The Stingray Nebula is disappearing

Posted by Eleanor Imster and Deborah Byrd in Space | December 3, 2020

The Hubble Space Telescope has captured never-before-seen images of the rapid fading of the Stingray Nebula. This nebula is a cloud in space, surrounding a dying star. 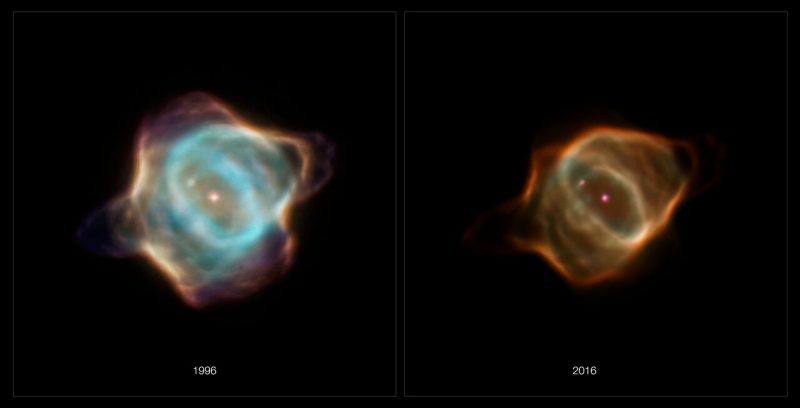 Here is the Stingray Nebula as seen by the Hubble Space Telescope in 1996 (left) and in 2016 (right). The Stingray is located in the direction of the southern constellation Ara. What’s causing it to fade so fast? Image via NASA/ ESA/ B. Balick/ M. Guerrero/ G. Ramos-Larios.

Twenty years is a blip on a cosmic time scale. In outer space, most things take a very long time to happen. That’s why astronomers sounded surprised yesterday (December 3, 2020) when they announced that two images – acquired 20 years apart – show a distinct fading for a distant cloud in space, known as the Stingray Nebula, located some 18,000 light-years away. Images from 2016 show a nebula that has drastically faded, in contrast to images from 1996. Plus, shells of gas that surrounded this nebula’s central star have changed; they no longer appear as crisp as they once did. The astronomers’ statement – posted at HubbleSite on December 3, 2020 – said:

Changes like this have never been captured at this clarity before … Lucky for us, it seems as if the Stingray Nebula [aka Hen 3-1357] was destined to stand out from the crowd since its beginnings. It was dubbed the youngest known planetary nebula in 1998 after Hubble caught a rare peek at the central star’s final stages of life.

Now, 20 years after its first snapshot, the Stingray Nebula is capturing the attention of astronomers again for a very different reason …

Images captured by Hubble in 2016, when compared to Hubble images taken in 1996, show a nebula that has drastically dimmed in brightness and changed shape. Bright blue fluorescent tendrils and filaments of gas toward the center of the nebula have all but disappeared, and the wavy edges that earned this nebula its aquatic-themed name are virtually gone. The young nebula no longer pops against the black velvet background of the vast universe.

The Stingray Nebula is a planetary nebula; in this case, the name has nothing to do with planets. These clouds in space came to be called planetary because they looked round, like little disks, through early telescopes. Today, we know there are dying stars at the centers of planetary nebulae. The nebula is a a shroud for the star, if you will. As it dies, the star puffs off its outer layers. Astronomers always knew these clouds were temporary. They just didn’t know they could fade so quickly in brightness, on such a human timescale. Team member Martín A. Guerrero of the Instituto de Astrofísica de Andalucía in Granada, Spain, said in the astronomers’ statement:

This is very, very dramatic, and very weird. What we’re witnessing is a nebula’s evolution in real time. In a span of years, we see variations in the nebula. We have not seen that before with the clarity we get with this view.

Researchers also discovered unprecedented changes in the light emitted by glowing nitrogen, hydrogen and oxygen being blasted off by the dying star at the center of the nebula, the astronomers said. They said:

Astronomer Bruce Balick at the University of Washington has spent his career studying planetary nebulae. He is leader of the new research. He said:

Changes in nebulae have been seen before, but what we have here are changes in the fundamental structure of the nebula. In most studies, the nebula usually gets bigger. Here, it’s fundamentally changing its shape and getting fainter, and doing so on an unprecedented time scale. Moreover, to our surprise, it’s not growing any larger. Indeed, the once-bright inner elliptical ring seems to be shrinking as it fades.

The researchers believe the fading of the nebula doesn’t correlate with the nebula’s dissipating into space (as might be expected to happen, but over a much-longer timescale). Instead, they said the fading might be linked to the nebula’s central star, called SAO 244567. They said:

… the nebula’s rapid changes are a response to its central star, SAO 244567, expanding due to a temperature drop, and in turn emitting less ionizing radiation.

They said they didn’t know how long it would take for the nebula to fade to invisibility in earthly telescopes. At its present rates of fading, they estimate, the nebula will be barely detectable in 20 or 30 years.

Source: The Fall of the Youngest Planetary Nebula, Hen3-1357