Posted by
Christopher Crockett
and

NASA’s Dawn spacecraft is providing researchers with the first looks into the second largest asteroid in the solar system, 4 Vesta.  In a series of papers published in the Journal Science on May 10, 2012, the new findings reveal that Vesta is a protoplanet with complex landscapes and is home to one of the largest mountains in the solar system.  The findings also confirm that a massive collision in Vesta’s past is the source of a common type of meteorite found on Earth.

Images from the spacecraft show that Vesta’s southern hemisphere is dominated by a massive impact crater – roughly 90% the diameter of the entire asteroid.  At almost 20 km deep and 500 km across, it ranks as one of the largest such craters known in our solar system; the Big Island of Hawai’i would fit comfortably inside.  Named Rheasilvia – after the mythical mother of the twin founders of Rome, Romulus and Remus – the bowl-shaped depression is dominated by an enormous central mountain that rivals Mars’ Olympus Mons as the largest in the solar system.  At 20-25 km in height, it is equivalent to stacking two and a half Mt. Everests on top of each other.

Based on crater counts in the basin and the surrounding terrain, researchers estimate that the crater is the result of a collision with another asteroid sometime in the past one billion years – approximately one-fifth the age of our planet.  The impact demolished half of an older, slightly smaller crater in the vicinity.  The second crater, named Veneneia after one of the founding Vestal Virgins, shows rolling landscapes within a 12 km deep semicircular bowl-shaped region delineated by sharp 10 km high scarps.  The walls of this crater are roughly as high as the deepest part of Earth’s oceans.

Astronomers estimate that the collision which produced the Rheasilvia crater most likely launched about one percent of Vesta’s volume into space.  Both impacts are now leading candidates for what is known as the Vesta family of asteroids – a collection of some 6000 objects in the asteroid belt, of which Vesta is the largest, that all share similar orbits around the Sun.  Furthermore, by using spectroscopic analysis – where reflected light from Vesta is broken up into its component wavelengths – Dawn scientists have been able to map the mineralogy of Vesta’s surface and confirm that these collisions are the most probable source of the HED meteorites.  Composed of the minerals howardite, eucrite, and diegenite (from which they get their name), these make up roughly 5% of the meteorites which have fallen to Earth’s surface.

Studies of Vesta are important to furthering our understanding of the formation and evolution of the solar system.  Vesta shows many signs of being a remnant protoplanet – a fossil from the solar system’s formative years which has managed to survive mostly intact to this day.  On its surface, Vesta carries a record of the cataclysmic development of our solar system.  Studies of its mineralogy and its layered composition – which most likely includes an iron-nickel core similar to Earth – can provide hints about the environment in which the planets were born.

Discovered by Henrich Olbers in 1807, Vesta is the second most massive body in the asteroid belt, the rocky debris field between Mars and Jupiter.  Named after the Roman goddess of home and hearth, Vesta was the fourth asteroid to be discovered.  The Dawn spacecraft, operated for NASA by the Jet Propulsion Laboratory (JPL), launched in 2007 and arrived at Vesta on July 16, 2011.  It will continue to orbit Vesta until August 26, 2012 at which point it will depart for the largest body in the asteroid belt, the dwarf planet Ceres.  Upon arrival at Ceres, Dawn will become the first spacecraft to orbit two separate bodies in the solar system. 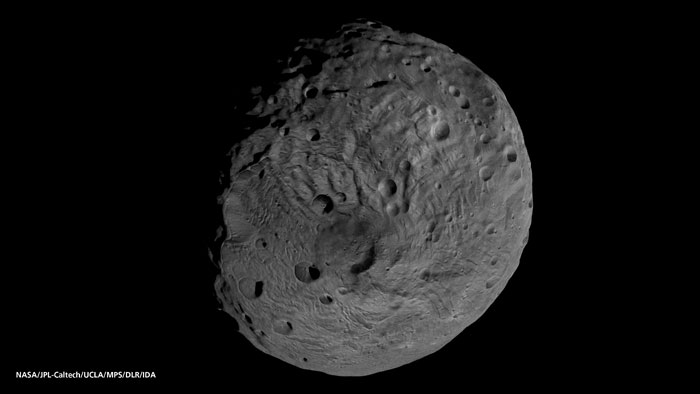 Bottom line: A series of papers published in the journal Science on May 10, 2012 present results from the Dawn spacecraft that show Vesta, the second largest object in the asteroid belt, to be a diverse world.  Two massive impact craters in Vesta’s southern hemisphere reveal themselves to be the source of the Vesta asteroid family.  Spectroscopic analysis confirms that these impacts are the source of HED meteorites found on Earth.

TwitterFacebookPinterestBufferShare
Posted
May 15, 2012
in
Space

Thank you! Your submission has been received!
Oops! Something went wrong while submitting the form.
END_OF_DOCUMENT_TOKEN_TO_BE_REPLACED

What do redshifts tell astronomers?