Scientists used data sonification to transform a photo of the now-silent Opportunity rover’s 5,000th sunrise on Mars into a piece of music.

Scientists used what is called data sonification techniques to create the soundtrack you’ll hear in the video above. The sounds are based on data gathered by a now-silent robotic Mars rover – Opportunity – as it witnessed its 5,000th Mars sunrise on Mars. Domenico Vicinanza of Anglia Ruskin University and Genevieve Williams of the University of Exeter created the piece of music – which they call Mars Soundscapes – and presented it at the NASA booth at the Supercomputing SC18 Conference in Dallas in mid-November, 2018.

They created the music by scanning a picture from left to right, pixel by pixel, and looking at brightness and color information. Then they combined that information with terrain elevation. They used algorithms to assign each element a specific pitch and melody. A statement about the piece of music from Anglia Ruskin University explained:

The quiet, slow harmonies are a consequence of the dark background and the brighter, higher pitched sounds towards the middle of the piece are created by the sonification of the bright sun disk.

It’s an interesting and sometimes beautiful piece of music, and a poignant tribute to Opportunity, which has been sitting silent on Mars’ surface since last June after a Mars dust storm went global and swept over it. 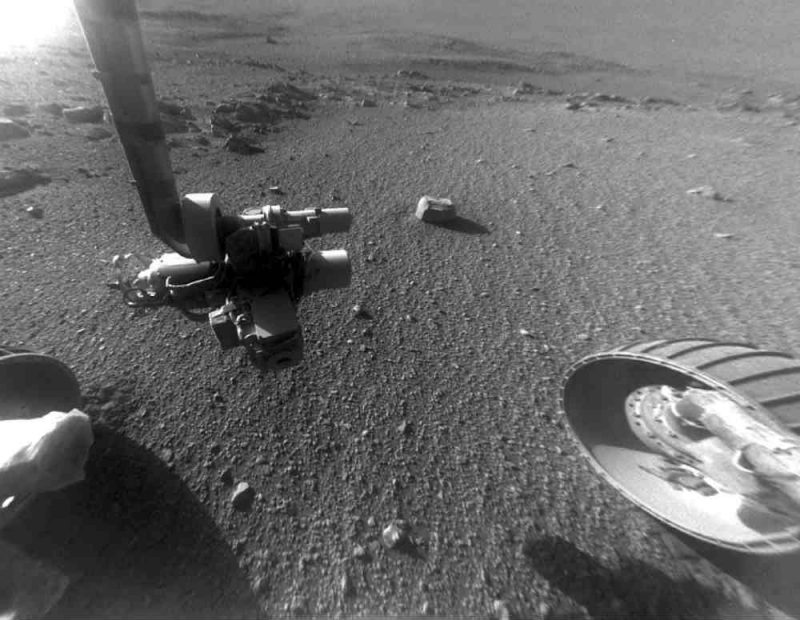 Here’s a view from the Opportunity rover on Sol 4958 (January 4, 2018), the rover’s 4,958th day on Mars. The rover was inside Mars’ Perseverance Valley, on the inner slope of the western rim of Endeavour Crater. Notice the pattern of rock stripes on the ground; they were a surprise to scientists. Image via NASA/NinePlanets.

NASA is still attempting to hail Opportunity, so far without success.

Prior to going silent, the solar-powered Opportunity was the longest-running rover mission on Mars. It saw its 5,000th Mars sunrise on February 16, 2018, marking its 5,000th sol (5,137.46 Earth days) on Mars. Oppotunity was originally planned as a 90-sol mission.

From its position on the western rim of Endeavour Crater, Opportunity’s 5,000th sunrise appeared over the basin’s eastern rim, about 14 miles (22 km) away. This location, one-third of the way down Perseverance Valley, is more than 28 miles (45 km) from Opportunity’s original landing site.

We hope we haven’t heard the last from Opportunity, but, if we have, this piece of music will become part of its expansive legacy.

Bottom line: Scientists used data sonification to transform a photo of the Opportunity rover’s 5,000th sunrise on Mars into a piece of music.