Curiosity finds strange object on the surface of Mars

The Mars Curiosity rover captured images of this strange object on the planet’s surface on August 13. What is it? NASA scientists have figured it out. 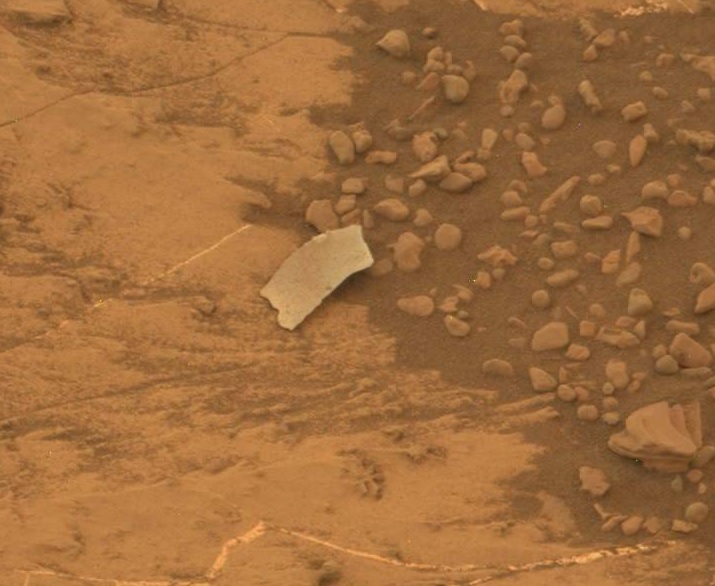 This small object got the attention of Mars Curiosity mission scientists this past week. NASA scientists say they were finally able to figure out what the strange fragment is.

Images captured on Monday (August 13, 2018) by the Curiosity rover’s camera show an object that looks perhaps like masking tape or a piece of peeled-off paint. Scientists initially speculated that the mysterious chunk, which they referred to as Pettegrove Point Foreign Object Debris, was a piece of spacecraft debris, or part of Curiosity itself. But now they’ve determined that it’s of natural origin.

It was analyzed by Curiosity’s ChemCam, an instrument that uses a laser and spectrometer. Results showed the object is a very thin flake of rock. “False Alarm,” said the mission team, who had initially though they’d found some kind of interesting object on the surface of Mars.

Although it turns out that this object isn’t related to the search of past or present life on Mars, Curiosity has made significant discoveries recently. For example, the rover found evidence on Martian rocks which suggests the neighbor planet could have supported ancient life. The rover’s data reveal a water lake inside Gale Crater held all the ingredients necessary for life, including chemical building blocks and energy sources.

Curiosity is also observing the Martian atmosphere to monitor the current dust storm on Mars, which is now abating. The plutonium-fueled rover has been exploring the Mars surface since August 2012.

Bottom line: A strange-looking object photographed by the Mars Curiosity rover has turned out to be a piece of rock.