At a NASA symposium this week, space scientists and engineers presented an exciting new concept for a lander that would explore Pluto by “hopping” across its surface. 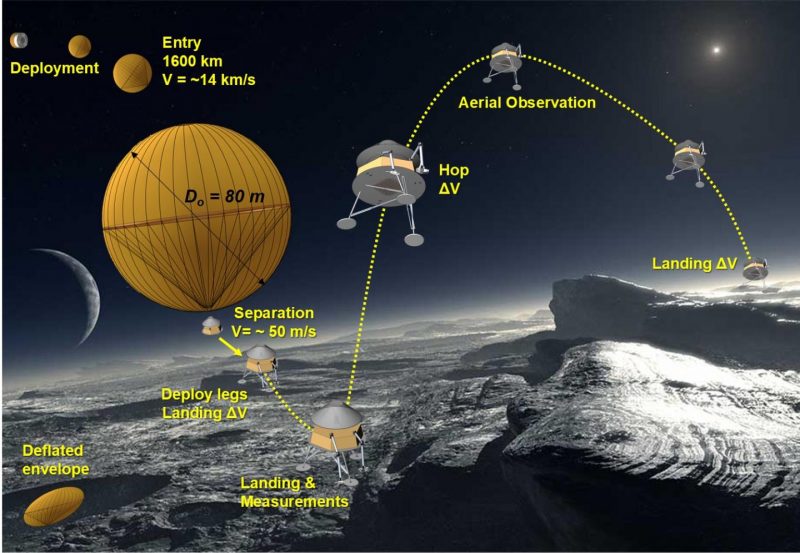 Illustration depicting how the Pluto lander would land on the surface and then “hop” to different locations. Image Credit: L. Calçada of European Southern Observatory (ESO)/ AmericaSpace.

This article was originally published at Americaspace.com. Reprinted here with permission.

In 2015, the New Horizons spacecraft provided our first up-close look at Pluto and its moons, helping to transform our knowledge about these small, cold worlds in the outer fringes of the solar system. The only downside, if there were one, was that it was a flyby mission, meaning New Horizons would zip past Pluto and then continue on deeper into the Kuiper Belt. Since then, there has been growing advocacy for a return mission such as an orbiter, or perhaps even a lander.

This week – at the NASA Innovative Advanced Concepts (NIAC) Symposium (September 25-27, 2017) in Denver, Colorado – Global Aerospace Corporation (GAC) presented a concept mission for a Pluto lander. As currently envisioned, the probe would land on Pluto using drag from the super-thin atmosphere and a few pounds of propellant. Then, it could explore the surface further by hopping from one location to another, using Pluto’s low gravity. The probe would be capable of traveling tens or even hundreds of kilometers at a time and features of interest could be studied up close at many different locations. The entrycraft, as it is called, would need to be almost the size of a football field in order to bring the lander to the surface.

According to GAC, the mission could be launched as soon as 12 years from now. 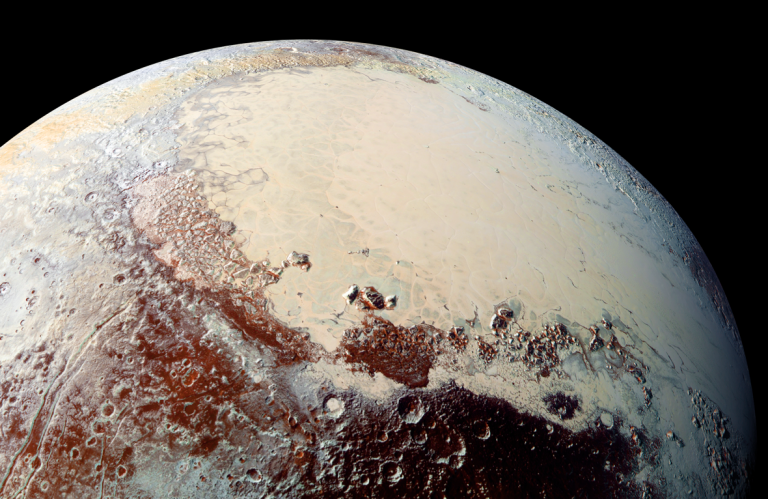 High-resolution view of Pluto from New Horizons. The large smoother area of ice in Sputnik Planum is the western lobe of the heart-shaped feature. Image via NASA/ JHUAPL/ SwRI. 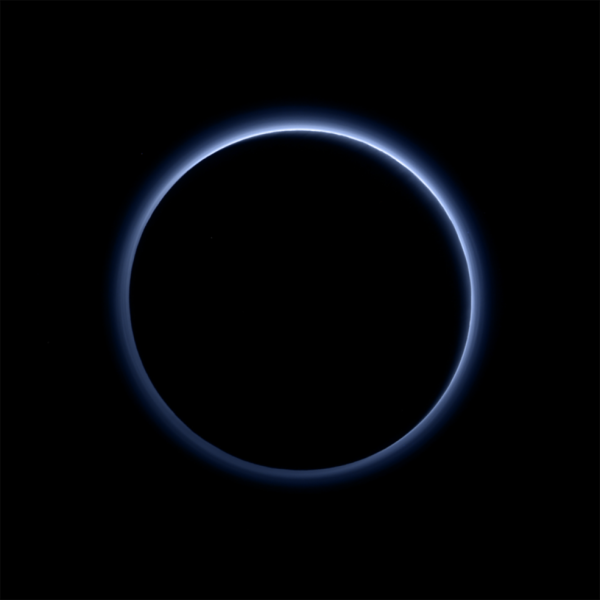 One of the most iconic images of the New Horizons mission to Pluto, acquired after closest approach, with Pluto backlit by the sun. Image via NASA/ JHUAPL/ SwRI. 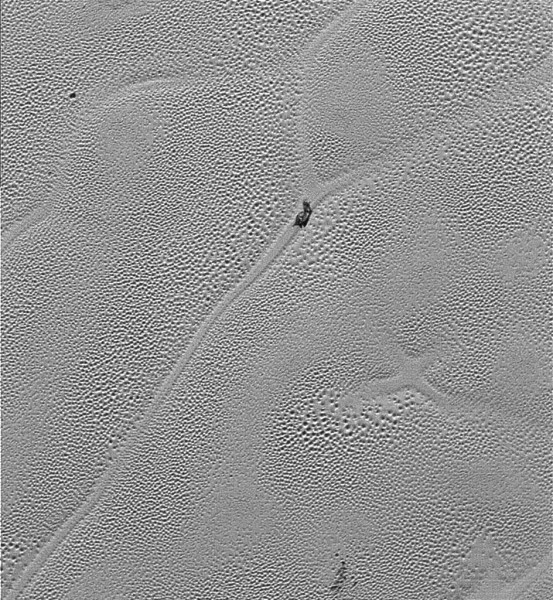 A lone “iceberg” of water ice floats in the nitrogen ice sea of Sputnik Planum. Image via NASA/ JHUAPL/ SwRI. 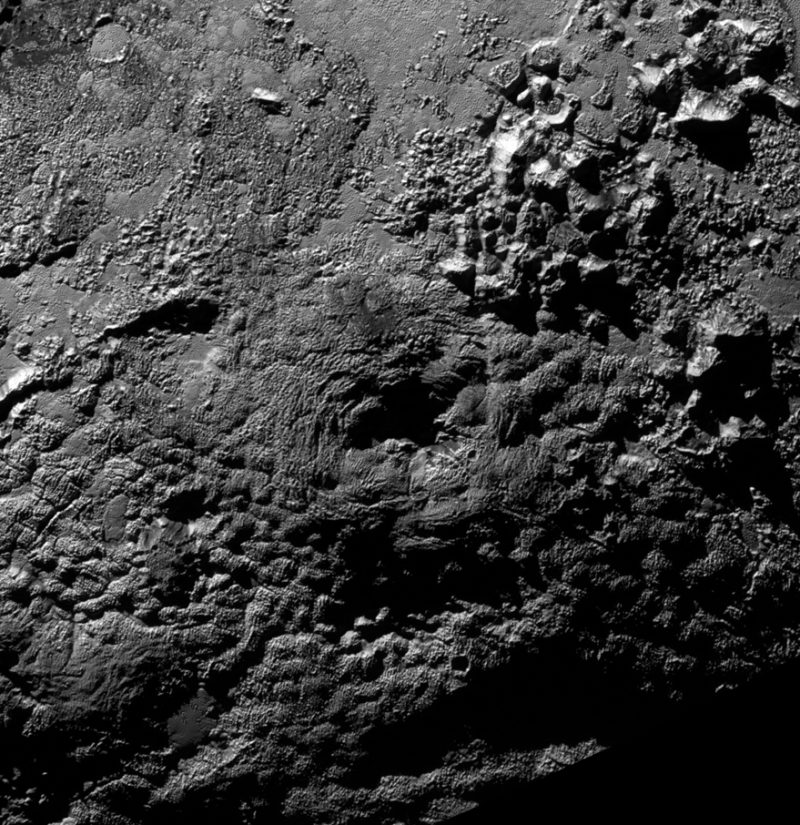 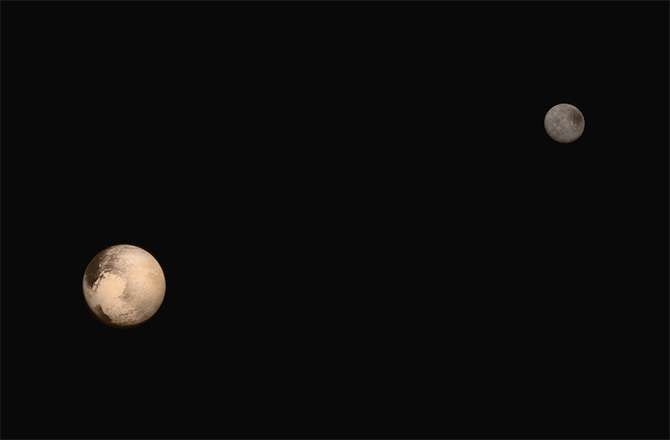 Pluto’s surface pressure is just 10 millionths of Earth’s, but its atmosphere is extremely spread out, extending about 1,000 miles above the surface. This extended and ultra-low-density atmosphere is ideal for dissipating large amounts of kinetic energy by means of aerodynamic drag, but the key is making the drag area very large while keeping system weight at a minimum.

Some goals of the mission would be to:

– Shed new light on its origins and relationship to other Kuiper Belt objects and other planets.
– Characterize the dynamics between the subsurface and the atmosphere by investigating outgassing processes such as cryovolcanism.
– Expand the understanding of surface geomorphology from multiple locations (on approach, during descent, and at the surface).
– Use in-situ sampling to study the nature of the its crust and search for hypothesized liquid water oceans.
– Validate New Horizons measurements including atmospheric pressure and temperature profiles.

New Horizons was an exciting mission, even if it only offered a brief look at the Pluto system. But that brief glimpse showed that Pluto is an active world, with nitrogen ice seas and glaciers, water ice mountains with methane snow, tall spikes of ice, ancient rivers and lakes of liquid nitrogen, a hazy atmosphere and possible cryovolcanoes (ice volcanoes). There may even be a subsurface ocean of water. Pluto’s largest moon, Charon, also appears to have had a subsurface ocean, but it is completely frozen now. It is a bizarre and intriguing place, begging for a return mission to explore its mysteries further. An orbiter would be a phenomenal follow-up to New Horizons, and a lander even more so. Pluto was once just a tiny point of light only visible to the largest telescopes, but now it is an incredible world just waiting to be explored in-depth. 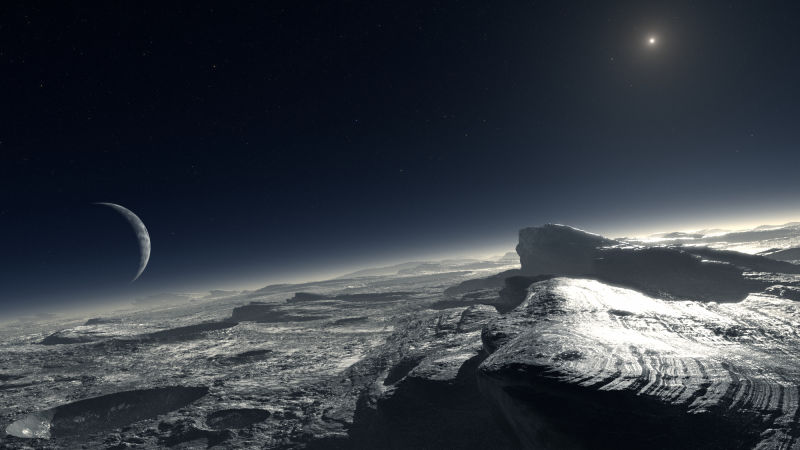 An early artist’s conception of what the surface of Pluto might look like. With a Pluto lander, we could see it for real. Image image ESO/ L. Calcada.

Bottom line: Originally called the Pluto Hop, Skip and Jump mission, this new concept for a Pluto lander was announced by NASA in April, 2017 as a Phase I selection in the NIAC program.