And last week mission scientists filed a flight plan for New Horizons’ next flyby – of the Kuiper Belt object 2014 MU69 – in early 2019. It’ll be farthest encounter yet between an earthly spacecraft and distant solar system body.

This image shows New Horizons’ current position along its full planned trajectory. The green segment of the line shows where New Horizons has traveled since launch; the red indicates the spacecraft’s future path. Positions of stars with magnitude 12 or brighter are shown from this perspective, which is slightly above the orbital plane of the planets. Via Johns Hopkins’ page Where is New Horizons?

NASA’s New Horizons spacecraft – which visited Pluto in July, 2015 – was placed in hibernation on April 7, 2017. The craft is set to be awoken today (September 11, 2017). In the meantime, the science and mission operations teams have been developing detailed command loads for New Horizon’s next encounter, a nine-day flyby of the Kuiper Belt object 2014 MU69 on New Year’s Day, 2019. Among other things, the mission has now set the flight plan and the distance for closest approach, aiming to come three times closer to MU69 than it famously flew past Pluto in 2015.

Hibernation reduced wear and tear on the spacecraft’s electronics, lowered operations costs and freed up NASA Deep Space Network tracking and communication resources for other missions. But New Horizons mission activity didn’t entirely stop during the hibernation period. While much of the craft is unpowered during hibernation, the onboard flight computer has continued to monitor system health and to broadcast a weekly beacon-status tone back to Earth. About once a month, the craft has sent home data on spacecraft health and safety. Onboard sequences sent in advance by mission controllers will eventually wake New Horizons to check out critical systems, gather new Kuiper Belt science data, and perform any necessary course corrections.

2014 MU69 will soon become the only Kuiper Belt object ever to be visited by a spacecraft. It’ll be the farthest planetary encounter in history – some one billion miles (1.5 billion km) beyond Pluto and more than four billion miles (6.5 billion km) from Earth. If all goes as planned, New Horizons will come to within just 2,175 miles (3,500 km) of MU69 at closest approach, peering down on it from celestial north. The alternate plan, to be employed in certain contingency situations such as the discovery of debris near MU69, would take New Horizons within 6,000 miles (10,000 km)— still closer than the 7,800-mile (12,500-km) flyby distance to Pluto. 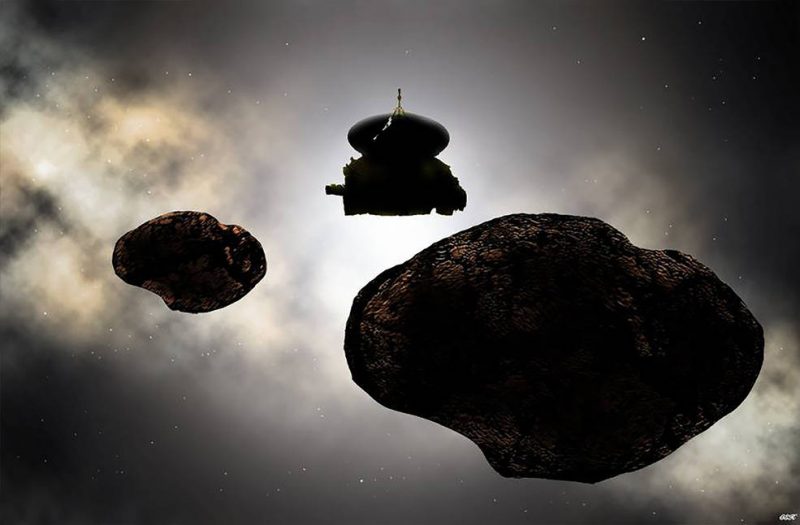 Artist’s concept of New Horizons spacecraft flying by a possible binary 2014 MU69 on January 1, 2019. Early observations of MU69 hint at the Kuiper Belt object being either a binary orbiting pair or a contact (stuck together) pair of nearly like-sized bodies with diameters near 12 and 11 miles (20 and 18 km). Image via Carlos Hernandez/ NASA.