Astronomers detected a new, nearby, repeating fast radio burst, originating from a spot near the great spiral galaxy M81. 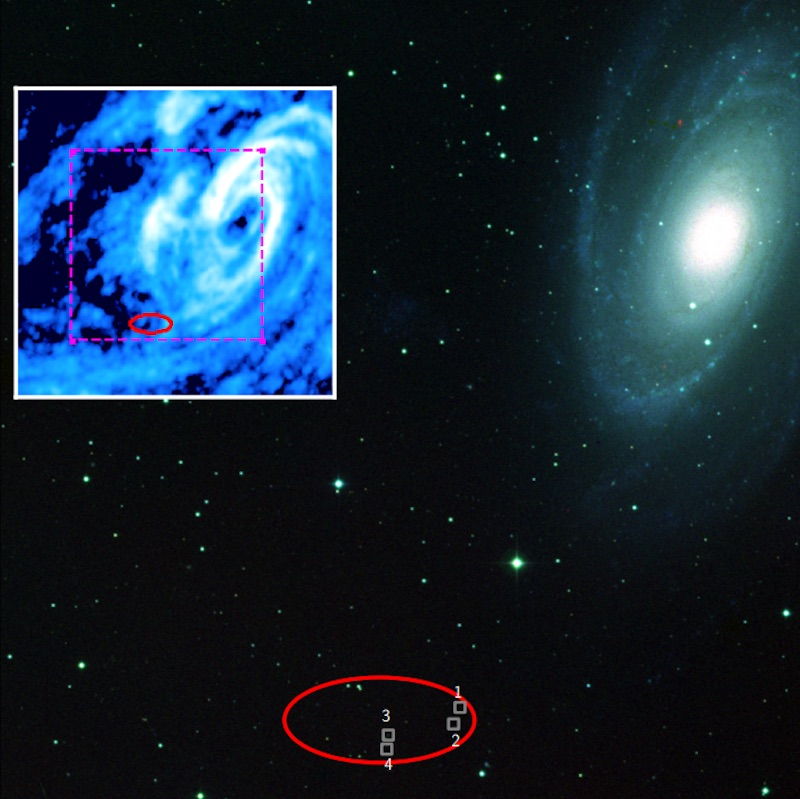 The galaxy in the top right is M81. The square insert (top left) shows the extent of hydrogen gas surrounding this galaxy. The red oval indicates the region of origin for the fast radio burst, “to a likelihood of 90%,” these astronomers said. Within this region there are 4 known entities that could have spawned the bursts: an ionized gas region, an X-ray source, a globular cluster and a radio source. Image via DSS/ M. Bhardwaj et al.

Astronomers discovered the mysterious signals known as fast radio bursts (FRBs) as recently as 2007. The bursts are short and strong – on average only .001 of a second long – but with as much energy in that millisecond as our sun puts out in three days. Fast radio bursts aren’t uncommon, though. Astronomers believe that roughly 1,000 of them arrive at Earth each day. We don’t know yet what causes them, but ideas keep getting ruled out or strengthened as new research comes in.

On April 1, 2021, astronomers reported the discovery of a fast radio burst repeating three times (that they measured) during 2020: one burst in January, one in July and one in November, all from the same location on the sky. Not only did these bursts come from the same spot, but astronomers measured this spot to be near to us, cosmically speaking, in the region of space near the great spiral galaxy M81, which is less than 12 million light-years away. Finding nearby FRBs is extra useful in searches for their as-yet-unknown origin. This discovery makes this FRB possibly the closest extragalactic one found so far!

The astronomers published their results in the peer-reviewed Astrophysical Journal Letters on April 1, 2021. Mohit Bhardwaj at McGill University is the lead author of the paper. He told EarthSky:

This FRB is practically in our backyard! We can study the FRB source in great detail at various wavelengths. Therefore, it shows great promise in testing different progenitor models.

There is also a chance that the FRB came from even closer, from the outskirts of our Milky Way (one such was detected in April 2020). The way to measure how far away they are is to see how much the signal is spread out. The farther away from us the signal comes, the more interaction it had with electrons along the way that causes it to smear out. On the other hand, the less smeared out it is – that is, the sharper the spike of the signal – the closer it is. In this case, the spike is unusually narrow and could originate from somewhere between the outskirts of our galaxy and M81.

The closer the FRB source is, the more possibility there is of zeroing in on what causes FRBs. Thus this discovery is well equipped to help in this endeavor. The current leading candidate for the origin of FRBs is magnetars, the kind of neutron stars that harbor intensely powerful magnetic fields. 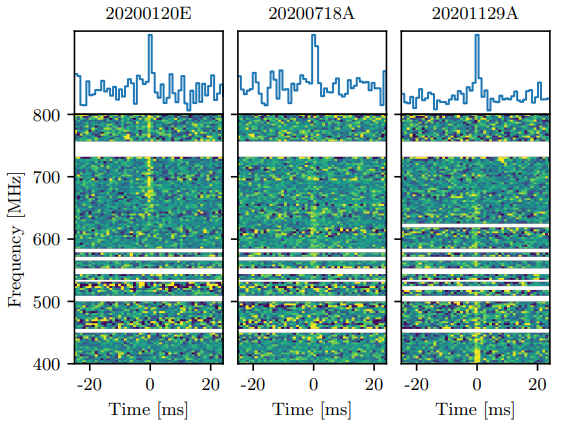 The 3 fast radio burst signals were detected in January, July and November 2020 from the same spot on the sky. This diagram shows the intensity of each spike. The fact that they are rather narrow (spiky, rather than rounded) indicates that they originate from a place close to us. The white bands are regions where artificial sources interfered with the data and had to be removed. Image via M. Bhardwaj et al. 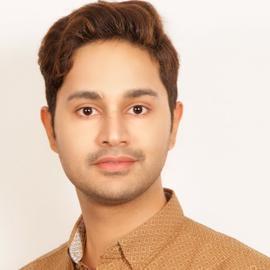 Mohit Bhardwaj at McGill University in Montreal is the lead scientist on the discovery of a repeating fast radio burst from a spot near the outskirts of spiral galaxy M81. Image via Mohit Bhardwaj.

The astronomers pinpointed the neighborhood of nearby spiral galaxy M81 (that is, nearby in astronomical terms, 12 million light-years from us) as the most likely host, however. Although M81 is somewhat different from other galaxies where FRBs have been found – for example, the region of the FRB is farther away from the galaxy than expected – the region where the FRB seems to originate harbors at least four known objects. These are: one region of ionized gas (an H II region), one globular cluster, one X-ray source and one radio source. There are reasons for each of these being a possible source of the repeating FRB, and the astronomers are calling for follow-up observations to learn more.

Bhardwaj explained to EarthSky why the location is special:

If the FRB is associated with M81, it’s surprising that it’s located at the outskirts of M81. There are no other localized repeating FRBs that have been discovered that far from their host galaxy. Having said that, it’s worth bearing in mind that the origin of FRBs is still very much a mystery, and we’re learning more about them with every new localization. 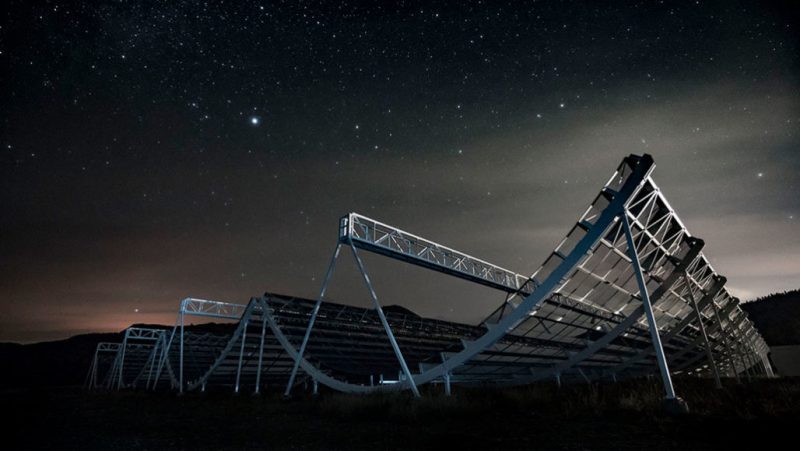 The astronomers used the Canadian Hydrogen Intensity Mapping Experiment radio telescope (CHIME) to measure the FRBs. This observatory is especially suitable for FRB detections, and as of mid-2020 CHIME had discovered more than 1000 FRBs. CHIME works well as a first-discovery instrument. Afterwards, other instruments can take over observing in varying wavelengths to find out more. For this project, the team has been monitoring this FRB daily with CHIME and other large and more sensitive radio telescopes located in the U.S. and Europe. They are now working on several follow-up observation programs to uncover the source of this FRB.

Bottom line: Astronomers have detected a repeating fast radio burst (FRB), likely originating from a region near spiral galaxy M81, which makes it the closest extragalactic FRB so far. The discovery can help shed light on the unknown origins of FRBs.

Source: A Nearby Repeating Fast Radio Burst in the Direction of M81