Magnetars are the most powerful magnets in the universe

Magnetars are the bizarre super-dense remnants of supernova explosions and the strongest magnets known in the universe. 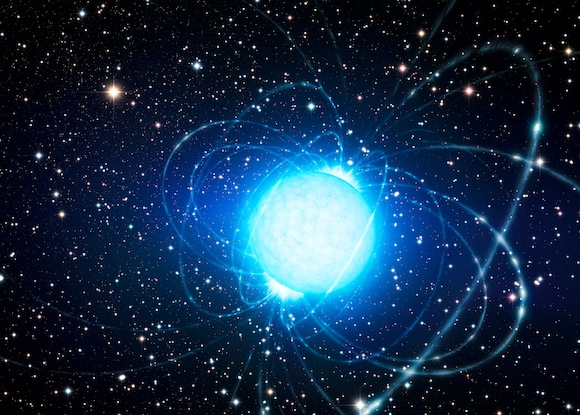 View full size. Artist’s impression of the magnetar in the star cluster Westerlund 1.

A team of European astronomers using ESO’s Very Large Telescope (VLT) now believe they’ve found the partner star of a magnetar for the first time. This discovery helps to explain how magnetars form — a conundrum dating back 35 years — and why this particular star didn’t collapse into a black hole as astronomers would expect.

When a massive star collapses under its own gravity during a supernova explosion it forms either a neutron star or black hole. Magnetars are an unusual and very exotic form of neutron star. Like all of these strange objects they are tiny and extraordinarily dense — a teaspoon of neutron star material would have a mass of about a billion tonnes — but they also have extremely powerful magnetic fields. Magnetar surfaces release vast quantities of gamma rays when they undergo a sudden adjustment known as a starquake as a result of the huge stresses in their crusts.

The Westerlund 1 star cluster [1], located 16 000 light-years away in the southern constellation of Ara (the Altar), hosts one of the two dozen magnetars known in the Milky Way. It is called CXOU J164710.2-455216 and it has greatly puzzled astronomers.

“In our earlier work (eso1034) we showed that the magnetar in the cluster Westerlund 1 (eso0510) must have been born in the explosive death of a star about 40 times as massive as the Sun. But this presents its own problem, since stars this massive are expected to collapse to form black holes after their deaths, not neutron stars. We did not understand how it could have become a magnetar,” says Simon Clark, lead author of the paper reporting these results.

Astronomers proposed a solution to this mystery. They suggested that the magnetar formed through the interactions of two very massive stars orbiting one another in a binary system so compact that it would fit within the orbit of the Earth around the Sun. But, up to now, no companion star was detected at the location of the magnetar in Westerlund 1, so astronomers used the VLT to search for it in other parts of the cluster. They hunted for runaway stars — objects escaping the cluster at high velocities — that might have been kicked out of orbit by the supernova explosion that formed the magnetar. One star, known as Westerlund 1-5 [2], was found to be doing just that. 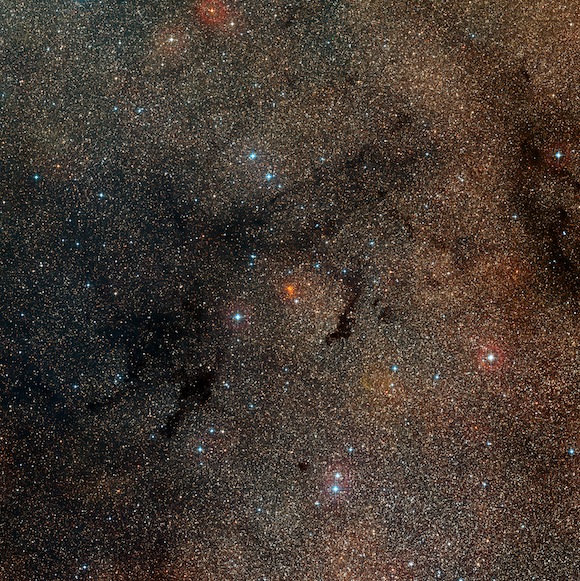 View full size.Wide-field view of the sky around the star cluster Westerlund 1

“Not only does this star have the high velocity expected if it is recoiling from a supernova explosion, but the combination of its low mass, high luminosity and carbon-rich composition appear impossible to replicate in a single star — a smoking gun that shows it must have originally formed with a binary companion,” adds Ben Ritchie (Open University), a co-author on the new paper.

This discovery allowed the astronomers to reconstruct the stellar life story that permitted the magnetar to form, in place of the expected black hole [3]. In the first stage of this process, the more massive star of the pair begins to run out of fuel, transferring its outer layers to its less massive companion — which is destined to become the magnetar — causing it to rotate more and more quickly. This rapid rotation appears to be the essential ingredient in the formation of the magnetar’s ultra-strong magnetic field.

In the second stage, as a result of this mass transfer, the companion itself becomes so massive that it in turn sheds a large amount of its recently gained mass. Much of this mass is lost but some is passed back to the original star that we still see shining today as Westerlund 1-5. 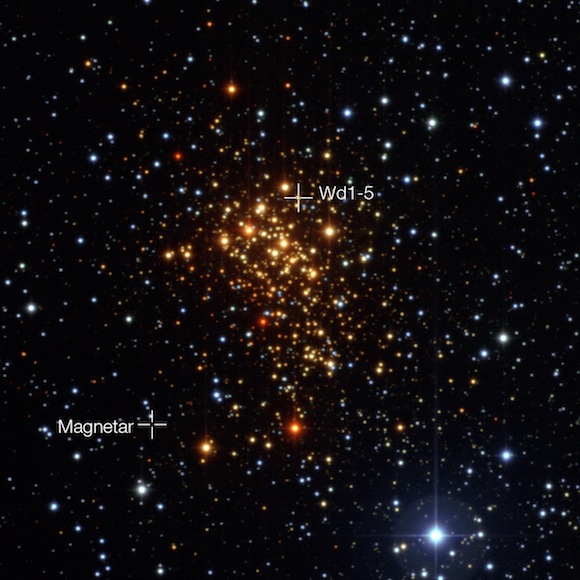 View full size.The star cluster Westerlund 1 and the positions of the magnetar and its probable former companion star.

“It is this process of swapping material that has imparted the unique chemical signature to Westerlund 1-5 and allowed the mass of its companion to shrink to low enough levels that a magnetar was born instead of a black hole — a game of stellar pass-the-parcel with cosmic consequences!” concludes team member Francisco Najarro (Centro de Astrobiología, Spain).

It seems that being a component of a double star may therefore be an essential ingredient in the recipe for forming a magnetar. The rapid rotation created by mass transfer between the two stars appears necessary to generate the ultra-strong magnetic field and then a second mass transfer phase allows the magnetar-to-be to slim down sufficiently so that it does not collapse into a black hole at the moment of its death.

Notes
[1] The open cluster Westerlund 1 was discovered in 1961 from Australia by Swedish astronomer Bengt Westerlund, who later moved from there to become ESO Director in Chile (1970–74). This cluster is behind a huge interstellar cloud of gas and dust, which blocks most of its visible light. The dimming factor is more than 100 000, and this is why it has taken so long to uncover the true nature of this particular cluster.

Westerlund 1 is a unique natural laboratory for the study of extreme stellar physics, helping astronomers to find out how the most massive stars in the Milky Way live and die. From their observations, the astronomers conclude that this extreme cluster most probably contains no less than 100 000 times the mass of the Sun, and all of its stars are located within a region less than 6 light-years across. Westerlund 1 thus appears to be the most massive compact young cluster yet identified in the Milky Way galaxy.

All the stars so far analysed in Westerlund 1 have masses at least 30–40 times that of the Sun. Because such stars have a rather short life — astronomically speaking — Westerlund 1 must be very young. The astronomers determine an age somewhere between 3.5 and 5 million years. So, Westerlund 1 is clearly a newborn cluster in our galaxy.

[3] As stars age, their nuclear reactions change their chemical make-up — elements that fuel the reactions are depleted and the products of the reactions accumulate. This stellar chemical fingerprint is first rich in hydrogen and nitrogen but poor in carbon and it is only very late in the lives of stars that carbon increases, by which point hydrogen and nitrogen will be severely reduced — it is thought to be impossible for single stars to be simultaneously rich in hydrogen, nitrogen and carbon, as Westerlund 1-5 is.