Jupiter’s Great Red Spot is a raging storm in the planet’s southern hemisphere. It’s more than three times the size of Earth! 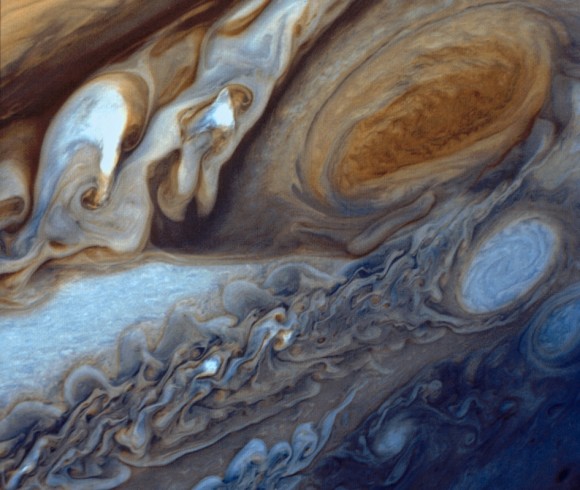 At about 89,000 miles in diameter, Jupiter could swallow 1,000 Earths. It is the largest planet in our solar system. Some say it’s the most majestic. It’s sometimes referred to as a failed star.

And on this amazing world, perhaps the most amazing feature is the Great Red Spot – a raging storm three and a half times the size of Earth located in Jupiter’s southern hemisphere. Vibrant bands of clouds carried by winds that can exceed 400 mph continuously circle the planet’s atmosphere. Such winds sustain spinning anticyclones like the Great Red Spot.

In January and February 1979, NASA’s Voyager 1 spacecraft zoomed toward Jupiter, capturing hundreds of images during its approach, including this close-up of swirling clouds around Jupiter’s Great Red Spot. This image was assembled from three black and white negatives. The observations revealed many unique features of the planet that are still being explored to this day.

Is Jupiter a failed star?