The International Astronomical Union approved the new names on November 26, and scientists used them while discussing other findings about Ceres at this week’s American Geophysical Union meeting.

The two most famous bright spots on Ceres have been given names. These once-mysterious spots are now thought by most scientists to be salt deposits. They’re now called Cerealia Facula (for the brighter of the two spots) and Vinalia Faculae (for the cluster of less reflective spots to the east). Both names are related to ancient Roman festivals. The German Aerospace Center (DLR) in Berlin created the new video above. It simulates the experience of flying around Occator crater, which contains the two bright spots.

The International Astronomical Union (IAU) approved the new names on November 26, 2016 and scientists used them while discussing other findings about Ceres at the American Geophysical Union meeting in San Francisco, December 12-16, 2016.

Ceres – re-classified as a dwarf planet by the IAU in 2006, at the same time Pluto was demoted from full planet status – was formerly called asteroid Ceres and was the first asteroid to have been discovered in 1801. It’s the largest body in the asteroid belt. The Dawn spacecraft is currently flying in an extended mission phase, in an elliptical orbit more than 4,500 miles (7,200 kilometers) from Ceres.

This image was taken by NASA’s Dawn spacecraft of dwarf planet Ceres on February 19, 2015 from a distance of nearly 29,000 miles (46,000 km). It showed the brightest spot on Ceres with a dimmer companion, and prompted a load of internet speculation. Image via NASA/JPL-Caltech/UCLA/MPS/DLR/IDA.

Scientists were also intrigued, and NASA had fun running a contest (What’s the Spot on World Ceres?) suggesting the spots might be related to volcanos? Geysers? Rock? Ice? Salt? Something unknown?

Subsequent studies of Ceres with Dawn revealed many bright spots, and a closer look by Dawn showed that the spots do look natural. They’re now thought to shine because of highly reflective salts.

Planetary scientist Ralf Jaumann, a Dawn co-investigator, said in a statement released by NASA on December 15, 2016:

The unique interior of Occator may have formed in a combination of processes that we are currently investigating. The impact that created the crater could have triggered the upwelling of liquid from inside Ceres, which left behind the salts. 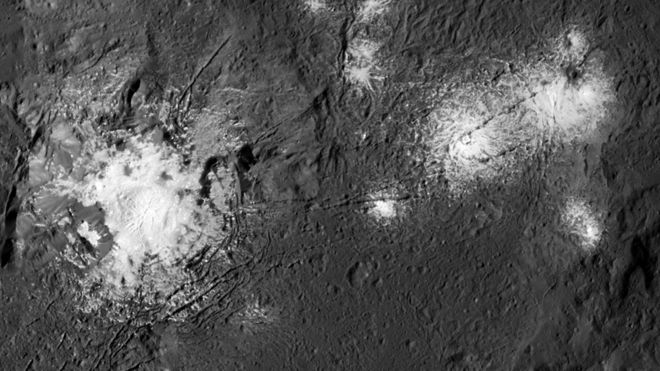 Ceres bright spots from Dawn’s closest orbit in 2016, just 240 miles (385 km) above its surface (lower than the International Space Station is above Earth). Image via NASA/JPL-Caltech/UCLA/MPS/DLR/IDA.

Bottom line: The two most famous bright spots on Ceres have been given names. These once-mysterious spots are now called Cerealia Facula (for the brighter of the two spots) and Vinalia Faculae (for the cluster of less reflective spots).