NASA said Cassini’s final flyby of Titan – Saturn’s large moon – went as planned. The spacecraft is now on a course that’ll take it inside Saturn’s atmosphere, for a fiery end to its mission, on September 15. 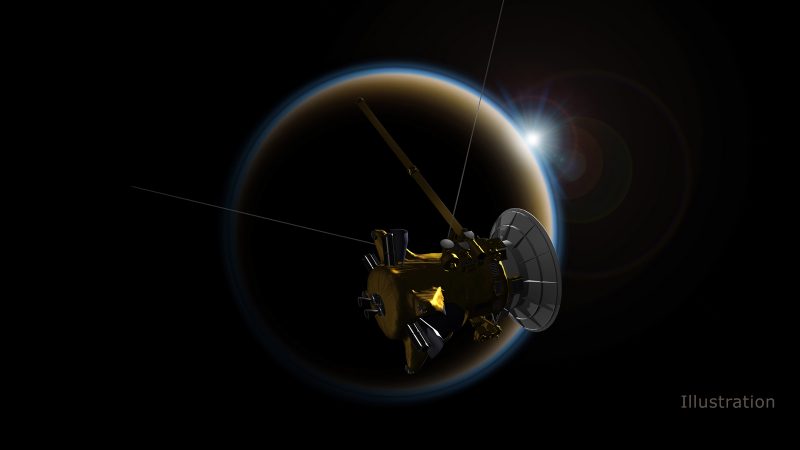 The Cassini spacecraft at Saturn made a final, distant flyby of the large moon Titan today (September 11, 2017). Mission engineers have been informally referring to this encounter as the goodbye kiss, because, as it occurs, Titan provides Cassini with a gravitational nudge that sends the spacecraft toward its dramatic ending in Saturn’s upper atmosphere this Friday, September 15. NASA said the Titan flyby went as planned today. The spacecraft made its closest approach to Titan at 19:04 UTC (3:04 p.m. EDT; translate to your time zone), at an altitude of 73,974 miles (119,049 km) above the moon’s surface.

Cassini is scheduled to make contact with Earth on September 12, at which time images and other science data taken during the encounter will begin streaming to Earth. Navigators will analyze the spacecraft’s trajectory following this downlink to confirm that Cassini is on course to dive into Saturn at the planned time, location and altitude.

How did the Titan flyby set the course for Cassini’s ultimate end? The geometry of the flyby caused Cassini to slow down slightly in its orbit around Saturn. This lowers the altitude of its flight over the planet so that the spacecraft goes too deep into Saturn’s atmosphere to survive, because friction with the atmosphere will cause Cassini to burn up.

Cassini has made hundreds of passes over Titan during its 13-year tour of the Saturn system — including 127 precisely targeted encounters — some at close range and some, like this one, more distant.

Cassini has been in a long-term relationship with Titan, with a new rendezvous nearly every month for more than a decade. This final encounter is something of a bittersweet goodbye, but as it has done throughout the mission, Titan’s gravity is once again sending Cassini where we need it to go.

Cassini is running out of fuel. That’s why it’s ending its 13-year tour of the Saturn system with an intentional plunge into the planet. It’s making the plunge – rather than just staying in orbit as a dead spacecraft – because, once the craft is entirely out of fuel, mission engineers can no longer control it. They want to prevent a possible future crash of the spacecraft into one of Saturn’s moons, in particular Enceladus, with its subsurface ocean and signs of hydrothermal activity. Cassini’s plunge into Titan on Friday ensures that Enceladus and the other moons will remain pristine for future exploration.

Read more: Cassini milestones this week before the final plunge