Cassini milestones before the final plunge

Posted by Eleanor Imster and Deborah Byrd in Space | September 11, 2017

Milestones for Cassini’s final week at Saturn. Today’s distant flyby of the large moon Titan will slow down the spacecraft enough so that – on Friday – Cassini will make its final plunge into Saturn’s atmosphere. 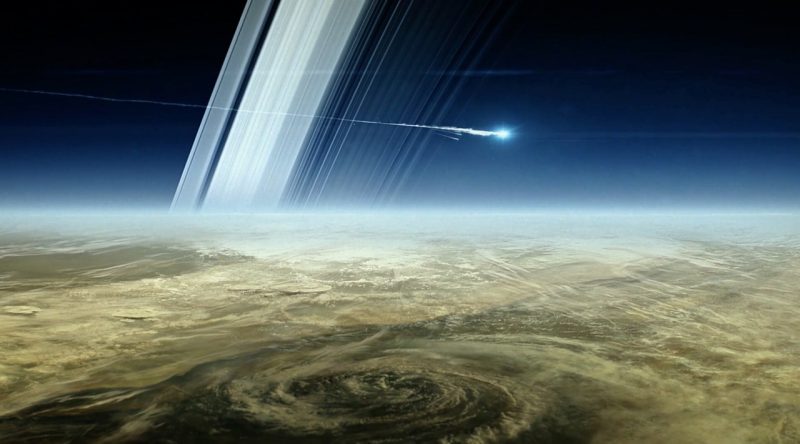 Artist’s concept of Cassini’s final plunge into Saturn on September 15, 2017.

After orbiting Saturn since 2004, the Cassini spacecraft is nearly out of fuel. It’ll plunge into Saturn’s dense atmosphere this Friday (September 15, 2017). In fact, a gravitational kick from Saturn’s moon Titan placed the two-and-a-half ton spacecraft on its path for impending destruction on April 22. Late last week, on September 9, Cassini made the last of its daring 22 passes between Saturn’s outer atmosphere and innermost rings. Closest approach was 1,044 miles (1,680 km) above the clouds tops. Yet the mission isn’t over until it’s over; here are the milestone for its final week (times are predicted and may change slightly; see this page at NASA for updated times).

September 11 Cassini will make a distant flyby of Saturn’s largest moon, Titan. Even though the spacecraft will be at 73,974 miles (119,049 km) away, the gravitational influence of the moon will slow down the spacecraft slightly as it speeds past. A few days later, instead of passing through the outermost fringes of Saturn’s atmosphere, Cassini will dive in too deep to survive the friction and heating.

September 14 A final day of observations. Cassini makes detailed, high-resolution observations of Saturn’s auroras, temperature, and the vortices at the planet’s poles. Cassini’s imaging cameras take their last look around the Saturn system, too, sending back images of moons Titan and Enceladus, the hexagon-shaped jet stream around the planet’s north pole and features in the rings. Cassini’s imaging camera will be off during the final descent, but, on the way down, before contact is lost, eight of Cassini’s 12 science instruments will be operating.

September 14 (5:45 p.m. EDT / 21:45 UTC) Cassini turns its antenna to point at Earth, begins a communications link that will continue until end of mission, and sends back its final images and other data collected along the way.

September 15 (4:37 a.m. EDT / 8:37 UTC) The “final plunge” begins. The spacecraft starts a 5-minute roll to position its instruments for optimal sampling of the atmosphere, transmitting data in near real time from now to end of mission.

September 15 (7:53 a.m. EDT / 11:53 UTC) Cassini enters Saturn’s atmosphere. It’s expected to lose radio contact with Earth within about one to two minutes after beginning its descent into Saturn’s upper atmosphere. Its thrusters fire at 10 percent of their capacity to maintain directional stability, enabling the spacecraft’s high-gain antenna to remain pointed at Earth and allowing continued transmission of data as long as possible.

September 15 (7:54 a.m. EDT / 11:54 UTC) Cassini’s thrusters are at 100 percent of capacity. Atmospheric forces overwhelm the thrusters’ capacity to maintain control of the spacecraft’s orientation, and the high-gain antenna loses its lock on Earth. At this moment, expected to occur about 940 miles (1,510 kilometers) above Saturn’s cloud tops, communication from the spacecraft will cease, and Cassini’s mission of exploration will have concluded. The spacecraft will break up like a meteor moments later.

Since its launch in 1997, the findings of the Cassini mission have revolutionized our understanding of Saturn, its complex rings, the amazing assortment of moons and the planet’s dynamic magnetic environment. The most distant planetary orbiter ever launched, Cassini started making astonishing discoveries immediately upon arrival and continues today. Icy jets shoot from the tiny moon Enceladus, providing samples of an underground ocean with evidence of hydrothermal activity. Titan’s hydrocarbon lakes and seas are dominated by liquid ethane and methane, and complex pre-biotic chemicals form in the atmosphere and rain to the surface. Three-dimensional structures tower above Saturn’s rings, and a giant Saturn storm circled the entire planet for most of a year. Cassini’s findings at Saturn have also buttressed scientists’ understanding of processes involved in the formation of planets.

Our final crossing between Saturn and the rings was successful. Track the spacecraft’s position at: https://t.co/u9rOyk3Ki7 #GrandFinale pic.twitter.com/Z93NpkAzUp

Bottom line: Mission milestones for Cassini’s final week. The spacecraft will make a final plunge into Saturn’s atmosphere on September 15, 2017.

Find out more about the Cassini mission here.