The surface features of brown dwarfs – objects midway in mass between planets and stars – can’t be seen. But researchers have found a way to reveal Jupiter-like stripes and bands in the atmosphere of the closest brown dwarf, Luhman 16B.

Recently, we showed you a cool new direct image taken of a brown dwarf, an object midway in mass between a planet and a star. But that image doesn’t show the brown dwarf’s surface features. No existing image does. These objects are too far away – and too dim – to reveal themselves in that way. Now, though, a brown dwarf’s surface appearance has been revealed by researchers. The new study indicates bands and stripes in the atmosphere of Luhman 16B – one of two objects in the Luhman 16 binary brown dwarf system – the closest known brown dwarfs to Earth at only 6.5 light-years. Scientists said their new technique for revealing the stripes and bands on Luhman 16B will also be useful someday in mapping surface features on Earth-like planets in distant solar systems. Now that would be something to see!

EarthSky lunar calendars are back in stock! We’re guaranteed to sell out. Get one while you can.!

In our solar system, the gas giant planets Jupiter and Saturn both sport stripes and bands. Scientists had wondered if brown dwarfs had any such stripes. Or would their atmospheres appear more chaotic? Based on the study of Luhman 16B, they believe that at least some brown dwarfs do have banded atmospheres.

As astronomer Daniel Apai at the University of Arizona – lead author of the new study – said in a statement:

We wondered, do brown dwarfs look like Jupiter, with its regular belts and bands shaped by large, parallel, longitudinal jets? Or will they be dominated by an ever-changing pattern of gigantic storms known as vortices like those found on Jupiter’s poles?

The researchers published the peer-reviewed study in The Astrophysical Journal on January 7, 2021.

The results provide a new glimpse of these mysterious worlds that are too massive to be considered planets, but not massive enough to ignite their nuclear fuel to become stars. And while it seems that brown dwarfs might look a lot like gas giant planets, at least in some cases, they’re still not planets. They are their own unique cosmic objects. 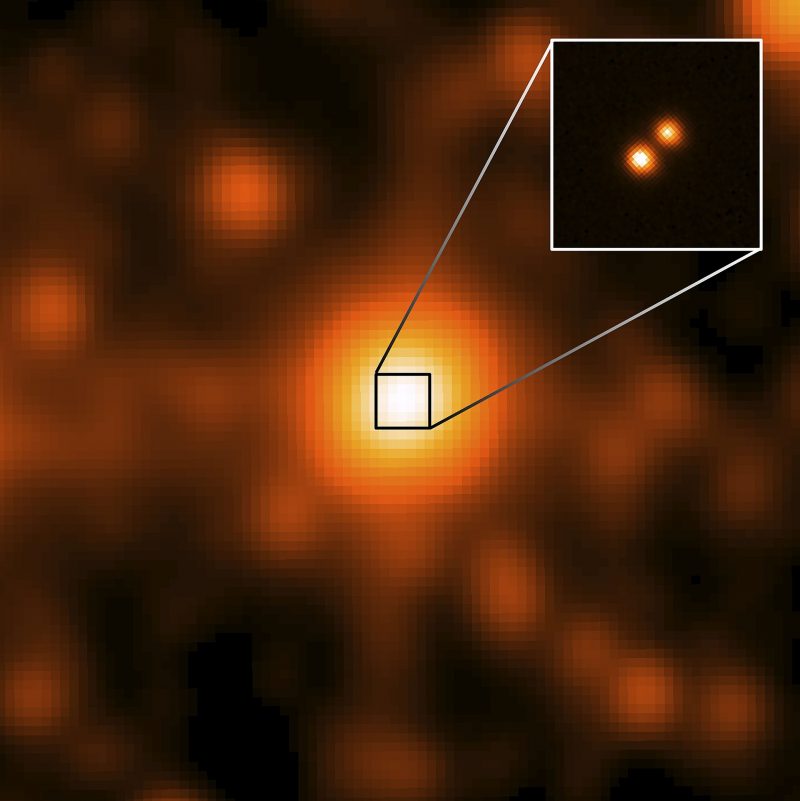 View larger. | WISE image of the brown dwarf binary system Luhman 16, closest known brown dwarfs to Earth at just over 6 light-years. This is the 3rd-closest-known system to our sun (after the Alpha Centauri system and Barnard’s Star). In the inset, the system is resolved into a pair. But no surface features are revealed for this brown dwarf system, or any other. Image via NASA Wide-field Infrared Survey Explorer (WISE).

Apai and his colleagues determined that Luhman 16B looks a lot like Jupiter. High-speed winds flow parallel to its equator, just like wind patterns on the gas giant. These winds help mix the atmosphere and redistribute heat that originates from deeper down. The researchers also found that there are vortex-type storms at the brown dwarf’s poles, also similar to what we see on Jupiter. While scientists didn’t know exactly what the atmospheres of brown dwarfs would look like, for the most part, some computer models had predicted an appearance quite similar to what was seen on Luhman 16B. Apai said:

Knowing how the winds blow and redistribute heat in one of the best-studied and closest brown dwarfs helps us to understand the climates, temperature extremes and evolution of brown dwarfs in general. 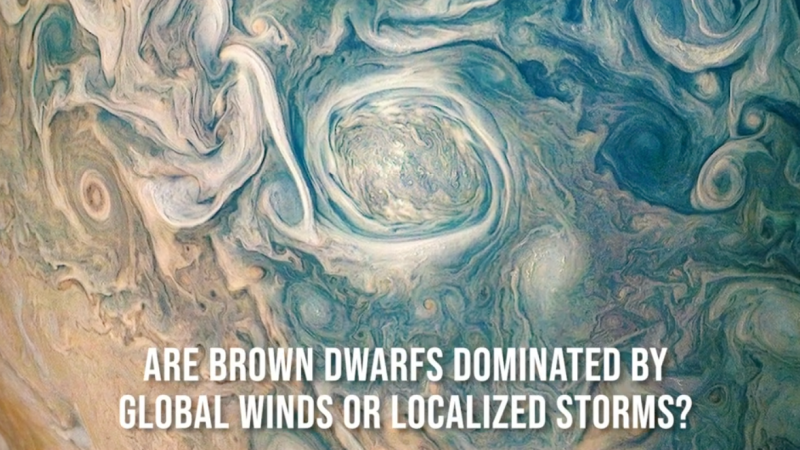 This is a section of Jupiter’s atmosphere. Jupiter – the biggest planet in our solar system – is dominated by global winds, giving it a banded appearance. But Jupiter also has localized vortices, vast storms, at its poles. Researchers have long wanted to know if brown dwarfs – objects midway in mass between Jupiter and a star – looked like Jupiter, with a striped or banded atmosphere. Or would brown dwarfs look more like our sun, with a chaotic atmosphere? See the image below. 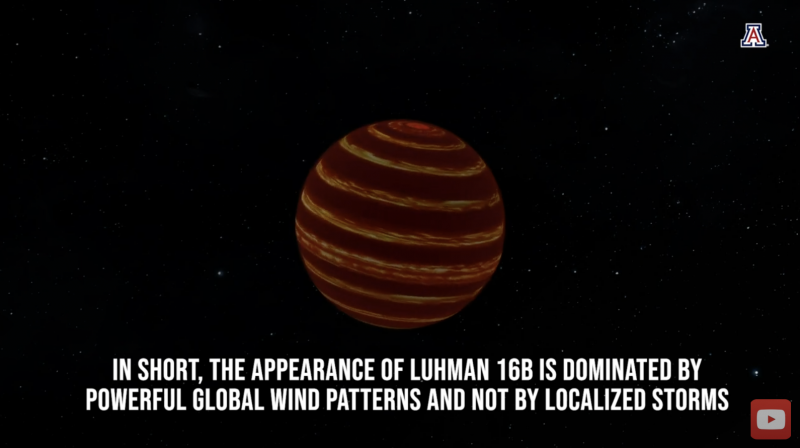 Brown dwarf surfaces can’t be seen directly. They’re too dim, and too far away, to reveal themselves in that way. So how did Apai and his team figure out what Luhman 16B looks like?

They used newly-developed algorithms designed for NASA’s Transiting Exoplanet Survey Satellite (TESS) to measure the brightness patterns of the two closest known brown dwarfs, Luhman 16A and Luhman 16B, only 6.5 light-years from Earth, and both about the size of Jupiter (but much more massive than Jupiter). Luhman 16A is approximately 34 times Jupiter’s mass, and Luhman 16B is about 28 times Jupiter’s mass. Luhman 16B is also about 1,500 degrees Fahrenheit (830 degrees Celsius) hotter than our sun (but still not hot enough to be a star). As Apai explained:

The TESS space telescope, although designed to hunt for extrasolar planets, also provided this incredibly rich and exciting dataset on the closest brown dwarf to us. With advanced algorithms developed by members of our team, we were able to obtain very precise measurements of the brightness changes as the two brown dwarfs rotated. The brown dwarfs get brighter whenever brighter atmospheric regions turn into the visible hemisphere and darker when these rotate out of view. 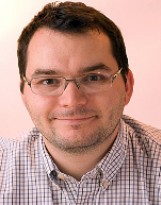 Even though TESS, or any other existing telescope, can’t see brown dwarfs in detail, the brightness of the brown dwarfs can be measured, which provides clues as to their appearance. Apai said:

No telescope is large enough to provide detailed images of [exo-]planets or brown dwarfs. But by measuring how the brightness of these rotating objects changes over time, it is possible to create crude maps of their atmospheres, a technique that, in the future, could also be used to map Earth-like planets in other solar systems that might otherwise be hard to see.

And that’s exciting, isn’t it?

In the case of Luhman 16B, the researchers were able to collect data from multiple rotations of the brown dwarf. This, and also the fact that TESS isn’t hindered by daylight, allowed the scientists to obtain the most detailed view of a brown dwarf’s atmosphere to date.

It’s a preliminary, but fascinating, look at these bizarre objects. This new method will allow astronomers to observe in more detail the atmospheres of other brown dwarfs as well as gas giant exoplanets, according to Apai:

Our study provides a template for future studies of similar objects on how to explore – and even map – the atmospheres of brown dwarfs and giant extrasolar planets without the need for telescopes powerful enough to resolve them visually. 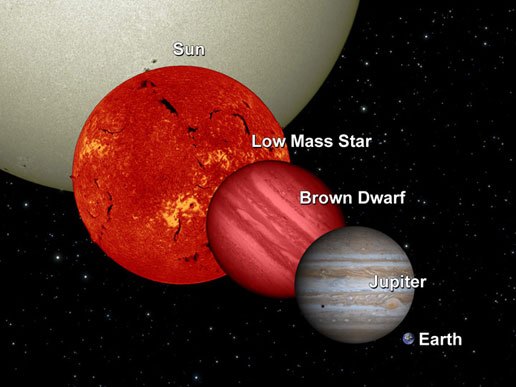 Brown dwarfs are unique objects, too massive to be considered planets, but not massive enough to become stars. Most are about the size of Jupiter, but much more massive. Image via NASA/ JPL-Caltech/ UCB/ Institute for Research on Exoplanets.

Being able to “see” these worlds in this way will help astronomers better understand how both brown dwarfs and gas giant exoplanets form and evolve. That data will also show in what ways these objects are similar, and how they are different. As we’ve seen with Luhman 16B, they may appear quite similar on the outside with their banded atmospheres, but what about deeper down? Are their compositions similar or significantly different?

In May 2020, astronomers using the Very Large Telescope in Chile found that Luhman 16B’s companion, Luhman 16A, also has a banded atmosphere, although with fewer but broader stripes. At the time, it was thought that Luhman 16B had patchy clouds, but now the new study shows it is banded as well, and likely has more bands than Luhman 16A, making it look even more like Jupiter than its companion.

Bottom line: New observations of the closest known brown dwarf show that it looks a lot like Jupiter, with bands of powerful jet streams in its atmosphere.