The Hubble Space Telescope has provided astronomers with the sharpest view yet of the breakup of comet C/2019 Y4 (ATLAS).

On Tuesday (April 28, 2020), the NASA/ESA Hubble Space Telescope released the sharpest views yet of the breakup of comet C/2019 Y4 (ATLAS). The space telescope images reveal roughly 30 fragments of the comet on April 20 – each about the size of a house – and 25 pieces on April 23. Prior to breaking up, the comet had been brightening, and many had hoped it would become bright enough to be seen with the eye alone. Those hopes are now dashed.

Astronomers using the ATLAS (Asteroid Terrestrial-impact Last Alert System) in Hawaii discovered Comet C/2019 Y4 (ATLAS) on December 28, 2019. It brightened quickly until mid-March, and some astronomers initially anticipated that it might be visible to the naked eye in May to become one of the most spectacular comets seen in the last two decades. However, the comet began to get fainter, leading astronomers to speculate that the icy core may be fragmenting, or even disintegrating. By April 11, ATLAS’s fragmentation was confirmed by amateur astronomer Jose de Queiroz, who photographed several pieces of the comet. 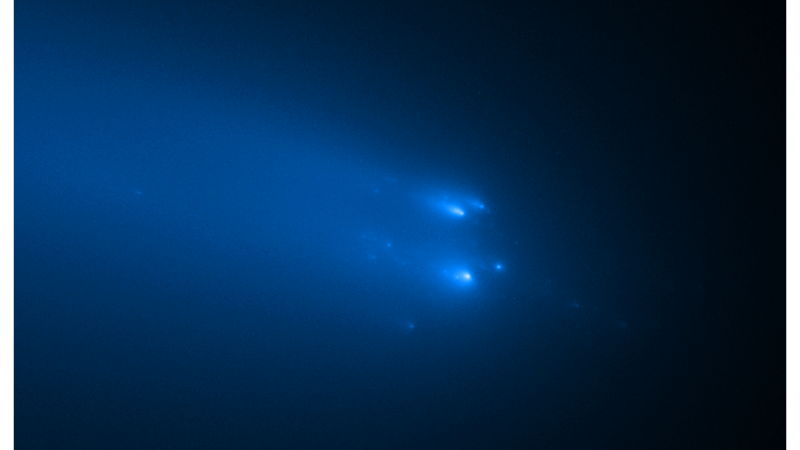 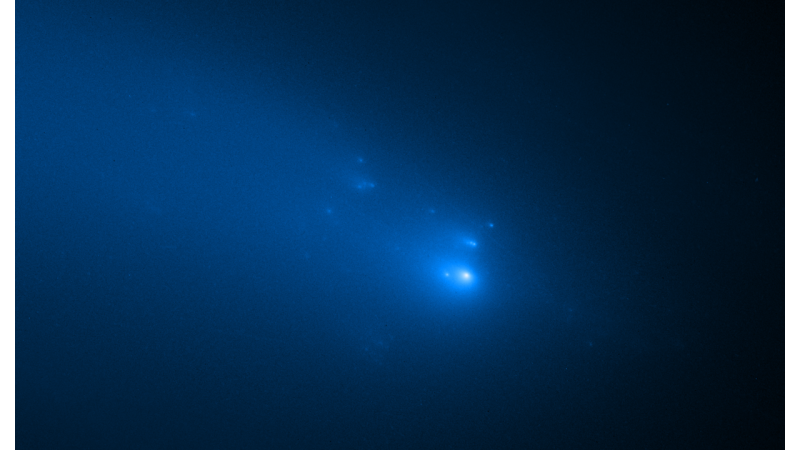 Hubble’s April 20 and 23 observations of the comet’s breakup show that the broken fragments enveloped in a sunlight-swept tail of cometary dust. These images provide further evidence that comet fragmentation is probably common and might even be the dominant mechanism by which the solid, icy nuclei of comets die. UCLA’s David Jewitt is leader of one of two Hubble teams who imaged the doomed comet. He said in a statement:

Their appearance changes substantially between the two days, so much so that it’s quite difficult to connect the dots. I don’t know whether this is because the individual pieces are flashing on and off as they reflect sunlight, acting like twinkling lights on a Christmas tree, or because different fragments appear on different days.

Because comet fragmentation happens quickly and unpredictably, reliable observations are rare, and astronomers remain largely uncertain about the cause of fragmentation. University of Maryland’s Quanzhi Ye, leader of the second Hubble observing team, said:

This is really exciting, both because such events are super cool to watch and because they do not happen very often. Most comets that fragment are too dim to see. Events at such scale only happen once or twice a decade.

Hubble’s crisp images may yield new clues to the breakup. The telescope has distinguished pieces as small as the size of a house. Before the breakup, the entire nucleus may have been no more than the length of two football fields (180 meters).

The disintegrating comet was approximately 91 million miles (146 million km) from Earth when the latest Hubble observations were taken. If any of it survives, the comet will make its closest approach to Earth on May 23 at a distance of about 72 million miles (116 million km), and eight days later it will skirt past the sun at 25 million miles (40 million km).