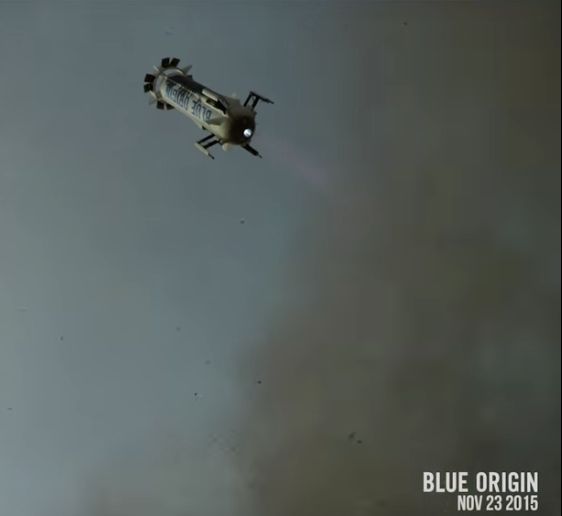 Video still from Blue Origin of the November 23, 2015 successful soft landing of its New Shepard rocket.

Blue Origin, a private spaceflight company founded by Amazon originator Jeff Bezos, says it has made a safe soft landing of its main rocket – called New Shepard – following a launch to sub-orbital space. Bezos tweeted the landing success; you can see this tweet (below) is also his first, ever, since (it’s said) he set up his Twitter account seven years ago. Blue Origin made the announcement of the successful soft landing early this morning (November 24, 2015) and simultaneously released the wonderful video attached to Bezos’ tweet. According to the video, the soft landing itself took place yesterday in West Texas.

The rarest of beasts – a used rocket. Controlled landing not easy, but done right, can look easy. Check out video: https://t.co/9OypFoxZk3

New Shepard climbed to an altitude of 329,839 feet, which is where the vehicle’s crew capsule is meant to detach. In actuality – at the November 23 launch – no people were onboard; notice the word “simulation” in that part of the video. If people had been aboard the capsule, though, they’d have experienced four minutes of weightlessness before falling back to Earth.

You can also see in the video that the crew capsule is designed to land its future passengers safely, using a series of parachutes.

But – since no people were riding along – the real excitement about this launch comes when the rocket’s main fuselage, which houses most of the fuel and the rocket’s engines, make its soft landing back on Earth. New Shepard uses a technique known as a propulsive landing, in which the rocket’s engines are reignited as the vehicle plummets to Earth.

And that makes all the difference. The engines help control the rocket’s descent. They not only slow it down, but also help keep the rocket upright.

By the way, SpaceX has been trying to soft-land its main rocket, the Falcon 9, for the past year, also using propulsive landing. SpaceX’s plan is for a vertical rocket landing on an autonomous drone spaceport in the ocean. Those landing attempts have all failed spectacularly so far. But SpaceX founder Elon Musk was gracious on Twitter, regarding Blue Origin’s achievement. He also pointed out in a series of tweets that going to sub-orbit is not the same as going to orbit.

It is, however, important to clear up the difference between "space" and "orbit", as described well by https://t.co/7PD42m37fZ

It is, however, important to clear up the difference between "space" and "orbit", as described well by https://t.co/7PD42m37fZ