“We were gobsmacked by what we saw in this system. It was completely unexpected … It tells us a little more about that big question: ‘How did we get here?'”

The National Radio Astronomy Observatory (NRAO) said on April 29, 2019, that astronomers have spied a relatively modest black hole, which nonetheless features jets of fast-moving material that are wobbling or precessing so fast their change in direction can be seen in only minutes. This sort of wobble – witnessed before among black hole jets, but not on such short timescales – happens in a way that requires an effect of Einstein’s general theory of relativity. It happens because, as the black hole spins, its powerful gravity is dragging along nearby space itself.

James Miller-Jones of Australia’s International Centre for Radio Astronomy Research led researchers in this study. He and his team employed the Very Long Baseline Array, a system of 10 radio telescopes located in various U.S. states and remotely operated from Socorro, New Mexico. They studied a black hole known as V404 Cygni, which isn’t a supermassive black hole lodged in the center of a galaxy, but just an ordinary nine-solar-mass black hole, located only 8,000 light-years from Earth in our Milky Way galaxy. NRAO said in a statement:

The black hole is drawing in material from a companion star with a mass about 70 percent that of our sun. As the material streams toward the black hole, it forms a rotating disk, called an accretion disk, surrounding the black hole.

In such systems, the disk becomes denser and hotter with decreasing distance from the black hole. Either the innermost portion of the disk or the black hole itself launches jets of material outward away from the disk. The astronomers said V404 Cygni’s jet material moves as fast as 60 percent of the speed of light.

These jets are precessing or wobbling so fast, the scientists said, that Einstein’s general theory of relativity is needed to explain them. According to Einstein, massive objects like black holes distort space and time. Further, when such a massive object is spinning, its gravitational influence pulls space and time around with it, an effect called frame-dragging. NRAO said:

In V404 Cygni, the black hole’s spin axis is misaligned from the plane of its orbit with the companion star. That causes the frame-dragging effect to warp the inner part of the disk, then pull the warped portion around with it. Since the jets originate from either the inner disk or the black hole, this changes the jet orientation, producing the wobbling observed with the Very Long Baseline Array.

This is the only mechanism we can think of that can explain the rapid precession we see in V404 Cygni. You can think of it like the wobble of a spinning top as it slows down, only in this case, the wobble is caused by Einstein’s general theory of relativity. 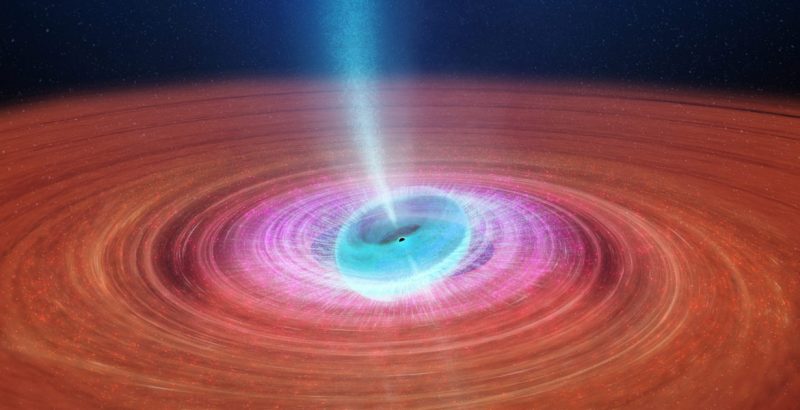 Artist’s concept of the inner accretion disk of black hole V404 Cygni. The entire accretion disk is about 10 million km (6.2 million miles) wide. The inner few thousand km are warped. That inner part also is puffed up by strong radiation pressure into a doughnut shape that wobbles, or precesses, like a rigid body. Image via NRAO.

Normally, astronomers will produce a single image of a system of this sort, using data collected over as much as several hours, like a long time-exposure photograph. The rapid direction changes of the jets of V404 Cygni meant these astronomers had to change their observation strategy. Team member Alex Tetarenko said:

These jets were changing so fast that in a four-hour image we saw just a blur.

To capture the jets’ rapid motion, the researchers made 103 individual images, each about 70 seconds long, then combined them to make a movie.

We were gobsmacked by what we saw in this system. It was completely unexpected. Finding this astronomical first has deepened our understanding of how black holes and galaxy formation can work. It tells us a little more about that big question: ‘How did we get here?’

He said the finding indicates that similar behavior might be found in other objects.

Read more about V404 Cygni, which came to astronomers’ attention via a 2015 outburst. 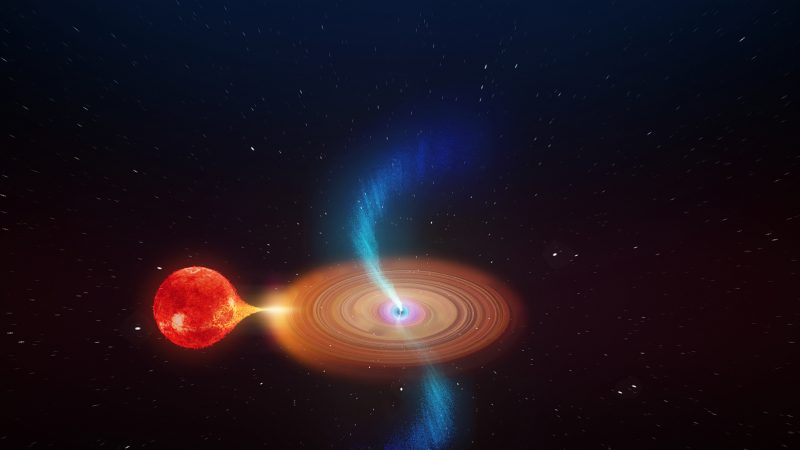 Artist’s concept of black hole V404 Cygni, on right. At left you see the normal star in orbit with the hole. Material from the star falls towards the black hole and spirals inwards in an accretion disk, with powerful jets being launched from the inner regions close to the black hole. Image via ICRAR/NRAO.

Bottom line: Jets of fast-moving material shot from the area surrounding a black hole are wobbling so fast that their change in direction can be seen in periods as short as minutes, and astronomers say it’s happening because the rotating black hole’s powerful gravitational pull is dragging nearby space itself along with it.

Source: Miller-Jones, Tetarenko, and Sivakoff, along with colleagues from around the world, are reporting their results in the scientific journal Nature.