Scientists at NASA’s Meteoroid Environment Office are deploying a network of smart cameras across the U.S. to learn about the 100 tons of natural and human-made space debris that enter Earth’s atmosphere daily. The cameras in the All-Sky Fireball Network will track the paths of fiery meteors, also known as falling stars or shooting stars – mostly tiny bits of space debris, some larger chunks of rock, which vaporize in the fall through Earth’s atmosphere. EarthSky spoke by email earlier today to William Cooke, head of NASA’s Meteoroid Environment Office. He said:

Our job is to monitor and define the meteoroid environment throughout the solar system. Right above our heads is a good place to start.

After tracking the meteors’ paths, the cameras’ special computer software will then use the data to determine the meteors’ original orbits in space. Each meteor sighting will trigger an email to a public All-Sky Fireball Network website as well as to Bill Cooke. 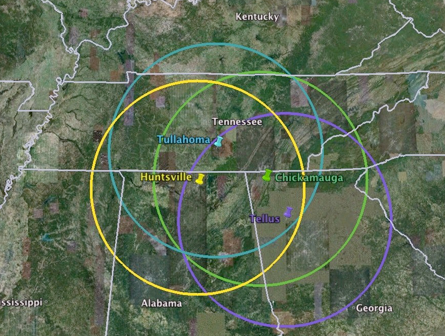 He said the team has deployed the first four of the network’s cameras – one at Marshall Space Flight Center, one in Chickamauga, Georgia, one in Tullahoma, Tennessee, and one in Cartersville, Georgia. He added:

We are getting the fifth camera and computer ready, and are looking for a site along the Tennessee/North Carolina border.

A NASA website says the ultimate goal for this project is to have 15 cameras in the meteor-tracking network deployed east of the Mississippi River, and that Cooke is looking for schools, science centers, and planetaria willing to host the cameras. Certain criteria must be met for a location to be considered as a camera site:

If that describes your location, here is Bill Cooke’s contact info: william.j.cooke (at) nasa.gov

My main goal behind these cameras is to use the data (trajectory, orbit, speed, directionality, and shower identification) to calibrate the meteor models NASA uses in vehicle design and operations, which have to do with spacecraft risk. A secondary, less important goal is to discriminate natural meteors from reentering space junk, and to provide information on meteorite falls, which are relatively rare events.

He listed many other science applications of the data the cameras will collect, including comparison of dynamical models of meteor showers to the observations, mass determinations of bright meteors, identification of new meteor showers or shower outbursts, and much more. The data are also applicable to studies of ablation, which is how heat dissipates through atmospheric friction as an object falls through the atmosphere. The term ablation applies especially to the atmospheric reentry of a spacecraft or missile, as its heat shield becomes hot and undergoes melting. That heat shield undergoes a process similar to that of a meteor – a chunk of natural space debris – as it falls through Earth’s atmosphere.

Cooke also said that the new camera network will give amateur and professional meteor hunters the information they need to calculate where a bright fireball might have landed on Earth. The cameras will determine the fireball’s trajectory through the atmosphere and help pinpoint the impact location. Cooke told EarthSky:

Lots of folks have found meteorites on the ground. Imagine the value if you could associate that meteorite with a particular meteor that has a measured orbit. Not only would you have the rock, but also some idea of where it came from! Kinda like a free sample return mission – with major limitations, of course.

Just for fun, check out this cool video, in which a bird stopped to rest on one of the cameras.

But – most importantly – next time you see a meteor or shooting star, think of Bill Cooke and other scientists at NASA’s Meteoroid Environment Office and their network of smart cameras. As you watched in awe as the meteor streaked across your sky, just think … these scientists might have captured it on film and determined just where in our solar system that bit of space debris originated.

Thank you! Your submission has been received!
Oops! Something went wrong while submitting the form.
END_OF_DOCUMENT_TOKEN_TO_BE_REPLACED