Betelgeuse is ‘fainting’ but (probably) not about to explode

The well-known bright star Betelgeuse – a red giant star, famous for its name and for the fact that it’ll explode someday – has become noticeably dimmer since late October. Here’s what astronomers think is happening. 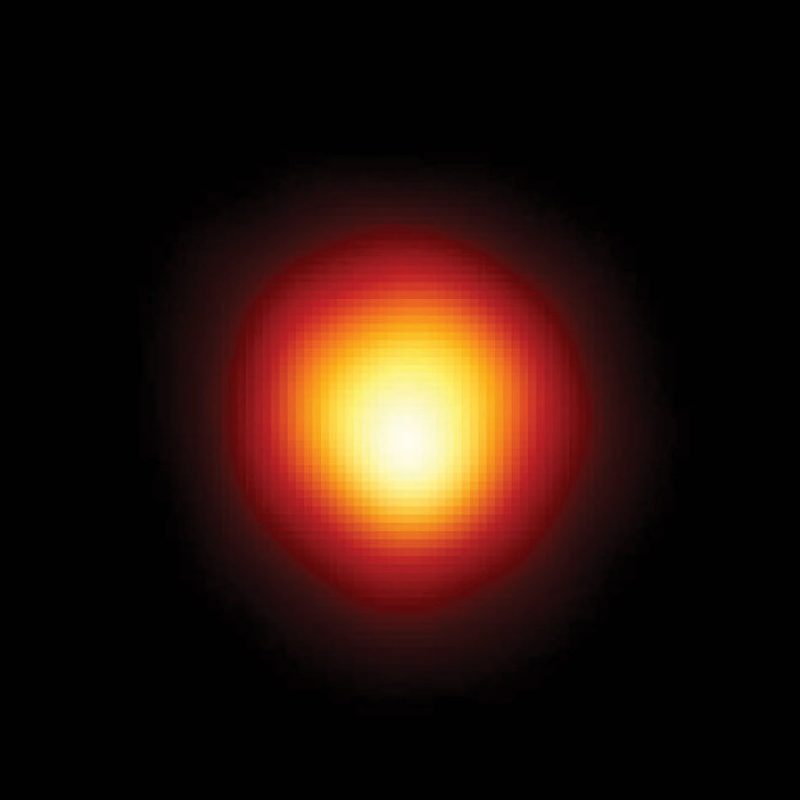 Betelgeuse imaged in ultraviolet light by the Hubble Space Telescope, and subsequently enhanced by NASA. The bright white spot is likely one of this star’s poles. Image via Andrea Dupree/ Ronald Gilliland/ NASA/ ESA/ Britannica.com.

The red supergiant star Betelgeuse – in the shoulder of the constellation Orion the Hunter – is one of the easiest-to-recognize stars in the night sky. It’s also one of the biggest stars we know, with a radius extending out to the distance of Mars’ from our sun, and possibly Jupiter! Plus, it’s famous for its name, featured in the movie Beetlejuice. And, as if those things weren’t enough, this star is also famous for the fact that it’ll someday explode and appear in our sky as a supernova, becoming visible in daytime and possibly outshining the moon at night.

In recent weeks, though, the chatter about Betelgeuse has been centered on something else entirely. Astronomers are excited about the fact that – since about October – this bright star has become noticeably dimmer. In the terminology of astronomers, the star is fainting.

What’s happening? Could it be a sign that Betelgeuse is about to explode as a supernova? Astronomers say probably not. Let’s consider the facts. 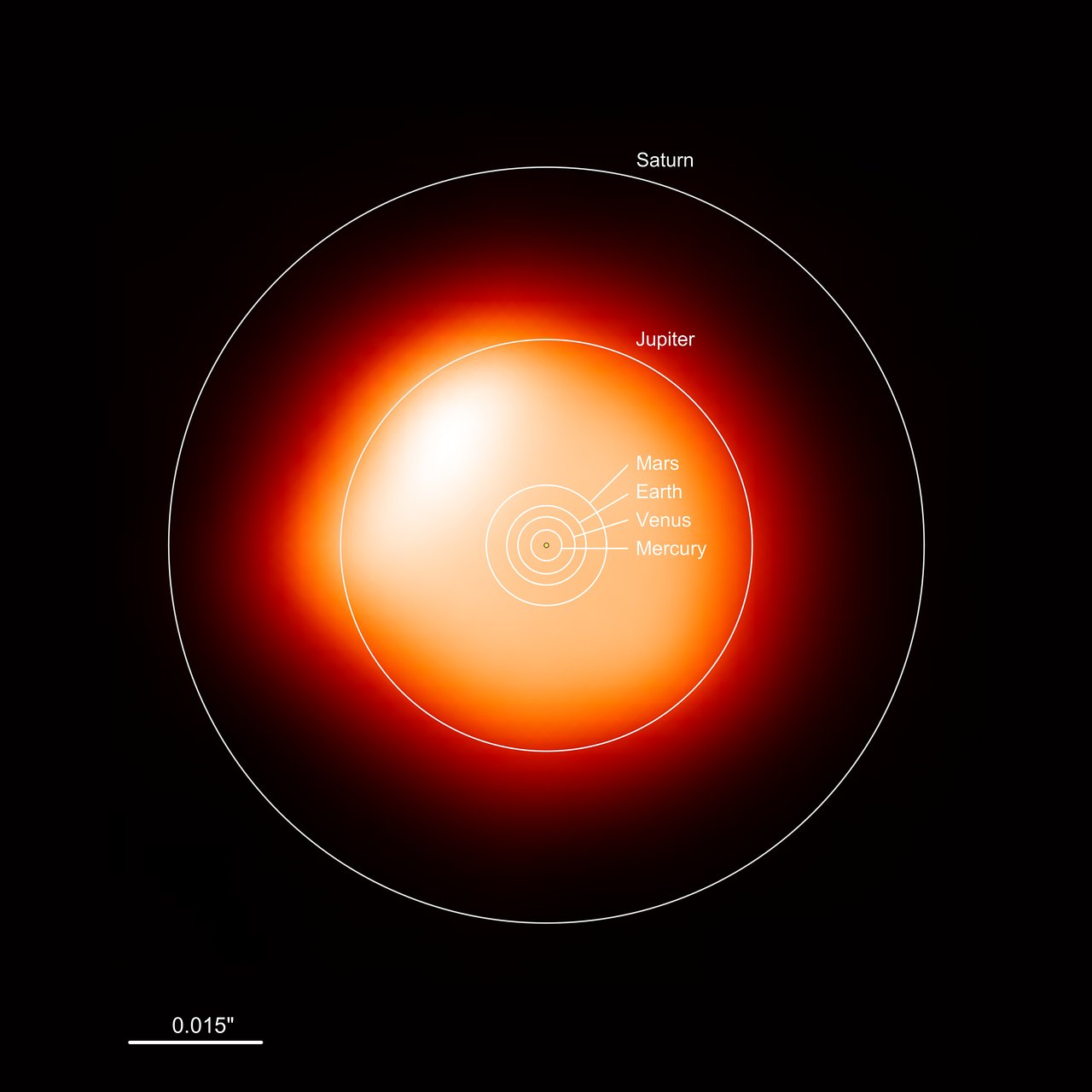 This image, made with the Atacama Large Millimeter/submillimeter Array (ALMA), shows the red supergiant Betelgeuse — one of the largest stars known. In the millimeter part of the spectrum, the star is around 1,400 times larger than our sun. The overlaid annotation shows how large the star is compared to our solar system. Betelgeuse would engulf all 4 terrestrial planets — Mercury, Venus, Earth and Mars — and even the gas giant Jupiter. Only Saturn and more distant planets would be beyond its surface. Image via ESO.

Betelgeuse is normally one of 2 very bright stars in the constellation Orion the Hunter. The other bright star is Rigel. Notice Betelgeuse and Rigel on either side of the short, straight row of three medium-bright stars. That row of stars represents Orion’s Belt. You can easily find this pattern in the sky – these 3 stars in a short-straight row – if you look. Look approximately along the path that the sun travels during the day.

I just took this shot of Orion and Taurus. Betelgeuse (left bright star) is noticeably dimmer than usual. It's at best as bright as Aldebaran (near the top) and dimmer than Rigel (right). No, this doesn't mean it's about to blow. It's a variable star and… https://t.co/dzDIdXk4v5 pic.twitter.com/oKWZJmgDmi

Betelgeuse is a well-known variable star, whose brightness ups and downs have been tracked for years by amateur and professional astronomers working with the American Association of Variable Star Observers (AAVSO). That’s why we know that there are multiple cycles for Betelgeuse’s rising and falling brightness. It’s conceivable that – when the minima of all the cycles come together – the star could look exceptionally faint, as it does now.

The variable red supergiant star is 11x more massive than the Sun, but has a radius 887x bigger, so its mean density is 63 million x lower.

But the fact remains Betelgeuse is now dimmer than it has been in the past.

And that’s what’s caused some speculation that Betelgeuse could be about to go supernova. Astronomers, meanwhile, are urging caution on that idea. They say it’s unlikely Betelgeuse will explode anytime in the next 100,000 years … and maybe not until a million years from now.

What are some other possibilities for Betelgeuse’s strange and dramatic dip in brightness in late 2019? Astronomers have also suggested that the change in brightness could be due to some sort of eruption of gas or dust, or changes in the star’s surface brightness.

What would happen if Betelgeuse were to explode? This star is “nearby” in relative terms, but it’s still some 430 light-years from Earth. Note also that distance determinations are tricky, especially for red supergiant stars that vary in brightness unpredictably, as Betelgeuse does. Distance estimates vary and are often revised, with some as high as 650 light-years for Betelgeuse.

No matter what its precise distance, Betelgeuse isn’t among our closest star neighbors. Yet it’s normally one of the brightest stars in Earth’s sky. The reason is that Betelgeuse is a supergiant star. It is intrinsically very brilliant.

Such brilliance comes at a price, however. Betelgeuse’s enormous energy requires that its fuel be expended quickly (relatively speaking), and in fact Betelgeuse is now near the end of its lifetime. Someday soon (astronomically speaking), it will run out of fuel, collapse under its own weight, and then rebound in a spectacular supernova explosion.

When this happens, Betelgeuse will brighten enormously for a few weeks or months, perhaps to be as bright as the full moon and visible in broad daylight.

When will it happen? Probably not in our lifetimes.

Astroblog: Betelgeuse fades more. This historic dimming of Betelgeuse continues,and it is now observably dimmer than Aldebaran? Will it fade more, go out and have a look.https://t.co/GcAI7EIyHA pic.twitter.com/GL2bBsvpxP

Bottom line: The bright red star Betelgeuse in the constellation Orion the Hunter has become noticeably fainter in recent months. Does that means it’s about to explode? Probably not, astronomers say.