Mars is a beaten and battered planet. Astronomers have been peering for centuries at the violent impact craters created by cosmic buckshot pounding its surface over billions of years. But just how beat up is it?

Really beat up, according to a University of Colorado Boulder research team that recently finished counting, outlining and cataloging a staggering 635,000 impact craters on Mars that are roughly a kilometer or more in diameter.

As the largest single database ever compiled of impacts on a planet or moon in our solar system, the new information will be of help in dating the ages of particular regions of Mars, said CU-Boulder postdoctoral researcher Stuart Robbins, who led the effort. The new crater atlas also should help researchers better understand the history of water volcanism on Mars through time, as well as the planet’s potential for past habitability by primitive life, he said.

A paper on the subject by Robbins and CU-Boulder faculty member Brian Hynek appeared in June 2012 in the Journal of Geophysical Research – Planets, a publication of the American Geophysical Union. A companion study by the two CU researchers was published in a recent issue of the same journal. The study was funded by NASA’s Mars Data Analysis Program. 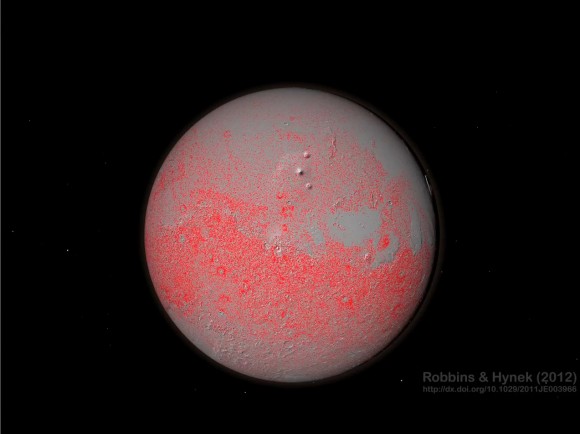 Hynek, a LASP research associate and assistant professor in the geological sciences department, said knowing more about the history and extent of Martian cratering has implications for better understanding the potential for past life on Mars. He said:

Many of the large impact craters generated hydrothermal systems that could have created unique, locally habitable environments that lasted for thousands or millions of years, assuming there was water in the planet’s crust at the time. But large impacts also have the ability to wipe out life forms, as evident from Earth’s dinosaur-killing Chicxulub impact 65 million years ago.

Having a better handle on the size and distribution of Martian impact craters also has implications for future, manned missions to the planet, said Hynek. NASA wants to know where the craters are and their particular features both from a safety and research standpoint. He said:

Craters act as a ‘poor man’s drill’ that provide new information about the subsurface of Mars.

Cataloging the cratering of Mars and the moon is helping scientists understand a time a few hundred million years after the inner solar system formed, including an event about 3.9 billion years ago known as the “Late Heavy Bombardment” in which asteroids as large as Kansas rained down on Earth. Hynek said:

Although Earth has lost most of its geologic record due to tectonic plate movements and erosion, understanding the impact crater history on the moon and Mars can help us reconstruct our early days.

Bottom line: A University of Colorado Boulder research team that recently finished counting, outlining and cataloging a staggering 635,000 impact craters on Mars that are roughly a kilometer or more in diameter. Their paper appeared in June 2012 in the Journal of Geophysical Research – Planets.

Read more from University of Colorado

Thank you! Your submission has been received!
Oops! Something went wrong while submitting the form.
END_OF_DOCUMENT_TOKEN_TO_BE_REPLACED

The secrets of noctilucent clouds