Here’s the most detailed image yet of the Medusa Nebula. The image foreshadows the final fate of our sun, which will eventually become an object of this kind. 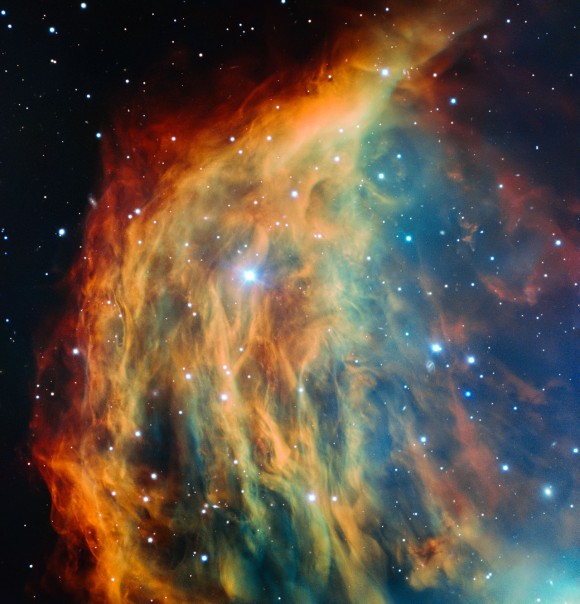 View larger | ESO’s Very Large Telescope in Chile has captured the most detailed image ever taken of the Medusa Nebula (also known Abell 21 and Sharpless 2-274).

The European Southern Observatory (ESO) released this awesome new image earlier this month (May 20, 2015). It’s the most detailed image ever of Medusa Nebula (also known Abell 21 and Sharpless 2-274), captured by ESO’s Very Large Telescope in Chile. This object is located in the direction of our constellation of Gemini the Twins. It lies at a distance of about 1,500 light-years from Earth. As viewed close up in space, the nebula spans approximately four light-years, but, despite its size, its great distance makes it extremely dim and hard to observe. The processes that created the object in this image foreshadow the final fate of our sun, which will eventually also become an object of this kind.

At the heart of the Medusa Nebula is an old star. As that star made its final transition into stellar old age, it shed its outer layers into space, forming this colorful cloud. This object is what’s called a planetary nebula by astronomers, so named because early astronomers, whose telescopes weren’t very powerful, saw these objects only as featureless round balls in space.

The Medusa Nebula, in particular, is named after a creature from Greek mythology — the Gorgon Medusa. The mythological Medusa was a hideous creature with snakes in place of hair. You might see a snake-y quality in the serpentine filaments of glowing gas in this nebula. The red glow from hydrogen and the fainter green emission from oxygen gas extends well beyond this frame, forming a crescent shape in the sky. The ejection of mass from stars at this stage of their evolution is often intermittent, which can result in fascinating structures within planetary nebulae. 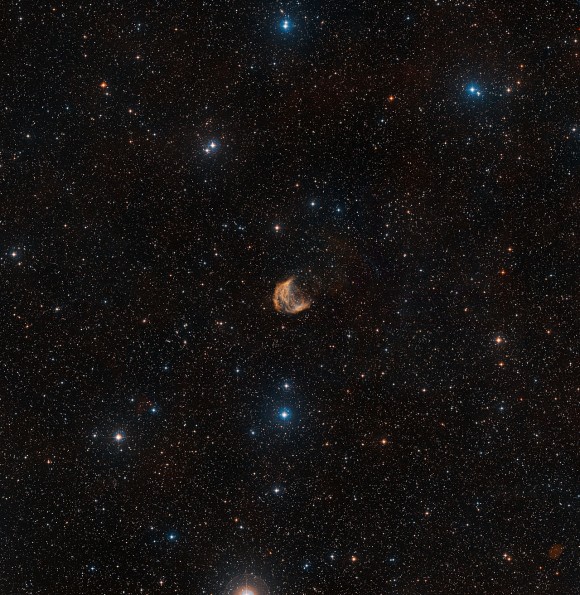 This wide-field view shows the sky around the large but faint planetary nebula known as the Medusa Nebula. The full extent of the object can be seen, as well as many faint stars and, far beyond them, numerous distant galaxies. Image credit: ESO

For tens of thousands of years the stellar cores of planetary nebulae are surrounded by these spectacularly colorful clouds of gas. Over a further few thousand years the gas slowly disperses into its surroundings. This is the last phase in the transformation of stars like the sun before ending their active lives as white dwarfs. The planetary nebula stage in the life of a star is a tiny fraction of its total life span.

Harsh ultraviolet radiation from the very hot star at the core of the nebula causes atoms in the outward-moving gas to lose their electrons, leaving behind ionised gas. The characteristic colors of this glowing gas can be used to identify objects. In particular, the presence of the green glow from doubly ionised oxygen ([O III]) is used as a tool for spotting planetary nebulae. By applying appropriate filters, astronomers can isolate the radiation from the glowing gas and make the dim nebulae appear more pronounced against a darker background.

When the green [O III] emission from nebulae was first observed, astronomers thought they had discovered a new element that they dubbed nebulium. They later realized that it was simply a rare wavelength of radiation from an ionized form of the familiar element oxygen.

The nebula is also referred to as Abell 21 (more formally PN A66 21), after the American astronomer George O. Abell, who discovered this object in 1955. For some time scientists debated whether the cloud could be the remnant of a supernova explosion. In the 1970s, however, researchers were able to measure the movement and other properties of the material in the cloud and clearly identify it as a planetary nebula. 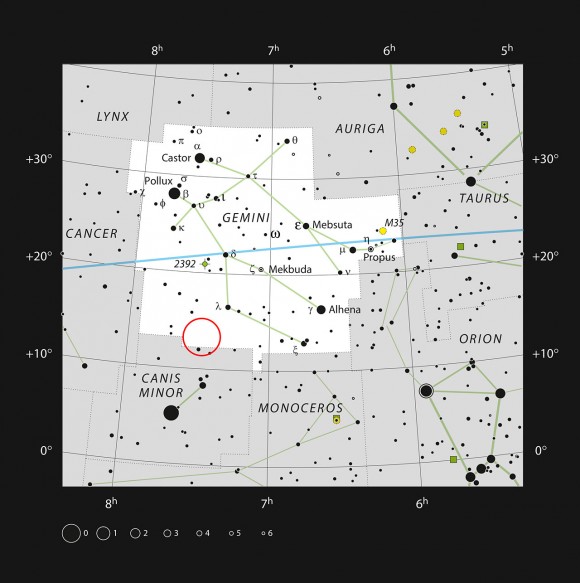 This chart shows the famous zodiacal constellation of Gemini (The Twins). All the stars that can be seen easily with the naked eye on a dark clear night are shown. The position of the Medusa Nebula is indicated. This large and beautiful planetary nebula is unfortunately too faint to be seen in small telescopes and only reveals its structure in photographs. Image credit: ESO, IAU and Sky & Telescope

Bottom line: ESO’s Very Large Telescope in Chile has captured the most detailed image ever taken of the Medusa Nebula, released on May 20, 2015.