The hole is gigantic and facing Earth’s way. Possible aurora sightings at the latitude of the northern U.S. – for example, in Michigan or Maine – on January 4 and 5. 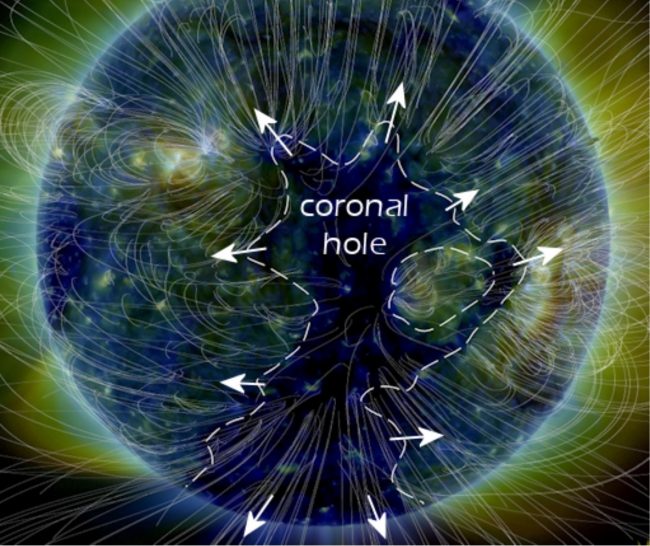 Spaceweather.com said, “The stream of wind emerging from this coronal hole recently blew past NASA’s STEREO-A spacecraft with peak speeds exceeding 700 km/sec [434 miles/sec]. Similar high speeds are likely when the stream reaches Earth on January 4 and 5.”

Have you heard about the huge coronal hole in the sun that is facing Earth’s way? According to spaceweather.com, it means the chances of geomagnetic storms (think of them as disturbances in the force!) and thus auroras for those at high latitudes are high this week. Should you be worried? No. The Space Weather Prediction Center calls this a “minor” storm. Astronomer Tony Phillips, who writes Spaceweather.com, wrote on January 3, 2017:

NOAA forecasters have boosted the odds of polar geomagnetic storms on January 4 and 5 to 65% as a stream of solar wind approaches Earth. The hot wind is flowing from a large hole in the sun’s atmosphere.

The sun is mostly covered in lots of ‘closed’ magnetic fields … In coronal holes, the fields are ‘open’ out to space.

Coronal holes are regions where the sun’s magnetic field peels back and allows solar wind to escape … Residents of the Arctic should expect G1-class geomagnetic storms and bright auroras in the nights ahead.

Okay so … will you see auroras? That depends on where you live. At this writing, the Space Weather Prediction Center is calling for auroras at 60 degrees N. and further northward, with possible aurora sightings at the latitude of the northern United States – for example, in Michigan or Maine – on the nights of January 4 and 5, 2017. Be sure to check for updates! 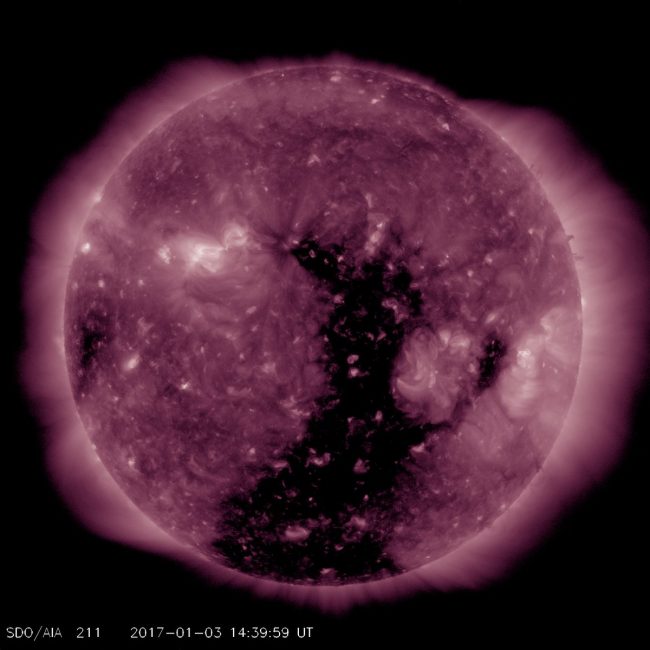 Huge coronal hole on the Earth-facing side of the sun, January 3, 2017. Via Karl Battams (@sungrazercomets on Twitter).

Bottom line: A huge Earth-facing coronal hole has caused an increase chance of geomagnetic storms on January 3 and 4, 2017. Aurora alert for those at high latitudes!