Astronomers are arguing over a brief and unusual flash in the night sky from earlier this year. The call it the Cow. One group argues it was a monster black hole shredding a passing star. The other argues it might have been a black hole being born.

When astronomers met in Seattle last week, one riveting topic was the brief and unusual flash in the night sky – spotted from around the globe – on June 16, 2018. Over three days, something produced a sudden explosion of light at least 10 times brighter than a typical supernova, or exploding star. The light flared, then faded from view over several months, but not before this mystery event became one of the most intensely studied in history.

This unusual event occurred inside or near a star-forming galaxy known as CGCG 137-068, located 200 million light-years away, in the direction of our constellation Hercules. The outburst is officially labeled AT2018cow, and nicknamed the Cow for the official designation’s randomly produced last three letters. The event was unlike any seen before. Astronomer Ryan Chornock at Ohio University, who helped study it, said in a statement:

We knew right away that this source went from inactive to peak luminosity within just a few days. That was enough to get everybody excited, because it was so unusual and, by astronomical standards, it was very close by.

Researchers have settled on two possible interpretations of this event, which they shared in Seattle at a panel discussion on January 10, 2019. The two groups with different views have had papers accepted for publication, providing two different explanations for the Cow’s origins. One paper suggests the Cow is a monster black hole shredding a passing star. The other hypothesizes the literal birth of a black hole or a neutron star. If the second scenario is correct, the outburst was indeed a supernova.

Which scenario is true? Let’s take a look at them both. 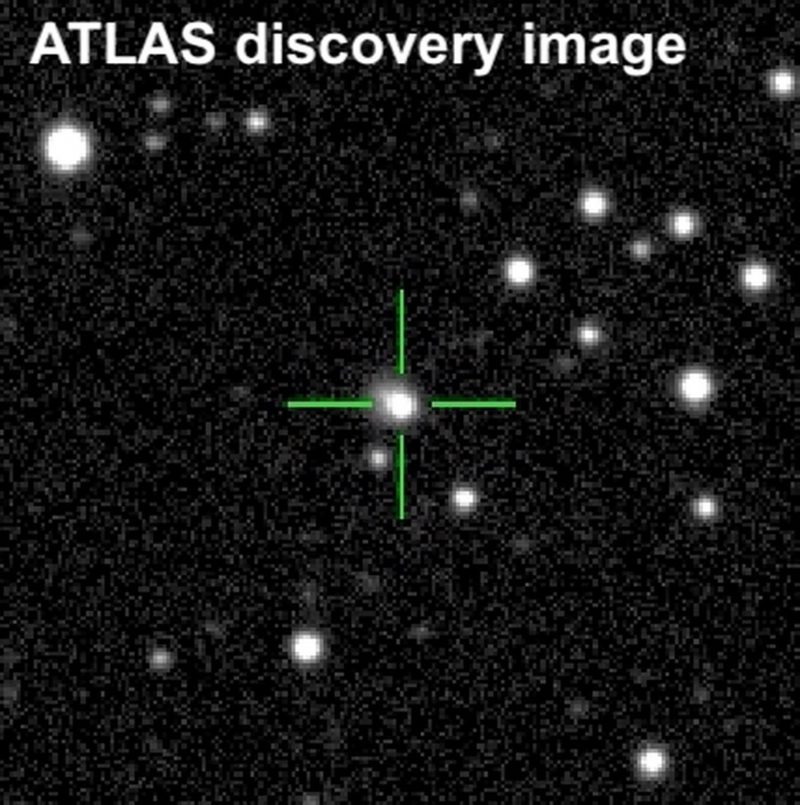 Discovery image of AT2018cow – nicknamed the Cow by astronomers – acquired by the ATLAS telescopes. Image via Stephen Smartt/ATLAS.

The video at the top of this post shows the first scenario: a black hole shredding an evolved star known as a white dwarf. Astronomers call this a tidal disruption event because it’s an effect of one body’s gravity upon another, much as our moon’s gravity pulls on our watery Earth to cause the tides. A statement from NASA explained that – in the vicinity of a black hole – the tidal pull would be similar:

… but more powerful on an approaching star, ultimately breaking it apart into a stream of gas. The tail of the gas stream is flung out of the system, but the leading edge swings back around the black hole, collides with itself and creates an elliptical cloud of material.

This research team used data spanning from infrared radiation to high-energy gamma rays, from NASA’s orbiting Swift Observatory and other observatories. Astronomer Amy Lien of NASA’s Goddard Space Flight Center in Greenbelt, Maryland, was part of the team favoring this scenario. She said:

We’ve never seen anything exactly like the Cow, which is very exciting. We think a tidal disruption created the quick, really unusual burst of light at the beginning of the event and best explains Swift’s multiwavelength observations as it faded over the next few months.

These astronomers calculated that the black hole’s mass ranges from 100,000 to 1 million times the sun’s, almost as large as the central black hole of its host galaxy. Paul Kuin at University College London, who led the research, explained why such a large black hole is needed for this scenario:

The Cow produced a large cloud of debris in a very short time. Shredding a bigger star to produce a cloud like this would take a bigger black hole, result in a slower brightness increase and take longer for the debris to be consumed.

These astronomers pointed out that it’s unusual to see black holes of this scale outside a galactic center, but, they said:

… it’s possible the Cow occurred in a nearby satellite galaxy or a globular star cluster whose older stellar populations could have a higher proportion of white dwarfs than average galaxies.

Or a Black Hole or Neutron Star Being Born?

The second team of scientists was able to gather data on the Cow over an even broader range of wavelengths, spanning from radio waves to gamma rays. This team now believes that a supernova could be the source of the Cow and that the event heralds astronomers’ first direct observation of the birth of a black hole or neutron star. Astronomer Raffaella Margutti at Northwestern University – lead author of the paper describing this scenario – commented:

We know from theory that black holes and neutron stars form when a star dies, but we’ve never seen them right after they are born. Never.

The team proposes that the bright optical and ultraviolet flash from the Cow signaled a supernova and that the X-ray emissions that followed shortly after the outburst arose from gas radiating energy as it fell onto a compact object.

Astronomer Daniel Perley at Liverpool John Moores University in England also studied the Cow, and also favors the supernova hypothesis. He commented in yet another statement:

The properties of the Cow strain nearly all models we have tried to devise to explain it.

Whatever it is, it must involve some form of energetic and very fast explosion interacting with an extremely dense shell of material very close to the explosion progenitor.

Thus now, half a year after astronomers first spied the Cow, they’re still debating what it is and how it really happened. 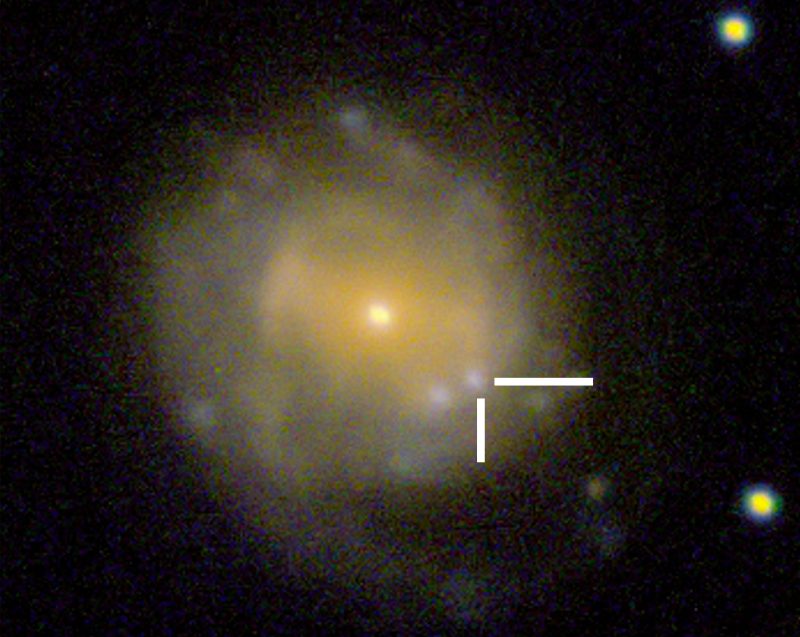 What was it? AT2018cow – aka the Cow – erupted in or near a galaxy known as CGCG 137-068, which is located about 200 million light-years away in the direction of our constellation Hercules. Image via Sloan Digital Sky Survey.

Bottom line: Astronomers are arguing over a brief and unusual flash in the night sky from earlier this year. The call it the Cow. One group argues it was a monster black hole shredding a passing star. The other argues it might have been a black hole being born.

Source: An embedded X-ray source shines through the aspherical AT2018cow: revealing the inner workings of the most luminous fast-evolving optical transients

Source: The Fast, Luminous Ultraviolet Transient AT2018cow: Extreme Supernova, or Disruption of a Star by an Intermediate-Mass Black Hole?