Astronomers find the brightest quasar yet

It shines with a brightness equivalent to 600 trillion suns. “We don’t expect to find many quasars brighter than that in the whole observable universe,” said the astronomers. 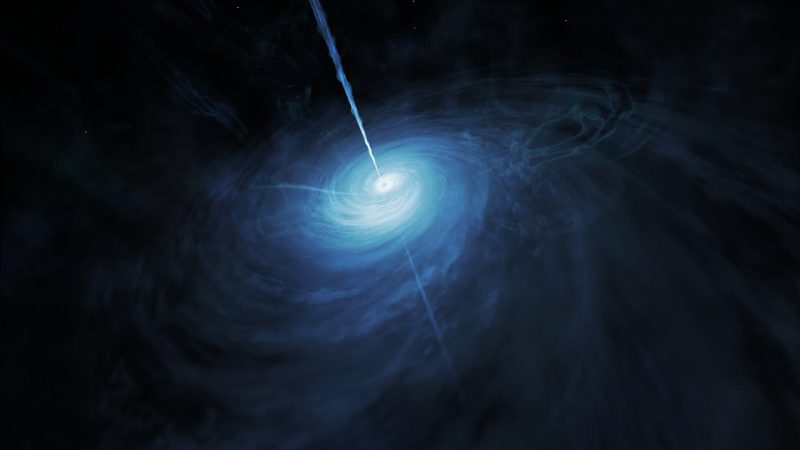 Artist’s concept showing how J043947.08+163415.7 – a very distant quasar powered by a supermassive black hole – might look close up. Image via ESA/Hubble/NASA/M. Kornmesser.

Researchers announced this week (January 9, 2019) at the 233rd meeting of the American Astronomical Society in Seattle, Washington, that they’ve discovered the brightest quasar yet known, detected from the period when the universe was just beginning to make luminous objects, such as stars and galaxies. Quasars are thought to be the bright cores of early active galaxies, powered by central, supermassive black holes. The extreme brightness of quasars – so bright that we can see them across a distance corresponding to most of the history of the universe – is believed to come from hot material falling into black holes. The newly discovered super-bright quasar is catalogued as J043947.08+163415.7. It shines with light equivalent to 600 trillion suns, from a distance 12.8 billion light-years from Earth.

It now holds the record for being the brightest quasar in the early universe, and, astronomers say, it might hold this record for some years to come. Astronomer Xiaohui Fan at the University of Arizona’s Steward Observatory led the team that made the discovery. He commented:

We don’t expect to find many quasars brighter than that in the whole observable universe.

This bright and remote quasar is rare. Astronomers say they searched for 20 years for such a distant quasar before finding this one. They found it via a lucky alignment; a dim galaxy is located between us and the quasar. The light of the intervening galaxy bends the light from the quasar and makes the quasar appear three times as large and 50 times as bright as it would be without this gravitational lensing effect. 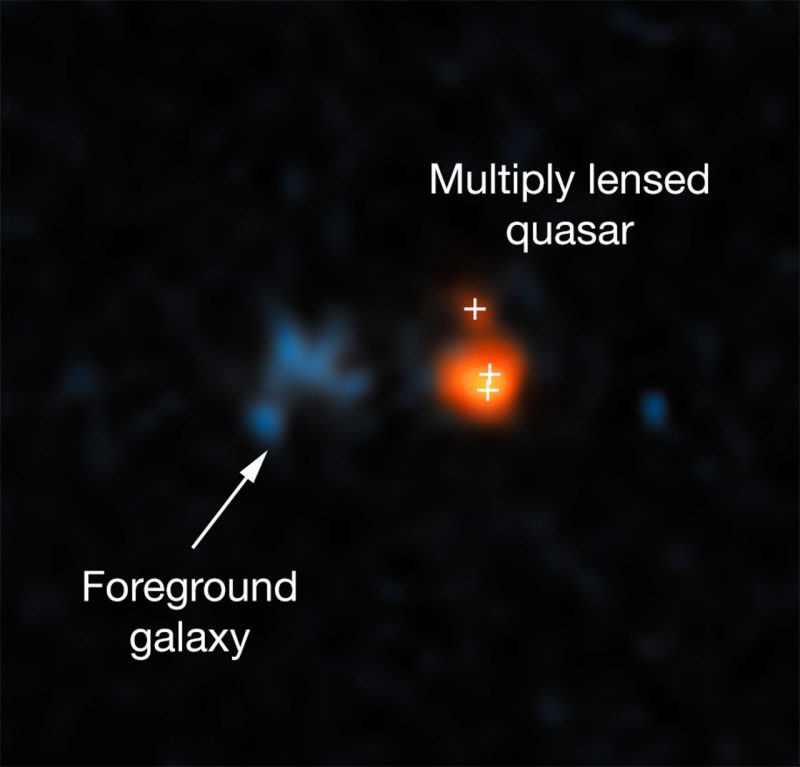 Distant quasar J043947.08+163415.7 as it was observed with the Hubble Space Telescope. The quasar is one of the brightest objects in the early universe. However, due to its distance, it only became visible as its image was made brighter and larger by the magnifying effect of a dim galaxy located between us and the quasar. This system – consisting of the quasar and intervening galaxy – is so compact that Hubble is the only optical telescope able to resolve it. Image via NASA/ESA/X. Fan (University of Arizona)/SpaceTelescope.org.

Astronomer Fabio Pacucci at Yale – who co-led the discovery, plus led an analysis of its theoretical implications – commented:

For decades we thought that lensed quasars should be very common in the faraway universe, but this is the first source of this kind that we have found.

Pacucci used the term phantom quasar to describe this object, and said J043947.08+163415.7 should provide insight on how to find more such objects. He said:

These sources are difficult to detect, as our observations are misled by the presence of the lensing object, in between the faraway quasar and the Earth.

If they do exist, ‘phantom quasars’ could revolutionize our idea of the most ancient history of the universe.

Pacucci and Fan worked with an international team of astronomers to make the discovery, making use of multiple Hawaii-based observatories in their work, including Gemini Observatory, the James Clerk Maxwell Telescope, United Kingdom Infra-Red Telescope (UKIRT), the W.M. Keck Observatory, and the Panoramic Survey Telescope and Rapid Response System (Pan-STARRS1). They also used the Hubble Space Telescope, which issued its own statement about the finding, saying:

Quasars similar to J043947.08+163415.7 existed during the period of reionization of the young universe, when radiation from young galaxies and quasars reheated the obscuring hydrogen that had cooled off just 400,000 years after the Big Bang; the universe reverted from being neutral to once again being an ionized plasma. However, it is still not known for certain which objects provided the reionizing photons. Energetic objects such as this newly discovered quasar could help to solve this mystery.

For that reason the team is gathering as much data on J043947.08+163415.7 as possible. Currently they are analysing a detailed 20-hour spectrum from the European Southern Observatory’s Very Large Telescope, which will allow them to identify the chemical composition and temperatures of intergalactic gas in the early universe. The team is also using the Atacama Large Millimeter/submillimeter Array, and hopes to also observe the quasar with the upcoming NASA/ESA/CSA James Webb Space Telescope.

With these telescopes they will be able to look in the vicinity of the supermassive black hole and directly measure the influence of its gravity on the surrounding gas and star formation.

Bottom line: Astronomers have discovered a quasar – labeled J043947.08+163415.7 – that they say is the brightest one yet. The quasar shines with light equivalent to 600 trillion suns, across a distance of 12.8 billion light-years.