Because it sucks in so much gas, this black hole appears ultra-luminous. If it sat at the center of our Milky Way, we’d see it shining 10 times more brightly than a full moon. 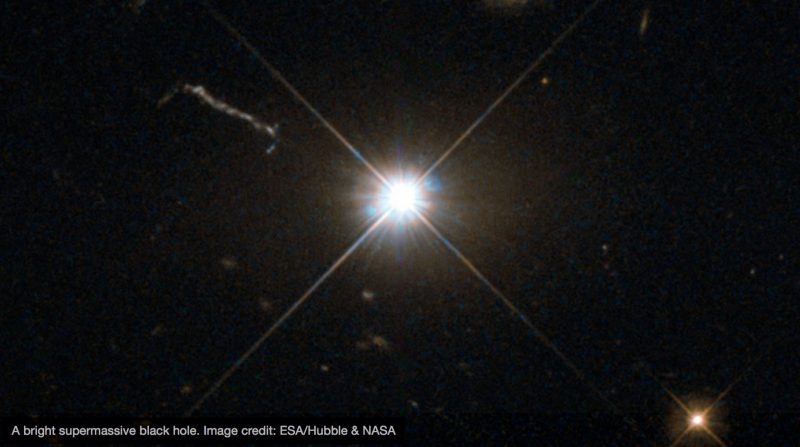 Astronomers announced on May 15, 2018, that they’ve identified the fastest-growing black hole yet known in the universe. They describe it as a monster that devours a mass equivalent to our sun every two days. They spied this black hole – which is also known as an ultra-luminous quasar – while looking back more than 12 billion years to what are called the cosmic dark ages of our universe.

At that time, this supermassive black hole was estimated to be the size of about 20 billion suns. It had a 1 percent growth rate every million years.

Christian Wolf of Australian National University (ANU) is lead author of the study of this object, which is labeled by the quasar name QSO SMSS~J215728.21-360215.1. Wolf said in a statement:

This black hole is growing so rapidly that it’s shining thousands of times more brightly than an entire galaxy, due to all of the gases it sucks in daily that cause lots of friction and heat.

If we had this monster sitting at the center of our Milky Way galaxy, it would appear 10 times brighter than a full moon. It would appear as an incredibly bright pin-point star that would almost wash out all of the stars in the sky.

The study is due to appear in the peer-reviewed journal Publications of the Astronomical Society of Australia (PASA). 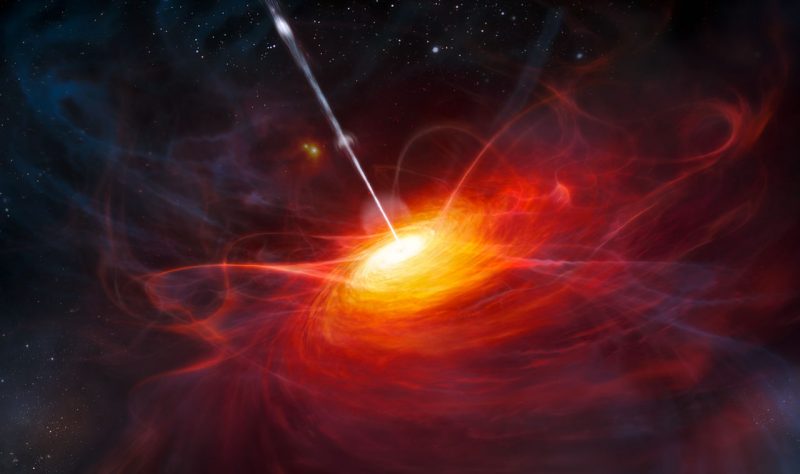 Artist’s rendering of the accretion disk of a supermassive black hole, located within a very distant quasar. Imagine this accretion disk much, much brighter, due to the great quantities of gas being sucked into the hole, and you’ll have the idea of the ultra-luminous system QSO SMSS~J215728.21-360215.1. Image via ESO/M. Kornmesse.

Wolf said the energy emitted from this newly-discovered supermassive black hole, also known as a quasar, was mostly ultraviolet light but also X-rays. He said:

Again, if this monster was at the center of the Milky Way it would likely make life on Earth impossible with the huge amounts of X-rays emanating from it.

These astronomers used the SkyMapper telescope at Siding Spring Observatory in Australia to detect the light of this object in the near-infrared. They needed to look in that realm of the electromagnetic spectrum because the light waves had red-shifted over the billions of light-years to Earth. Wolf said:

As the universe expands, space expands and that stretches the light waves and changes their color.

Wolf said that large and rapidly-growing black holes are exceedingly rare. He said he and his team have been searching for them with the SkyMapper telescope for several months now.

The European Space Agency’s Gaia satellite – an astrometry satellite, which measures tiny motions of celestial objects – also helped find this supermassive black hole. Wolf said the Gaia satellite confirmed the object that they had found was sitting still, meaning that it was far away. Thus it was a candidate to be a very large quasar.

The discovery of the new supermassive black hole was confirmed using the spectrograph on the ANU 2.3 meter telescope to split colors into spectral lines. Wolf said:

We don’t know how this one grew so large, so quickly in the early days of the universe. The hunt is on to find even faster-growing black holes.

Wolf also said that, as these kinds of black holes shine, they can be used as beacons to see and study the formation of elements in the early galaxies of the universe. 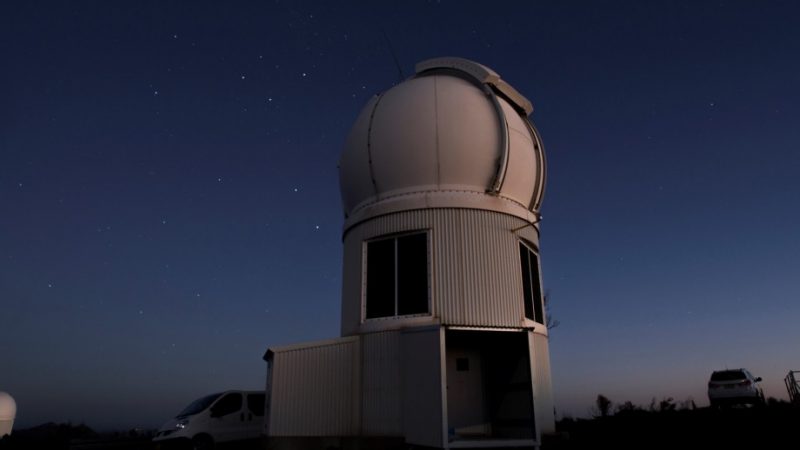 Astronomers used the SkyMapper telescope at Siding Spring Observatory in Australia in the search for large and rapidly-growing black holes. The Gaia satellite helped confirm its great distance from Earth. Image via ANU.

Bottom line: Astronomers have discovered the fastest-growing black hole yet.

Source: Discovery of the most ultra-luminous QSO using Gaia, SkyMapper and WISE