Here are images, videos and info from the sweep past Earth of this 3-mile-wide (5-km-wide) space rock.

I hope I’m not the only one who entirely missed out on this week’s close pass of asteroid 4179 Toutatis and that you’ll enjoy these images, videos and info, even though we’re late in posting them. Sorry, y’all! The dazzling Geminid meteor shower – and some other things – have us mesmerized this week. Toutatis is a very interesting asteroid. It passes Earth’s orbit every four years. It’s big – about 3 miles or 5 kilometers across – half as big as the asteroid thought to have wiped out the dinosaurs, astronomers say. But there’s no (immediate) danger from Toutatis to Earth. Astronomers have tracked its orbit hundreds of years into the future and see no sign of any impending collision. So there’s nothing to fear from Toutatis. Instead, there’s lots to enjoy. This space mountain passed Earth on the night of December 11-12, 2012. The images below are just a sampling of what earthly astronomers acquired during the passage.

First, here’s an animation of Asteroid Toutatis from Slooh.com, compiled from Slooh’s live show on December 11, 2012. If you haven’t had time to check out Slooh, by the way, you should. They do some very cool things, including capture this video.

Why is Toutatis moving so quickly in front of the star background in that video? It’s because it came so relatively close to Earth during its December 11-12 passage. Toutatis made its closest pass to Earth on December 12, 2012 at 06:40 UTC. According to clocks in the central U.S., it was 40 minutes after midnight during the night of December 11-12. How close did it come? Well, not all that close in an absolute sense. Toutatis passed within about 18 lunar distances of the Earth – that’s about 4 million miles away (7 million kilometers) or 18 times farther away than Earth’s moon. Still, for an asteroid, it’s pretty close – within the outer limit to be considered a Potentially Hazardous Asteroid or PHA by space scientists. More about that below.

Here’s another video showing how fast Toutatis appeared to be moving in front of the stars, at its December 11-12 passage. Adam Block on Vimeo captured it.

The 2012 passage of asteroid Toutatis was also close enough to allow radar imaging by NASA’s Goldstone Observatory, part of NASA’s Deep Space Network. That awesome image is below.

Goldstone radar images of Toutatis from December 11, 2012 via NASA

Asteroid Toutatis was not a surprise to astronomers. It’s known, which you might have guessed because it has a proper name, instead of just a numerical designation. Astronomers first sighted and cataloged Toutatis in 1934, giving it the designation 1934 CT, but they quickly lost sight of it again. The asteroid remained lost for several decades – all the while unseen as it made its every-four-year sweep past Earth’s orbit – until it was rediscovered in 1989. Afterwards, when its orbit was pinned down enough that there was no danger of losing sight of it again, the International Astronomical Union officially named this object after the Celtic god Toutatis (Teutates).

Now Toutatis is known as one of the largest of the Potentially Hazardous Asteroids (PHAs). By definition, PHAs come within at least 4.6 million miles (7.5 million kilometers) of Earth. That’s approximately 19.5 lunar distances, or about the distance of Toutatis at this 2012 passage. Plus, to be considered potentially hazardous, these objects must have a diameter of at least 330 to 500 feet (100 to 150 meters). That’s big enough to cause regional devastation to human settlements unprecedented in human history in the case of a land impact, or a major tsunami in the case of an ocean impact.

Of course, Toutatis is much bigger than this minimum size required for PHAs. We’re lucky it’s not on any sort of collision course with Earth for hundreds of years into the future, if not much much longer. In fact, it’s very likely this object has been passing Earth’s orbit every four years for billions of years. It’s likely it’ll continue to do so, harmlessly, for billions of years more. 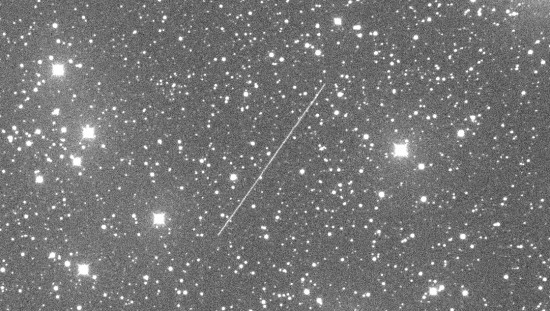 By the way, another asteroid also passed close this week – designated 2012 XE54. This little space rock is estimated to be only between 50 and 165 feet across (15-50 meters). Although it would cause some damage if it struck earthly land, the damage would be local – not regional – and thus 2012 XE54 isn’t big enough to be categorized as a PHA. 2012 XE54 passed Earth on the same day as Toutatis, December 11, but earlier in the day. 2012 XE54 had been found one day before its closest approach to Earth. Traveling at a speed of 13 kilometers per second, it passed only only 139,500 miles (224,503 kilometers) away, or slightly more than half the moon’s distance (0.6 lunar distances).

When will the large asteroid 4179 Toutatis pass as close to Earth again as it did on December 11-12? According to Universe Today:

Next time Toutatis will approach at least this close to Earth is in November of 2069 when the asteroid will fly by at a distance of only 0.0198 AU (7.7 lunar distances).

Bottom line: Asteroid 4179 Toutatis passed within 18 lunar distances – about 4 million miles – on the night of December 11-12, 2012. Here are some images and videos from that passage.