Astronomers discovered the asteroid yesterday. It might enter Earth’s shadow in the next few hours and pass slightly more than half the moon’s distance a few hours after that.

A small asteroid – discovered only yesterday – will sweep closely past Earth tonight and possibly undergo an eclipse by Earth’s shadow. If so, that would be a rare event, and something many amateur astronomers will want to see. The asteroid, and the eclipse, will not be visible to the eye. The asteroid has been designated 2012 XE54. Pasquale Tricarico of the Institute of Planetology is saying the asteroid will pass through the Earth’s shadow, creating an asteroid eclipse, an event whose mechanics are much like an eclipse of the full moon by Earth’s shadow.

This animation shows the sun and the Earth as observed from the asteroid 2012 XE54. You can see that, if this eclipse occurs, the asteroid will be in Earth’s shadow. Animation via Pasquale Tricarico. 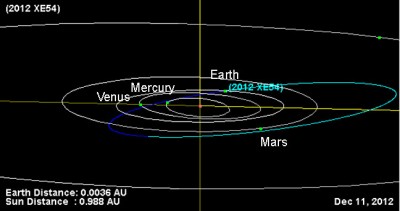 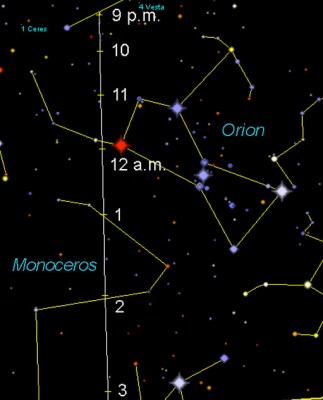 The asteroid will be much to faint to see with the eye. It will cruise through the constellations Orion and Monoceros tonight (December 10-11, 2012). This chart was created by AstroBob with Chris Marriott’s SkyMap software. Positions are shown each hour starting at 9 p.m. CST.

If the eclipse occurs as Dr. Tricarico suggests, 2012 XE54 will enter Earth’s shadow at 7:22 CST on December 10 (01:22 UTC on December 11) and leave Earth’s shadow at 8:00 p.m. CST on December 10 (02:00 UTC on December 11). Will it be like a lunar eclipse, during which the moon passes through Earth’s shadow? No. At a lunar eclipse, observers on Earth see a dark bite taken from one edge of the moon, which slowly crawls across the moon’s face. An asteroid eclipse can’t be like that, because asteroids appear starlike from Earth – like points of light, even through telescopes. Those watching an asteroid eclipse see the asteroid’s light suddenly dim.

The Observatory of the Hungarian University of Szeged and the Japanese observatory Moriyama confirmed the existence of 2012 XE54 yesterday.