It’s a spectacular achievement to rendezvous with an asteroid as it’s whizzing around the sun. It’s even more amazing to collect a sample. That’s what the Hayabusa2 spacecraft did in February 2019. Here’s what researchers learned. 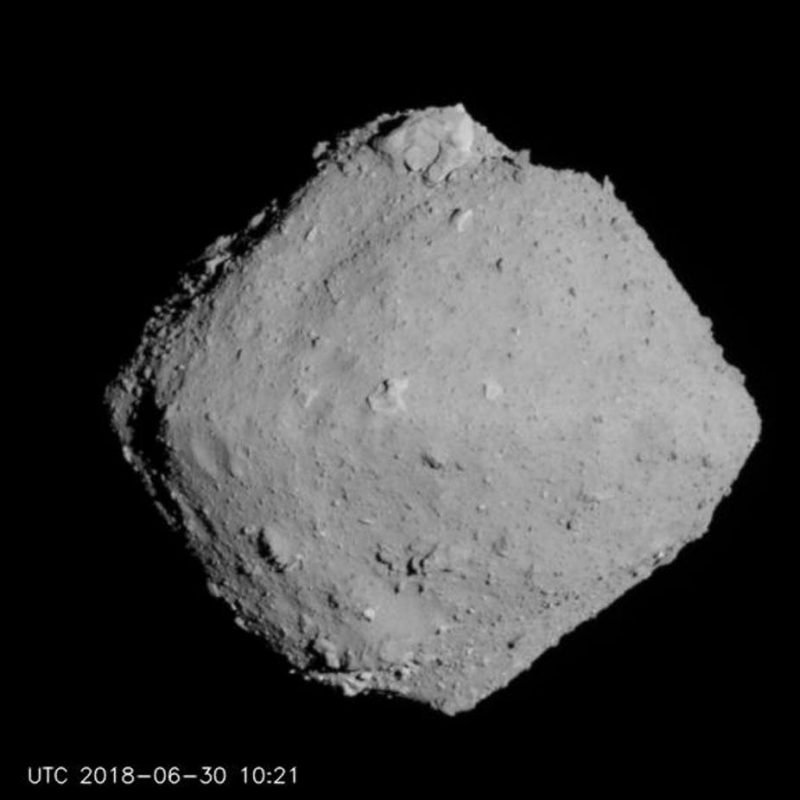 More precisely, the Hayabusa2 spacecraft, built and operated by the Japan Aerospace Exploration Agency, or JAXA, fired a 5-gram metal projectile into the surface of the near-Earth asteroid Ryugu, a spinning-top-shaped body about 1 kilometer (.6 mi) across and some 210 million miles (350 million km) from Earth. This projectile disrupted the surface of the asteroid, allowing Hayabusa2 to capture some of the lofted material and tuck it safely away on board. Having departed from Ryugu in November 2019, Hayabusa2 is expected to fly past Earth in late 2020 and release its samples in a reentry capsule for detailed analyses in labs across the world.

In a new paper published in Science, the Hayabusa2 team reports on their observations of the sampling process itself, and what measurements of Ryugu’s surface generally can tell us of its evolution. These observations paint a remarkable story of a cosmic traveler that traveled from the main asteroid belt, taking a short-lived excursion near the sun, before ultimately settling into an orbit in our neighborhood as a near-Earth asteroid.

I’m a planetary scientist, and I’m fascinated by why planetary bodies look the way they do. By understanding better how and why Ryugu gained its current appearance, we’ll have a more comprehensive model for how solar system bodies form and develop – including common, “C-type” carbonaceous asteroids, of which Ryugu is one. 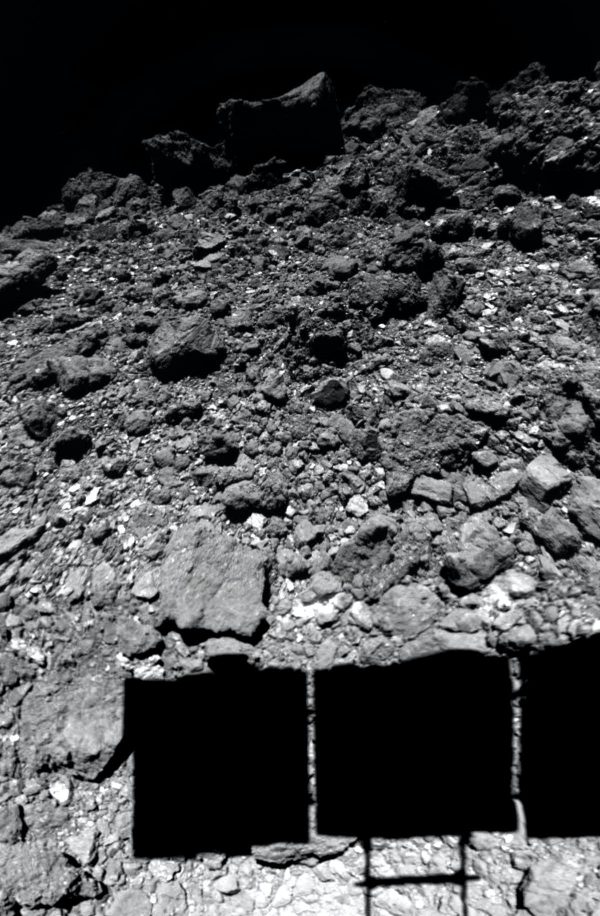 The surface of near-Earth carbonaceous asteroid 162173 Ryugu, as observed by the Hayabusa2 spacecraft just before its landing. The spacecraft’s solar ray paddle casts a shadow on Ryugu’s surface.
JAXA/U. Tokyo/ Kochi U./ Rikkyo U./ Nagoya U./ Chiba Inst. Tech./ Meiji U./ U. Aizu/ AIST/ The Conversation.

The new paper describes how some parts of Ryugu are “bluer” and others are “redder.”

These terms relate to subtle variations in color of the asteroid surface across the visible spectrum. The Hayabusa2 team found that the equator and poles of the asteroid are bluer, whereas the midlatitudes are redder. Intriguingly, this color difference may be tied to age – or, rather, how long material is directly exposed to space. That’s because exposed surfaces are darkened and reddened by space weathering – bombardment by micrometeorites, solar and cosmic particles – and heating by the sun, which is the primary mechanism for Ryugu.

When Hayabusa2 fired its projectile from a distance of about a meter, and then its thrusters to move away from the asteroid, a cloud of redder, dark pebbles and fine grains blew outward before falling back onto the surface. The mission team concluded that these particles, originally only on the exposed surfaces of boulders, landed all over the sampling site, turning it from a slightly blue color to slightly red.

This observation offered the team an insight into the latitudinal “stripes” on Ryugu. Exposed material, reddened by the sun and by space weathering, slowly moves under the asteroid’s weak gravity from the topographically high equator and poles to the topographically low midlatitudes. This movement exposes fresher, bluer material at the equator and poles and deposits the reddened material in between.

What I found most exciting was that, from the analysis of the size and colors of craters on Ryugu, the Hayabusa2 team concluded that at some point the asteroid must have been closer to the sun that it is now. That would explain the amount of reddening of the surface. Using two different models for calculating the age of craters, the team estimated that this solar heating-induced reddening must have happened either eight million years ago or as recently as 300,000 years ago – a mere blink of an eye, cosmologically speaking.

These crater statistics, based on images collected by Hayabusa2, even show that the age of the overall asteroid surface itself is likely no more than around 17 million years, much younger than the time when the main-belt parent asteroids of Ryugu are thought to have broken apart, which happened hundreds of millions to over a billion years ago.

And so it is that the simple act of firing a small pellet of metal into a rather unremarkable asteroid has revealed a detailed story of that asteroid’s life, from formation, through its journey across the inner solar system, to the processes that continue to shape its surface today. That we can learn so much from visiting an asteroid and characterizing its surface is astonishing. What more will we learn when we get those samples back next year?

Bottom line: What mission researchers learned from the Hayabusa2 spacecraft’s rendezvous with the asteroid Ryugu.