Asteroid 2016 RB1 will pass safely – at about the distance of our geosynchronous satellites – on September 7, 2016.

Gianluca Masi of the Virtual Telescope Project in Italy created this looped animation of asteroid 2016 RB1 from images obtained September 6.

The asteroid will buzz Earth at about 23,900 miles (38,463 km). That’s just 0.10 times the Earth-moon distance. For comparison, television and other communications satellites orbit Earth at 22,300 miles. Scientists have tracked its orbit and say there is no risk of impact from the small asteroid.

Asteroid 2016 RB1 was first detected during the early hours of Monday, September 5 using the Mt.Lemmon Survey’s 60-inch (1.5-meter) Cassegrain telescope in Arizona. The space rock is an Aten asteroid, which belongs to a group of Near-Earth Objects that cross the orbits of Earth, Venus and even Mercury.

The bus-sized space rock is travelling at 18,119 miles per hour (29,160 km/h). The asteroid’s speed and nearness to our planet means that some lucky observers might see the asteroid’s movement in front of the stars. That observation will require a telescope, as it will be too dim to see with the unaided eye.

Although the flyby of the space rock favors Southern Hemisphere observers during closest approach, some observatories from different locations have been able to capture the speeding asteroid.

It is the third asteroid that comes closer than the moon’s distance during the first week of September, 2016. The other asteroids were 2016 RR1, which passed at 0.32 lunar distances on September 2, while hours later, asteroid 2016 RS1 flyby occurred at 0.48 times the Earth-moon distance. 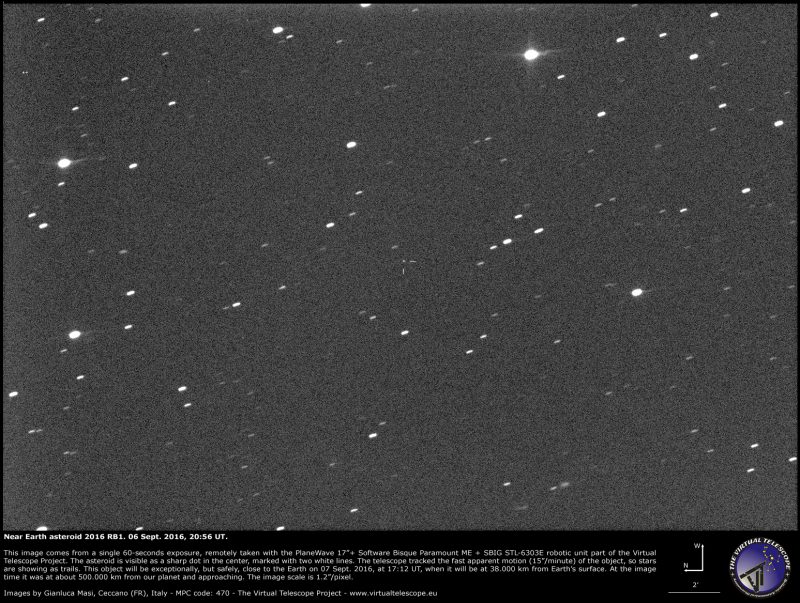 Asteroid 2016 RB1 imaged by Gianluca Masi, of the Virtual Telescope Project in Italy.