Watch online today as asteroid 2020 SW swoops in for its closest approach to Earth on Thursday. The asteroid will pass just 7% of the moon’s distance. Charts here for telescope users. How to watch online. 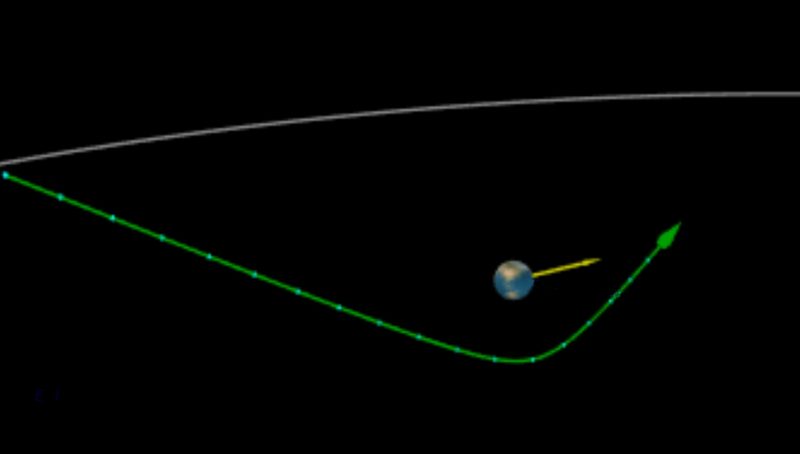 Small asteroid 2020 SW will pass so close to Earth on September 24 that our planet’s gravity will alter the space rock’s speed and bend its path through space. The green line indicates the asteroid’s trajectory, while the yellow line points to the sun. Gray line represents the moon’s orbit, but not to scale. Illustration by the Minor Planet Center, with modifications by Eddie Irizarry.

A small asteroid discovered on September 18, 2020, from Mt. Lemmon Observatory in Arizona will pass a lot closer than the moon’s distance on Thursday, September 24, 2020, passing even closer than geostationary satellites. Closest approach of this asteroid – labeled 2020 SW – should occur at around 11:18 UTC (7:18 am ET) on September 24. At closest approach, asteroid 2020 SW should pass just 7% of the moon’s distance.

Asteroid 2020 SW is estimated to be about 14 to 32 feet (about 4.5 to 10 meters) in diameter. It is brightening as it draws near, but won’t ever get bright enough to see with the eye alone. You can watch online via the Virtual Telescope Project in Rome, however, with host Gianluca Masi. The live feed is scheduled for September 23, 2020, starting at 22:00 UTC (5 p.m. CDT); translate UTC to your time.

See the poster below for more details.

Look below that for charts for telescope users. 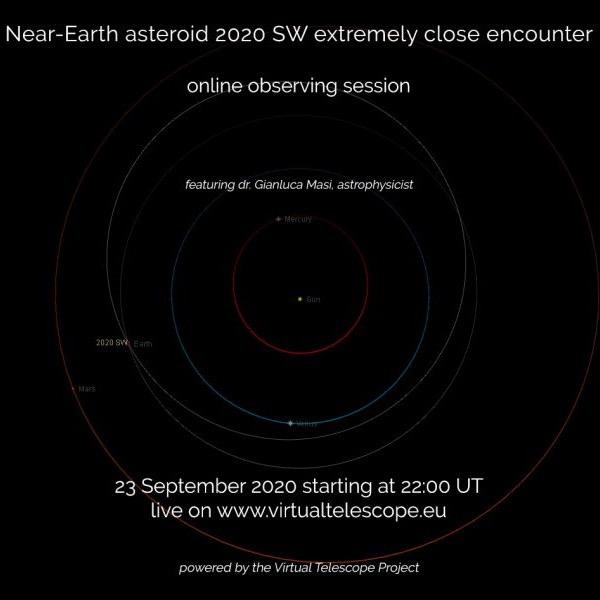 Although there’s still some uncertainty in the space rock’s orbit, calculations indicate there is no risk of impact. As a result of the asteroid’s orbit’s uncertainty, closest approach might occur up to 24 minutes earlier or later than expected.

Asteroid 2020 SW will pass at a safe distance, probably over Australia or New Zealand, during its closest approach, as shown on the illustration below: 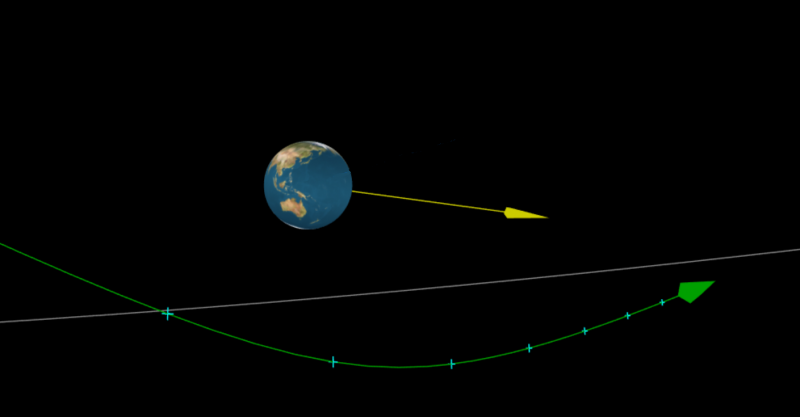 Asteroid 2020 SW will pass at a safe distance, probably over Australia or New Zealand, during its closest approach. Green line indicates the asteroid’s trajectory, with blue marks indicating position every 30 minutes. Yellow line points toward the sun. Illustration by the Minor Planet Center, with modifications by Eddie Irizarry.

The asteroid will be visible through small telescopes

Asteroid 2020 SW might reach a visual magnitude of 13.0 to 13.5, too faint to be seen by the unaided eye, but within the reach of observers using a 6- or 8-inch diameter telescope – that is, a very small telescope – and also larger telescopes. The space rock is currently in the constellation of Pegasus the Flying Horse, and will then move to the constellation of Pisces the Fish.

Observers using a telescope might detect the asteroid, which will look like a “star” moving very slowly because of the distance. If you are pointing the telescope at the correct position and time, carefully observe the stars’ pattern and compare it just five minutes later. If you are able to see a “star” that changed position, then it’s not a star, you have found the asteroid! 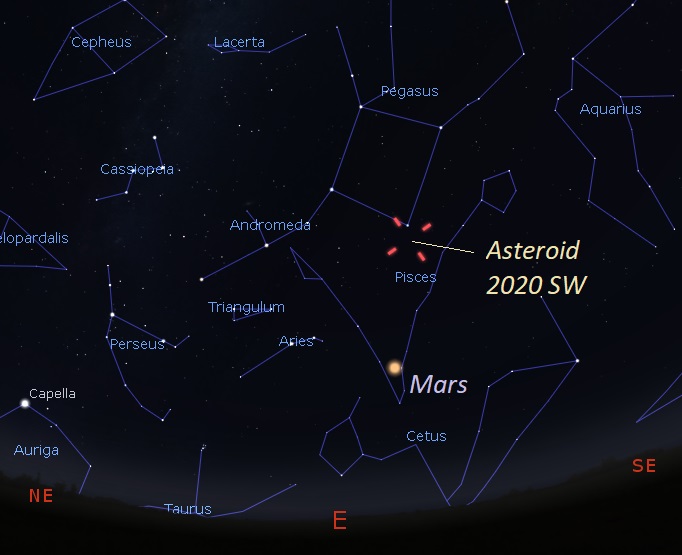 Location of asteroid 2020 SW on the night of Wednesday, September 23, at around 10:30 pm CDT (03:30 UTC on September 24). Facing east, as seen from U.S. The space rock will be located not too far from where we see the star Algenib (Gamma Pegasi), in the Great Square of Pegasus. Illustration by Eddie Irizarry using Stellarium. 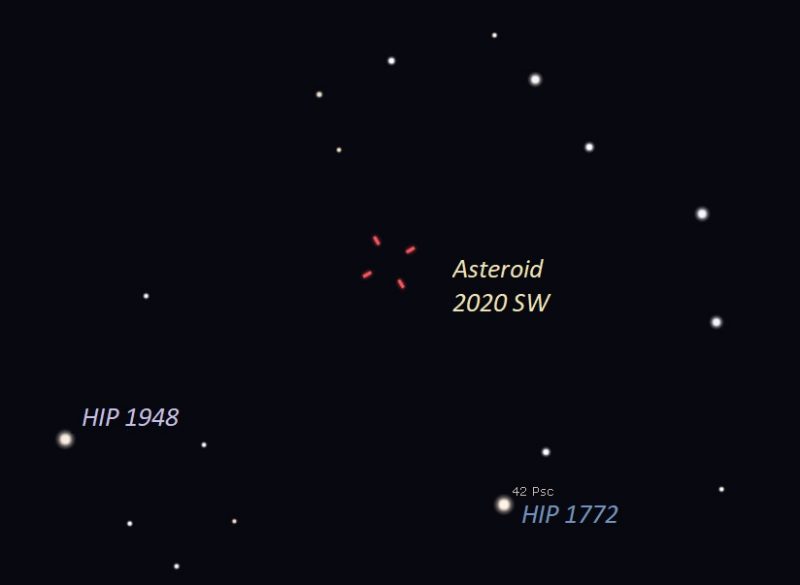 Have a computerized or “GoTo” telescope? Point it to one of the stars shown here (HIP 1948 or HIP 1772) on the night of Wednesday, September 23, 2020, at around 10:30 pm CDT (03:30 UTC on September 24) and you might be able to detect asteroid 2020 SW. If the object you’ve pinpointed is in fact the asteroid, you should be able to detect its motion after about 5 minutes. Illustration by Eddie Irizarry using Stellarium. 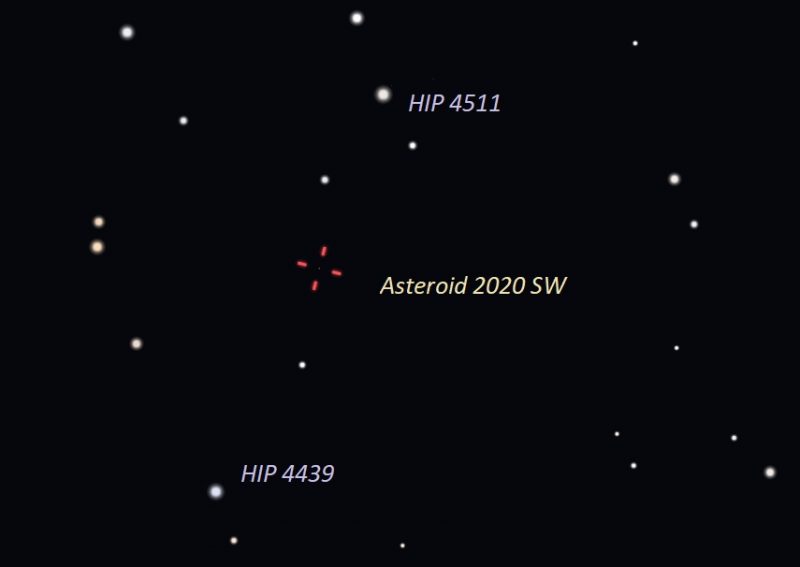 Want to try to spot asteroid 2020 SW very close to the time of its closest approach? Point your computerized or Go To telescope to one of these stars around 4:45 am CDT (5:45 EDT, 09:45 UTC) on Thursday, September 24, 2020. The space rock’s apparent motion should be easier to detect around that time, or just before dawn on September 24. Illustration by Eddie Irizarry using Stellarium.

Bottom line: Small asteroid 2020 SW will pass just 7% of the moon’s distance on September 24, 2020 at around 11:18 UTC (7:18 am ET; translate UTC to your time). There is no chance it will hit Earth. Online viewing via the Virtual Telescope Project is scheduled for September 23 starting at 22:00 UTC (5 p.m. CDT). To join online, go to Virtual Telescope’s website.