Asteroid 2019 MO exploded in our atmosphere with an energy of about 3 to 5 kilotons of TNT. Such events happen once or twice yearly, astronomers say. Most are unexpected, but this space rock was detected hours before it struck.

Scientists have confirmed a meteor impact with Earth’s atmosphere over the Caribbean last weekend. The bright flash was detected by by NOAA’s GOES-16 satellite and other meteorological satellites, showing the event occurred on Saturday, June 22, 2019, at around 5:25 p.m. EDT (21:25 UTC) some 170 miles (274 km) south of Puerto Rico. Astronomer Peter Brown, a meteor expert from University of Western Ontario in Ontario, Canada, said that an infrasound station located in Bermuda did detect airwaves produced by the space rock’s impact in the atmosphere. The object is believed to have been a small asteroid, and it was unusual in that it was detected prior to its impact – in the hours before – by the Atlas (Asteroid Terrestrial-impact Last Alert System) in Hawaii. Brown said the impact was:

By contrast, the atomic bomb dropped on Hiroshima on August 6, 1945, exploded with an energy of about 15 kilotons of TNT. Both the energy released, as well as the observations made from the Atlas Observatory, suggest the June 22 space rock was about 13 feet (4 meters) in diameter. Originally designated A10eoM1, the rock has now been designated as asteroid 2019 MO.

Although small space rocks and fragments rain down on Earth’s atmosphere continuously, experts at NASA’s Center for Near Earth Object Studies say that large events such as the one on June 22 occur about once or twice a year. Earth’s atmosphere does its job in protecting us in these cases, causing drag or friction that disintegrates most of these small objects before they strike the ground (although a few do strike, and more fall into the ocean). Read more: Whoa! 26 atom-bomb-scale asteroid impacts since 2000

Earth got hit a few days ago by newly-discovered asteroid 2019 MO.@pgbrown has more graphics.

Looks to be a mighty impressive event, for sure.

Some satellite images show the bright flash produced by the meteor, and seconds later, a line of its dissipating smoke trail. 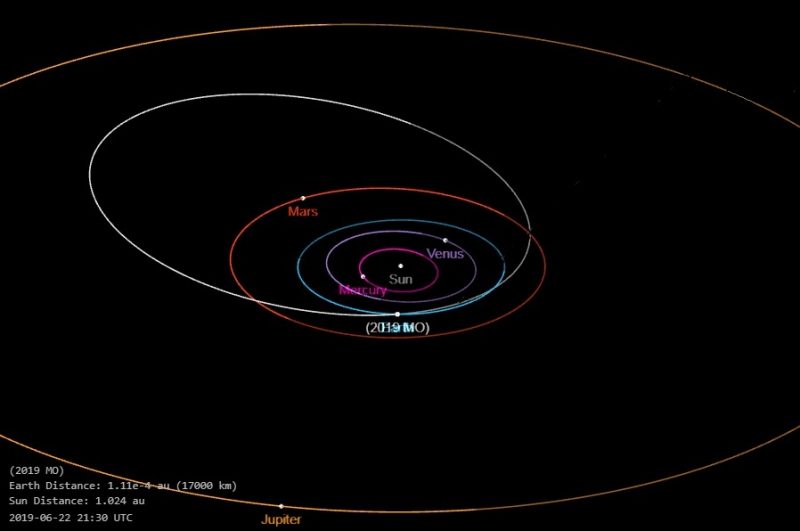 Asteroid 2019 MO is believed to have had an orbit outside that of Earth and extending almost to Jupiter’s orbit. Image via NASA/JPL-Caltech.

According to Italian amateur astronomer Ernesto Guido, this is only the fourth time in history that an impacting object was observed prior to atmospheric entry.

Bottom line: Asteroid 2019 MO exploded in Earth’s atmosphere on June 22, 2019, with an energy equivalent to about 3 to 5 kilotons of TNT. Such events happen unexpectedly, once or twice yearly, astronomers say. This one was unusual in that the asteroid was detected in the hours before it struck.