The low velocity of asteroid 2018 WV1 suggests it’s a fragment of the moon, ejected when a larger asteroid hit the moon long ago. It’ll pass closest during the night Saturday, according to clocks in the Americas. 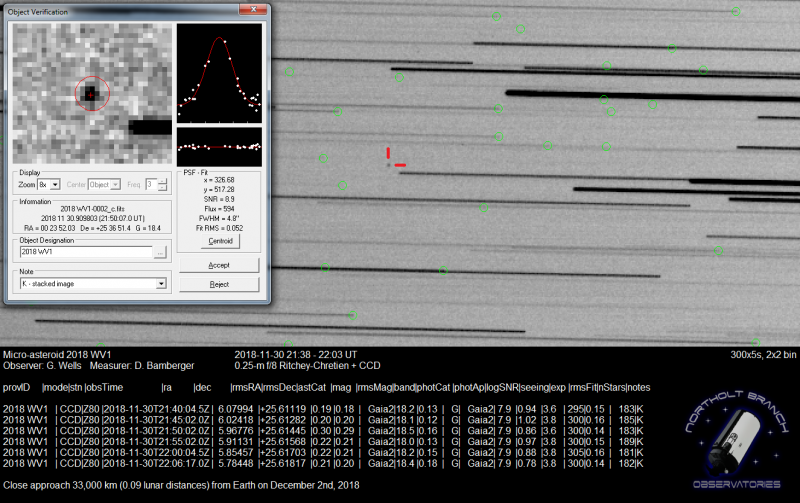 Very small asteroid 2018 WV1 on November 30 – slightly more than a day prior to its closest approach to Earth – via Northolt Branch Observatories.

Daniel Bamberger of Northolt Branch Observatories, a private observatory in Northolt, London, U.K., wrote late last night (November 30, 2018) about a small asteroid – just discovered – that will sweep extremely close to Earth Sunday morning, December 2, 2018. The asteroid designated 2018 WV1 will sweep closest at 03:11 UTC on Sunday (10:11 p.m. EST on Saturday; translate to your time). It will come within 0.09 lunar distances (32,911 km / 20,450 miles), making it the third-closest asteroid to pass Earth this year. Its estimated diameter is between 8.2 and 18.3 feet (2.5 and 5.6 meters). Bamberger wrote:

2018 WV1 was found on November 29 at the Catalina Sky Survey in Arizona, U.S. It will make a close encounter on Sunday morning, coming within 27,000 km (16,800 mi) from the Earth’s surface – closer than the geostationary satellites.

Besides its very close approach, 2018 WV1 is interesting for several reasons. One is its very low velocity relative to Earth: This makes it very likely that 2018 WV1 is a piece of lunar ejecta, a fragment of the moon that was ejected into space when a larger asteroid hit the moon a long time ago.

When 2018 WV1 was discovered, the initial orbit showed a 2 percent chance of hitting the Earth in early December. Luckily, that possibility was ruled out soon after.

Even if it had hit us, the object is too small to be a threat.

To help further refine its orbit, we have observed 2018 WV1 tonight from [Northolt Branch Observatories]. The asteroid was at a distance of 285,000 km [177,000 miles] from Earth at that time, and approaching, still a faint object at 19th magnitude.

According to The Watchers, since the beginning of 2018 observatories on Earth have detected 70 asteroids with flyby distance within 1 lunar distance.

Bottom line: Astronomers found asteroid 2018 WV1 on November 29. On December 2, it will pass closer to Earth than geosynchronous satellites.