Binary asteroids – that is, asteroids with moons – aren’t uncommon. More than 300 have been discovered so far. Astronomers found a moon for 2018 EB when it swept closest to Earth on October 7. 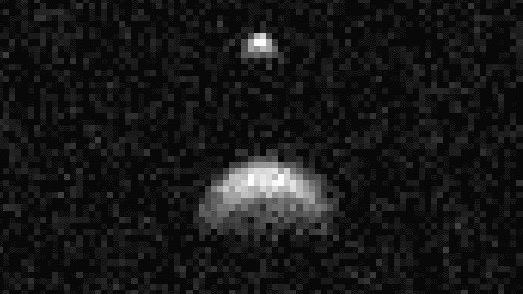 Asteroid 2018 EB has an orbit around the sun that’s very similar to Earth’s orbit, but with a different inclination. As a result, every year for countless millions or even billions of years, this space rock has been coming relatively close to our planet twice, in April and October. In April, 2018, astronomers spotted it, at last, using NASA’s NEOWISE spacecraft. Then, at the October passage, they found something else. Asteroid 2018 EB has a moon!

Scientists at Arecibo Observatory in Puerto Rico and at the Goldstone Radar in California made the recent radar observations showing the secondary or satellite asteroid – the moon – orbiting this asteroid, as both space rocks swept within 15 lunar-distances of Earth on October 7, 2018. This was close enough for astronomers using radar to get a better-than-usual look.

That’s when they spotted the moon.

We have been observing near-Earth asteroid 2018 EB for the past 3 days. At its closest approach, it was 15x farther than the Moon. Radar images from Goldstone and Arecibo show that it’s a binary! #TeamRadar pic.twitter.com/Pm9cJ7d3PU

The asteroid’s approaches of this year are the closest until 2147, as the space rock comes by then at less than 4 times the Earth-moon distance, according to NASA/JPL.

Asteroids with companions or moons aren’t uncommon. Astronomers have identified more than 300 space rocks with moons. Some have two moons; that is, some asteroids are triple. 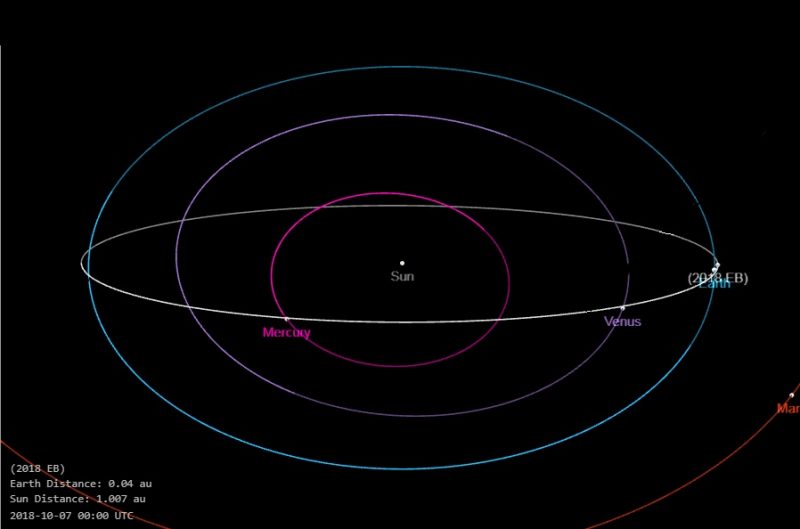 The orbit of binary asteroid 2018 EB (in white) is similar to Earth’s, but with a different inclination. (NASA/JPL)

Asteroid 2018 EB is classified as a potentially hazardous object, meaning it comes close to Earth during parts of its orbit, and it’s large enough to cause regional damage if it were to strike us.

But no strikes by this asteroid, or its moon, are anticipated anytime soon. The trajectory of the space rock has been calculated for at least the next 171 years, and calculations show all passes will be at safe distances.