Today’s flare was associated with an Earth-directed CME. Most CMEs reach Earth in one to three days, making this a great weekend to watch for northern lights.

A solar flare – a powerful burst of radiation from the sun – took place today (April 11, 2013), peaking at 3:16 a.m. EDT (716 UTC). This morning’s event was considered a mid-level event, with a classification of M6.5. It was 10 times less powerful than the strongest flares, which are labeled X-flares. Still, NASA says:

This is the strongest flare seen so far in 2013.

Today’s flare was associated with an Earth-directed coronal mass ejection (CME). Experimental NASA research models show that the CME began at 3:36 a.m. EDT on April 11 and that the charged particles left the sun at over 600 miles per second (1,000 miles per second). Most CMEs reach Earth in one to three days, which means this might be a great weekend to watch for auroras, or northern lights. GPS and communications signals might also undergo some disruption. 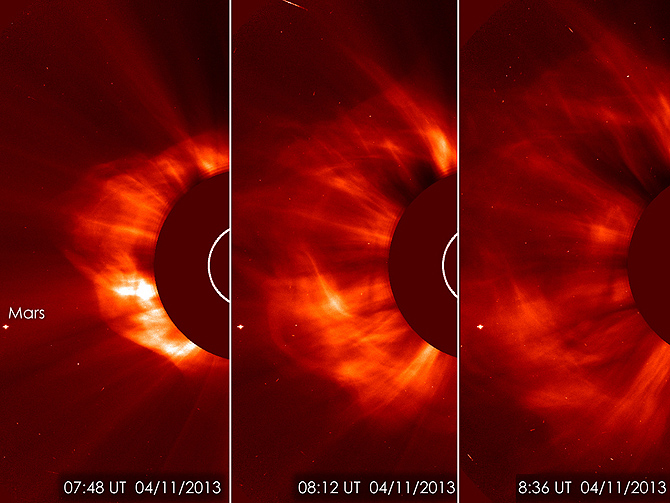 The Solar Heliospheric Observatory (SOHO) captured this series of images of a coronal mass ejection (CME) on the morning of April 11, 2013. The planet Mars, which is nearly behind the sun now as seen from Earth – thus located along our line of sight to the sun – can be seen on the left. View larger. Image via ESA/NASA/SOHO/GSFC

NASA says that M-class flares are the weakest flares that can still cause some space weather effects near Earth. This flare did produce a radio blackout, which has since subsided. The blackout was categorized as an R2 on a scale between R1 and R5 on NOAA’s space weather scales.

A CME can send billions of tons of solar particles into space, which, if they encounter Earth, can also affect electronic systems in satellites and on the ground. Harmful radiation from this event can’t pass through Earth’s atmosphere, however; there is no danger to humans on the ground. On the other hand, these events can disturb the atmosphere in the layer where GPS and communications signals travel. This disrupts the radio signals for as long as the flare is ongoing, anywhere from minutes to hours. 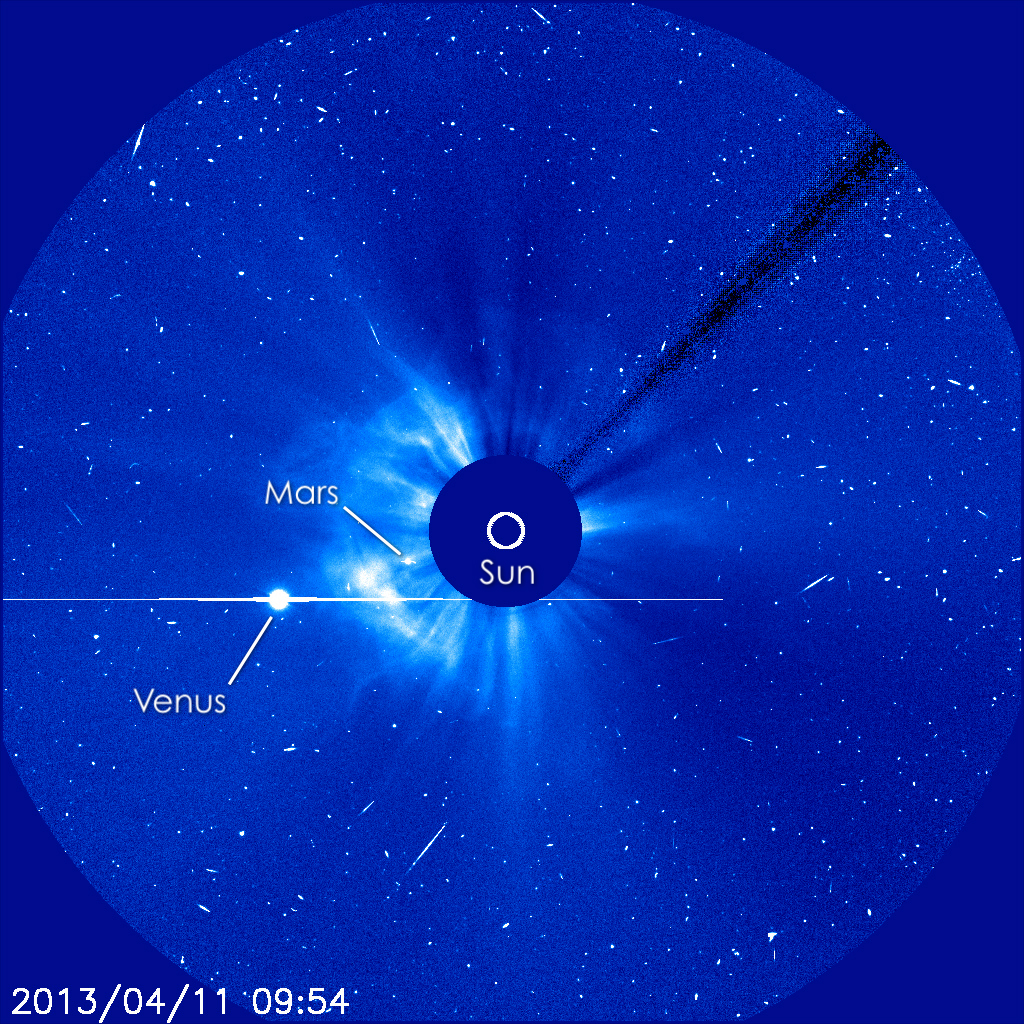 SOHO also captured this coronagraphic (a telescopic attachment designed to block out the direct light from a star so that nearby objects can be seen) image of the CME as it moves further out into the heliosphere. Notice Mars (nearly behind the sun) and Venus (to one side of the sun as seen from Earth now). View larger. Image via ESA/NASA/SOHO/GSFC

We’ve been seeing many solar flares for some months. The sun’s normal 11-year activity cycle is now ramping up toward solar maximum, which is expected in late 2013. Humans have tracked this solar cycle continuously since it was discovered, and it is normal for there to be many flares a day during the sun’s peak activity.

Bottom line: NASA says the April 11, 2013 solar flare was the strongest flare so far this year.