Another asteroid flies through Earth-moon system on Thursday

For the second time in two days, an asteroid is sweeping safely through the Earth-moon system. How to watch online.

For the second time in two days, an asteroid is flying safely between the moon’s orbit and Earth. This one is smaller than yesterday’s (about 10 meters in contrast to yesterday’s 30-meter-asteroid). It’s about half the size of the asteroid that exploded in the air over Chelyabinsk, Russia last year, injuring over 1,000 people. Today’s asteroid is labeled 2014 EC. It’s coming even closer than yesterday’s asteroid, 0.2 lunar distances in contrast to 0.9 lunar distances yesterday. That’s 48,000 miles (77,000 km) away. There is no immediate threat to Earth from this asteroid.

You can watch online via the Virtual Telescope Project. Also, check out Slooh. 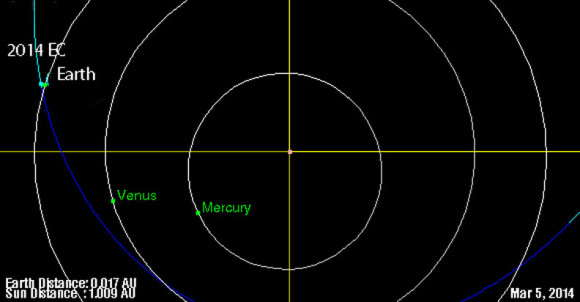 According to NASA, an asteroid flies closer to Earth than the moon about 20 times each year. That has no doubt been happening for your whole life … and for billions of years into the past. Yes, sometimes they do strike, but the one today will not.

Amateur astronomers in Europe, the Middle East and Africa might spot today’s asteroid with their telescopes. It will be shining at around magnitude 13.5-14.0 for a couple of hours centered on closest approach, moving through the constellations Hydra, Antlia and Vela.

Bottom line: An asteroid will fly within the Earth-moon system on Thursday, March 6, 2014. This is the second asteroid pass in two days. This asteroid, 2014 EC, will pass within 48,000 miles. NASA says we get about 20 such passes each year.