The violent history of Andromeda, the big galaxy next door

“The Milky Way is on a collision course with Andromeda in about 4 billion years. So knowing what kind of a monster our galaxy is up against is useful in finding out the Milky Way’s ultimate fate.” 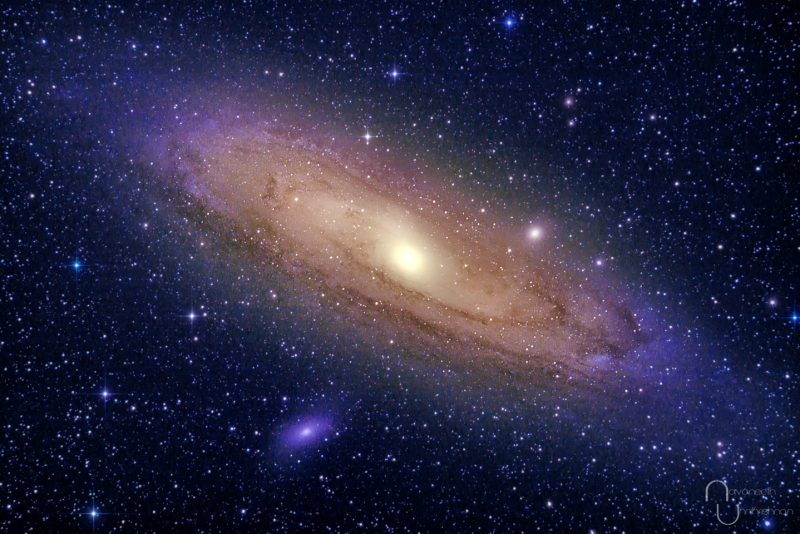 Navaneeth Unnikrishnan of Kerala, India, created this wonderful stacked image of the Andromeda galaxy with images taken in 2014.

Standing outside on a clear night, in a dark country location, you can look across vast space to see the Andromeda galaxy, aka M31 – the large spiral galaxy next door to our Milky Way – the most distant thing we humans can see with the eye alone. This huge galaxy is twice the diameter of our Milky Way at about 200,000 light-years. It contains about a trillion stars, in contrast to the Milky Way’s 250-400 billion. To the eye, it looks peaceful, but, as astronomers have studied it, they’ve uncovered a violent past and future. For example, on October 1, 2019, astronomers announced evidence for two major “migration events” in the history of the Andromeda galaxy, that is, events where smaller dwarf galaxies merged with the larger galaxy. The more recent one happened a few billion years ago and the older event many billions of years before that.

The evidence for the two events comes from the relatively new field of galactic archaeology, that is, the use of the motions and properties of stars and star clusters – in this case, globular star clusters – to reconstruct a galaxy’s history. A statement from Gemini Observatory explained:

Gas and dwarf galaxies in the vast cosmic web follow the gravitational paths laid out by dark matter – traversing filaments, they migrate slowly toward collections of dark matter and assemble into large galaxies. As dwarf galaxies are pulled in by gravity, they are also pulled apart, leaving behind long trailing streams of stars and compact star clusters.

Astronomers study the leftover streams of stars – still visible in modern galaxies – to unearth a galaxy’s history. In this case, the astronomers analyzed data from the Pan-Andromeda Archaeological Survey, known as PAndAS. Their study was published in the peer-reviewed journal Nature on October 2. Australian National University researcher Dougal Mackey co-led the study with Geraint Lewis from the University of Sydney. Lewis commented:

We are cosmic archaeologists, except we are digging through the fossils of long-dead galaxies rather than human history.

By tracing the faint remains of these smaller galaxies with embedded star clusters, we’ve been able to recreate the way Andromeda drew them in and ultimately enveloped them at the different times. 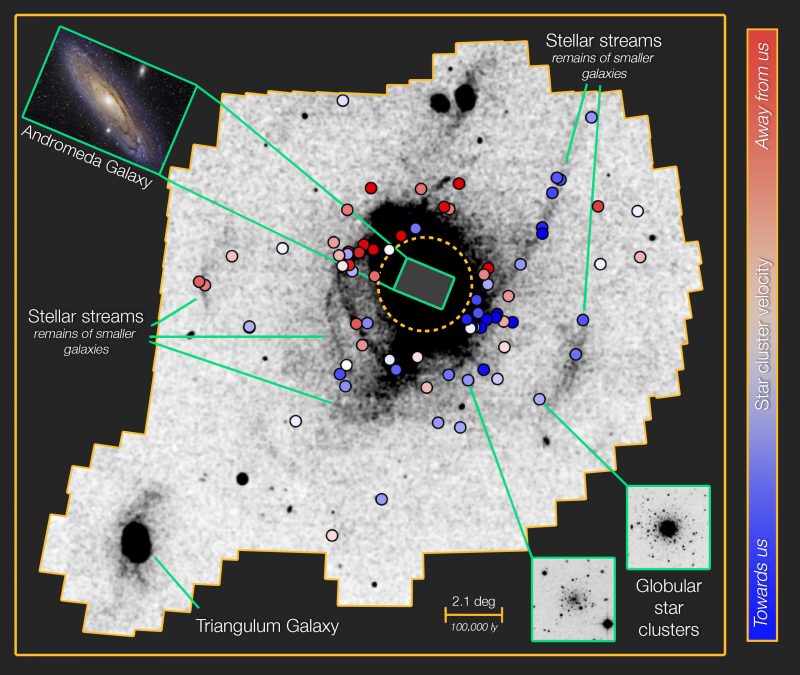 View larger. | Here is part of the evidence for 2 ancient migration events in the Andromeda galaxy. Astronomers studied this galaxy’s globular star clusters (lower right insets), indicated by colored circles. They are located in the outer halo of the Andromeda Galaxy, beyond the bright disk of the galaxy (upper left inset). The clusters separate into 2 groups: one associated with stellar streams and one not associated with stellar streams. The orbits of these groups of globular clusters are very different from each other, a result that points to 2 separate migration events in the history of the galaxy. The color of each circle indicates the line-of-sight velocity of the corresponding star cluster. Image via Australian National University/NSF’s National Optical-Infrared Astronomy Research Laboratory/Gemini Observatory.

This is very weird and suggests that the extragalactic meals are fed from what’s known as the ‘cosmic web’ of matter that threads the universe.

More surprising is the discovery that the direction of the ancient feeding is the same as the bizarre ‘plane of satellites,’ an unexpected alignment of dwarf galaxies orbiting Andromeda.

Mackey and Lewis were part of a team that previously discovered such planes were fragile and rapidly destroyed by Andromeda’s gravity within a few billion years. Lewis said:

This deepens the mystery as the plane must be young, but it appears to be aligned with ancient feeding of dwarf galaxies. Maybe this is because of the cosmic web, but really, this is only speculation.

We’re going to have to think quite hard to unravel what this is telling us.

These astronomers also spoke of the future of the Andromeda galaxy and our Milky Way. The two large galaxies are currently approaching each other, and they are expected to collide several billion years from now. Mackey said:

The Milky Way is on a collision course with Andromeda in about four billion years. So knowing what kind of a monster our galaxy is up against is useful in finding out the Milky Way’s ultimate fate. 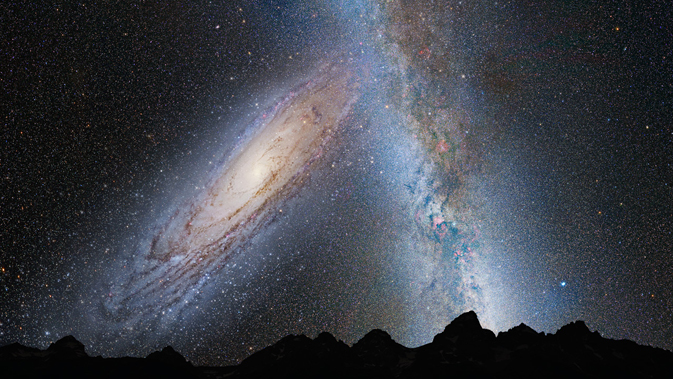 Artist’s concept of Earth’s night sky in 3.75 billion years. The Andromeda galaxy (left) will fill our field of view then, astronomers say, as it heads toward a collision, or merger, with our Milky way galaxy. Image via NASA/ESA/Z. Levay and R. van der Marel, STScI/T. Hallas; and A. Mellinger. Read more about the eventual merger of the Milky Way and Andromeda galaxies.

Bottom line: Astronomers used galactic archaeology – the study of star motions in a modern galaxy – to uncover past mergings of small galaxies with the Andromeda galaxy. They say this work will help them understand a collision due to occur between the Andromeda galaxy and our Milky Way billions of years from now.