A mega-tsunami on ancient Mars?

It’s likely Mars was once a water world with rivers, lakes and maybe even an ocean. New research lends support to the possibility that an asteroid slammed into Mars’ ocean 3.5 billion years ago, creating a vast tsunami. 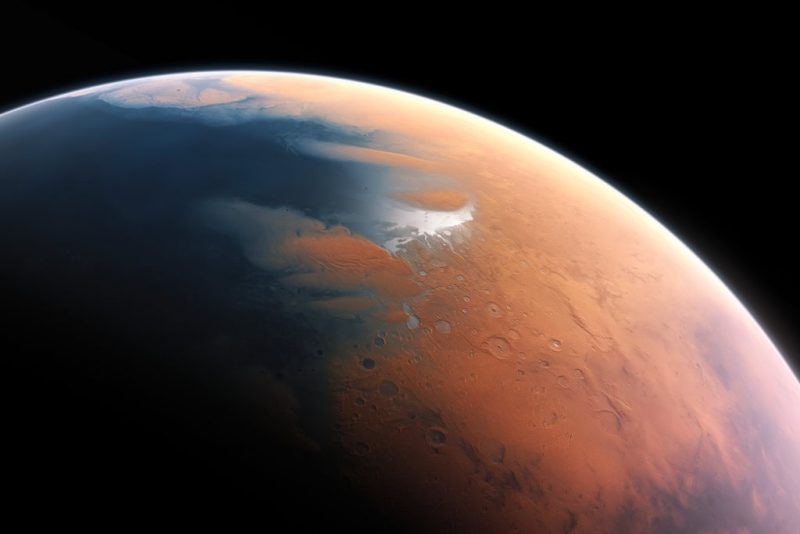 Artist’s concept showing a proposed Mars ocean, some 4 billion years ago. According to some researchers, the young planet Mars then would have had enough water to cover its entire surface in a liquid layer about 500 feet (140 meters) deep. But it’s more likely the liquid would have pooled to form an ocean occupying almost half of Mars’s northern hemisphere, in some regions reaching depths greater than a mile (1.6 km). Image via ESO/M. Kornmesser.

It’s now commonly accepted among scientists that Mars used to be a lot wetter than it is today, a few billion years ago. As well as rivers and lakes, there has been growing evidence for a former ocean in the northern hemisphere. Now, new research is lending support to the possibility that an asteroid slammed into that ocean 3.5 billion years ago, creating a mega-tsunami 1,000 feet (309 meters) high!

The new peer-reviewed findings, from Francois Costard, a scientist at the French National Centre for Scientific Research (CNRS), were first published in the Journal of Geophysical Research Planets on June 26, 2019.

Costard has advocated his theory since 2017 to explain some unusual surface features called Thumbprint Terrain – concentric ridges that look like those in a thumbprint – in Mars’ Arabia Terra region. A very similar theory had also been suggested by two other groups of astronomers back in 2016. In their scenario, the asteroid impact caused not one but two tsunamis. 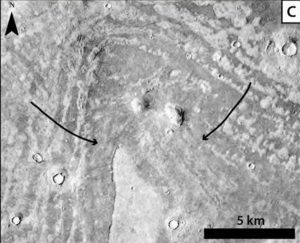 Part of the Thumbprint Terrain in the Arabia Terra region of Mars, that might have been created by a mega-tsunami 3.5 billion years ago. Image via American Geophysical Union/Discover.

Now, Costard thinks he has found the impact crater that the asteroid created. He attempted to trace back the direction that the tsunami would have originated from, away from the Thumbprint Terrain. He narrowed down the possible impact location to 10 craters, before focusing on Lomonosov Crater. The shape of the crater indicates it was under water at the time, and it’s the right age (about 3 billion years old) and size (75 miles – 120 km – in diameter). From the new paper:

We attribute its broad and shallow rim, in part, to an impact into a shallow ocean as well as its subsequent erosion from the collapsing transient water cavity. The likely marine formation of the Lomonosov crater, and the apparent agreement in its age with that of the Thumbprint Terrain unit strongly suggests that it was the source crater of the tsunami. These results have implications for the stability of a late northern ocean on Mars.

If the tsunami scenario is correct, it has implications for the potential habitability of ancient Mars, since that means the northern ocean was still around 3.5 billion years ago. Until now, it has been thought that the planet lost most of its water closer to 3.7 billion years ago. That would allow an extra couple hundred million years in which life could have started. Alexis Rodriguez, a Mars geomorphologist at the Planetary Science Institute (PSI) in Tucson, Arizona, noted that the ocean sediments:

… may be a window into the subsurface habitability of Mars. 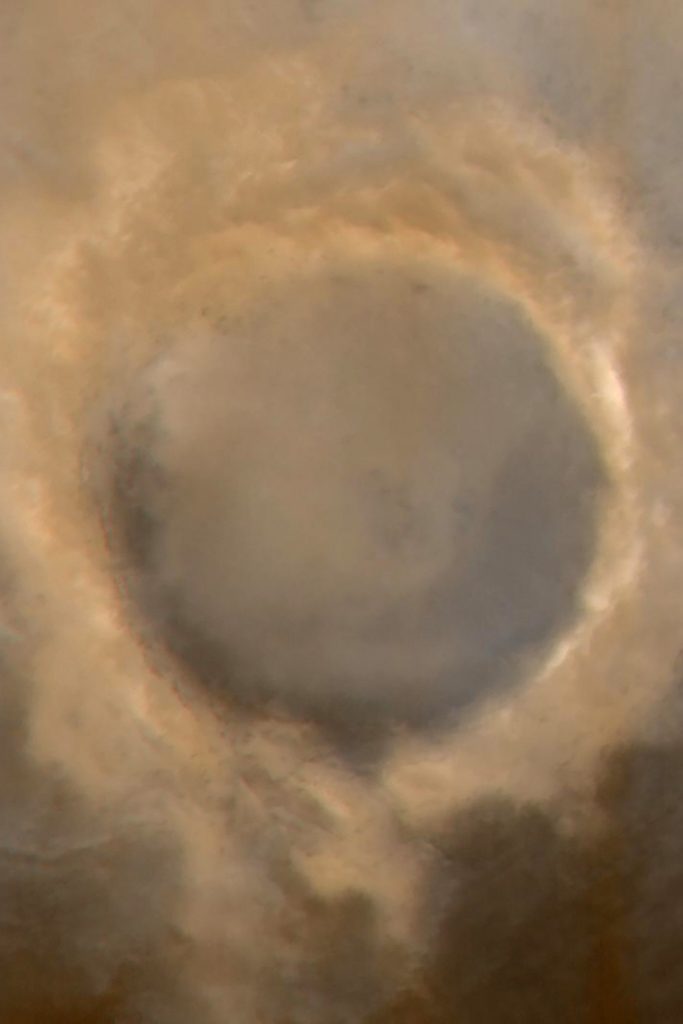 Orbital view of Lomonosov Crater, as seen by NASA’s Mars Global Surveyor spacecraft. This crater may have been formed by the asteroid impact that caused the tsunami(s) in the ancient ocean. Image via NASA/JPL/MSSS/NASA Photojournal.

There’s still a lot we don’t know about water on ancient Mars and the climate conditions that allowed it to exist on Mars’ surface, something it does not do today. As Paul Byrne, a planetary geologist at North Carolina State University, said:

It’s fair to say that we don’t yet fully understand the history of Mars’s climate, and certainly, the climate models we use will continue to be improved.

While evidence for the possible ocean has grown, it’s still not absolutely definitive. But if the findings regarding the Thumbprint Terrain are accurate, that would be pretty compelling evidence for the ocean. After all, how could you have a tsunami without an ocean?

Even if there was no ocean, though, Mars was still plenty wet, with rain, groundwater, aquifers, rivers and lakes. Early Mars was a lot more like Earth in many ways, but then the planet lost most of its atmosphere – for reasons still being investigated and debated – and the water dried up.

There have been recent findings that suggest liquid water aquifers still exist deep underground, and the Recurring Slope Lineae (RSL) features on some slopes near the equator may be evidence for trickles of briny water on the surface, but otherwise most of Mars’ current water is in the form of ice, at the poles and underground. Landers and rovers have also seen frost, snow and clouds (both water and carbon dioxide types), and orbiters have photographed fog in canyons and craters. But compared to a few billion years ago, Mars is much drier now, and colder, than it used to be. So we can only imagine what it would have been like to be able to stand there and watch the asteroid plummet into that Martian ocean.

Bottom line: Evidence for a possible ancient ocean in Mars’ northern hemisphere has grown in recent years, and now additional evidence suggests that a massive asteroid impact created a mega-tsunami about 3.5 billion years ago.