ALMA spots the twinkling heart of our Milky Way

Astronomers used the ALMA telescope in Chile to observe irregular flickers in millimeter-waves from the center of our Milky Way galaxy: the twinkling heart of the galaxy. 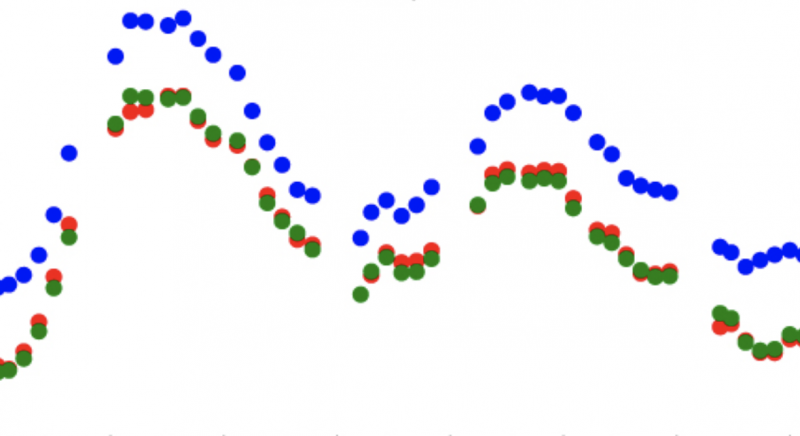 This image shows the flickering or twinkling heart of our Milky Way galaxy. These dots represent measurements of changes in the intensity of emission, at millimeter wavelengths, from the galaxy’s center. The changes were detected by the ALMA telescope in Chile. The colossal black hole at the galaxy’s center is called Sagittarius A* (pronounced Sagittarius A-Star). For a more detailed version of this graph, see below. Image via Y. Iwata et al./ Keio University/ ALMA.

Astronomers using the ALMA telescope in Chile’s Atacama Desert have now tracked quasi-periodic (irregular) flickers in millimeter-waves emanating from the center of our Milky Way galaxy.

They’ve interpreted the flickering as coming from spots of radio emission in a disk encircling the 4-million-solar-mass black hole at our Milky Way’s heart. The black hole is known as Sagittarius (Sgr) A* (pronounced Sagittarius A-Star). The radio spots appear to orbit the black hole closer than Mercury orbits our sun. Keio University graduate student Yuhei Iwata is lead author of the paper, published April 2, 2020, in the peer-reviewed Astrophysical Journal Letters. Iwata said in a May 22 statement from ALMA:

It has been known that Sgr A* sometimes flares up in millimeter wavelength. This time, using ALMA, we obtained high-quality data of radio-wave intensity variation of Sgr A* for 10 days, 70 minutes per day. Then we found two trends: quasi-periodic variations with a typical time scale of 30 minutes and hour-long slow variations.

The result is interesting not only because it’s a direct measurement of the flickering, or twinkling, radiation at the heart of the Milky Way, but also because, the astronomers believe, the observations are linked to the way space-time behaves in the extreme gravity environment surrounding a black hole.

Here’s the more detailed verson of the chart at the top of this post. It shows the variation of millimeter emission from Sgr A* detected with the ALMA telescope. The different color dots show the flux at different frequencies (blue: 234.0 GHz, green: 219.5 GHz, red: 217.5 GHz). Variations with about a 30-minute period are seen in the diagram. Image via Y. Iwata et al./ Keio University/ ALMA.

Astronomers have believed for some time that a supermassive black hole – with a mass of 4 million of our suns – is located at the center of Sgr A*. Their statement said:

Flares of Sgr A* have been observed not only in millimeter wavelength, but also in infrared light and X-ray. However, the variations detected with ALMA are much smaller than the ones previously detected, and it is possible that these levels of small variations always occur in Sgr A*.

Most people know that black holes themselves can’t “shine” in any way. By definition, a black hole’s gravity is so immense that nothing, not even light, can escape it. Instead, these astronomers said:

In the inner part of this disk, they said, where the emissions are thought to arise, the effect of the black hole’s powerful gravity would be extreme. There, any emissions that arise would be subject not only to the processes of ordinary physics, but also to strange effects described by Einsein’s theory of special relativity. The theory of special relativity explains how space and time are linked for objects that are moving at a consistent speed – and a high speed – in a straight line. It would explain, for example, how space and time may be linked for milllimeter waves emanating from a disk in the vicinity of a supermassive black hole. Tomoharu Oka, a professor at Keio University, said:

This emission could be related with some exotic phenomena occurring at the very vicinity of the supermassive black hole.

The astronomers’ scenario is as follows:

Hot spots are sporadically formed in the disk and circle around the black hole, emitting strong millimeter waves. According to Einstein’s special relativity theory, the emission is largely amplified when the source is moving toward the observer with a speed comparable to that of light. The rotation speed of the inner edge of the accretion disk is quite large, so this extraordinary effect arises. The astronomers believe that this is the origin of the short-term variation of the millimeter emission from Sgr A*.

The team supposes that the variation might affect the (failed) effort to make an image of the Milky Way’s supermassive black hole with the Event Horizon Telescope. A group of astronomers worked hard to try to produce this image; they kept saying they believed they were just months away from capturing it. But they never did capture this image. Instead – to much fanfare in April 2019 – they acquired the first-ever image of a supermassive black hole in the distant galaxy M87. Oka said:

In general, the faster the movement is, the more difficult it is to take a photo of the object. Instead, the variation of the emission itself provides compelling insight for the gas motion.

The astronomers said they hope to implement a long-term monitoring campaign of the Milky Way’s supermassive black hole, with the ALMA telescope, in order to witness the moment when gas from the accretion disk is absorbed by the black hole. 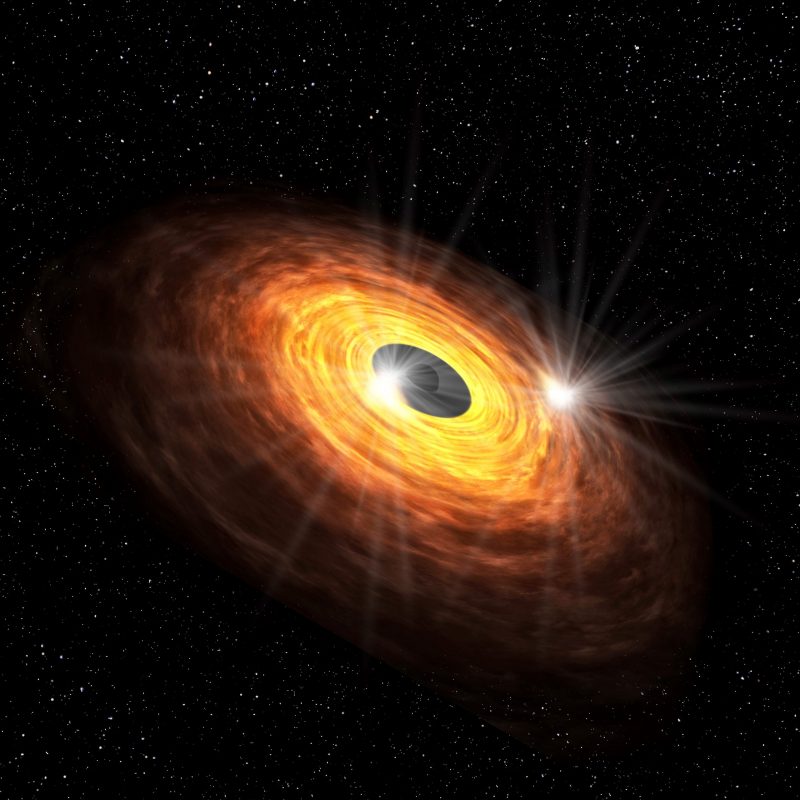 Artist’s concept of the gaseous disk around the supermassive black hole. Hot spots circling around the black hole could produce the quasi-periodic millimeter emission detected with ALMA. Image via Keio University/ ALMA.

Bottom line: Astronomers used the ALMA telescope in Chile to observe irregular flickers in millimeter-waves from the center of our Milky Way galaxy: the twinkling heart of the galaxy.

Source: Time Variations in the Flux Density of Sgr A* at 230 GHz Detected with ALMA