This distant galaxy – SPT0418-47 – surprised astronomers by being organized enough to have a spinning disk and a galactic bulge, early in the history of our universe.

Using the ALMA telescope in Chile, astronomers say they’ve found an extremely distant and therefore very young galaxy that surprised them by looking so much like our Milky Way. The galaxy is 12 billion light-years away. Thus we see the galaxy as it was 12 billion years ago, when – according to recent estimates of our universe’s age – the universe was only 1.4 billion years old. The galaxy is called SPT0418-47. It doesn’t appear to have spiral arms as our Milky Way does, these astronomers said, but it has two other features reminiscent of our Milky Way. It has a rotating disk, thought to be similar to the flat disk of our own galaxy, in which our own sun revolves around the galactic center. And it has a galactic bulge, a large group of stars packed tightly its center. This is the first time a bulge has been seen this early in the history of the universe, making SPT0418-47 the most distant Milky Way look-alike.

That’s surprising, these astronomers said, because they’d have expected galaxies at this point in the young universe to be “turbulent and unstable,” not organized enough to have disks and bulges. The astronomers’ statement said:

This unexpected discovery challenges our understanding of how galaxies form, giving new insights into the past of our universe.

Francesca Rizzo of the Max Planck Institute for Astrophysics in Germany led the research, which was published August 12, 2020, in the peer-reviewed journal Nature. Rizzo said in a statement:

This result represents a breakthrough in the field of galaxy formation, showing that the structures that we observe in nearby spiral galaxies and in our Milky Way were already in place 12 billion years ago.

The astronomers added that studying distant galaxies like SPT0418-47 is fundamental to our understanding of how galaxies formed and evolved. 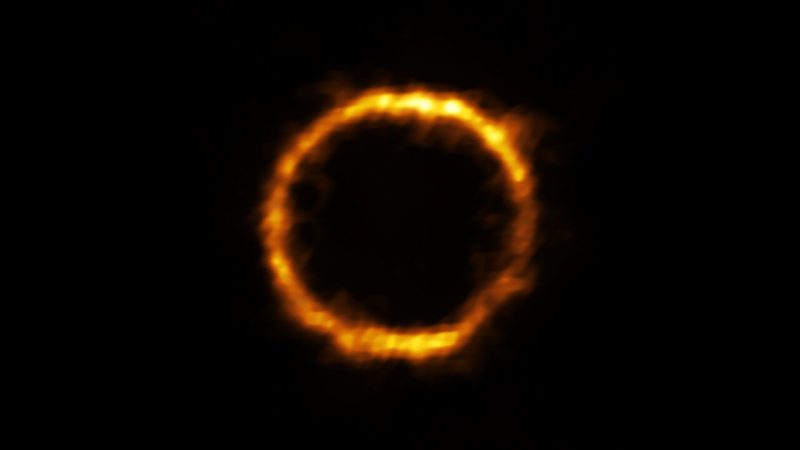 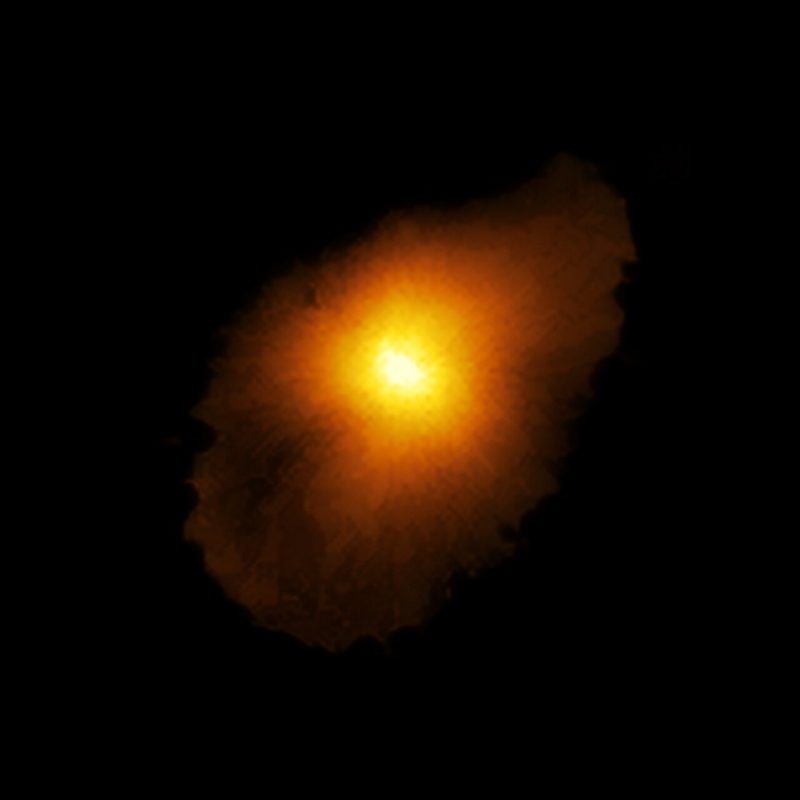 This image represents the distant galaxy’s true shape, as revealed by computer modeling that incorporated data from the lensed image and other observations of the galaxy. Image via ALMA/ ESO/ NAOJ/ NRAO/ Rizzo et al.

In their statement, the astronomers explained how they were able to see SPT0418-47 despite its distance of 12 billion light-years:

Because these galaxies are so far away, detailed observations with even the most powerful telescopes are almost impossible as the galaxies appear small and faint. The team overcame this obstacle by using a nearby galaxy as a powerful magnifying glass – an effect known as gravitational lensing – allowing ALMA to see into the distant past in unprecedented detail. In this effect, the gravitational pull from the nearby galaxy distorts and bends the light from the distant galaxy, causing it to appear misshapen and magnified.

The gravitationally lensed, distant galaxy appears as a near-perfect ring of light around the nearby galaxy, thanks to their almost exact alignment. The research team reconstructed the distant galaxy’s true shape and the motion of its gas from the ALMA data using a new computer modeling technique.

When I first saw the reconstructed image of SPT0418-47 I could not believe it: a treasure chest was opening.

Simona Vegetti, also from the Max Planck Institute for Astrophysics, is a study co-author. Vegetti said:

What we found was quite puzzling; despite forming stars at a high rate, and therefore being the site of highly energetic processes, SPT0418-47 is the most well-ordered galaxy disc ever observed in the early universe. This result is quite unexpected and has important implications for how we think galaxies evolve.

Will SPT0418-47 evolve into another Milky Way? These astronomers said they don’t think so. They said they expect it to evolve into a galaxy very different from our Milky Way, and to join the class of elliptical galaxies, which lack spiral arms, instead appearing a bit like American footballs.

Bottom line: Astronomers would have expected a galaxy seen at a distance of 12 billion light-years to be “turbulent and unstable.” They were surprised to find one – labeled SPT0418-47 – with a disk and bulge similar to our Milky Way. They say this galaxy is the most distant Milky Way look-alike yet found.

Source: A dynamically cold disk galaxy in the early Universe