A pure methane sea on Titan

We knew that Saturn’s moon Titan had seas and lakes of liquid hydrocarbons, but their exact composition was unknown until recently. 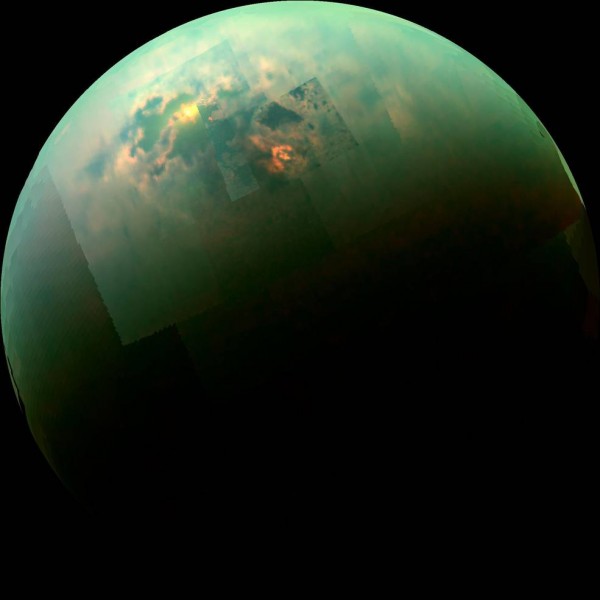 Titan, Saturn’s largest moon, is surely our solar system’s most intriguing moon in part because of its thick atmosphere, and also because of the bodies of liquid on its surface. The large ones are called maria (seas) and the small ones lacus (lakes). They cover almost 2% of Titan’s surface. This liquid isn’t water. Instead, it’s liquid hydrocarbons, combinations of methane and ethane. Now one Titan sea has now been found to be filled with almost pure methane. It has a seabed covered by a sludge of organic-rich material and is possibly surrounded by wetlands.

A new study using scans from radar imaging by the Cassini spacecraft – during flybys of Titan between 2007 and 2015 – confirms the liquid methane composition of of this sea on Titan, which is called Ligeia Mare.

We expected to find that Ligeia Mare would be mostly ethane, which is produced in abundance in Titan’s atmosphere, when sunlight breaks methane molecules apart.

Instead, this sea is predominantly made of pure methane. 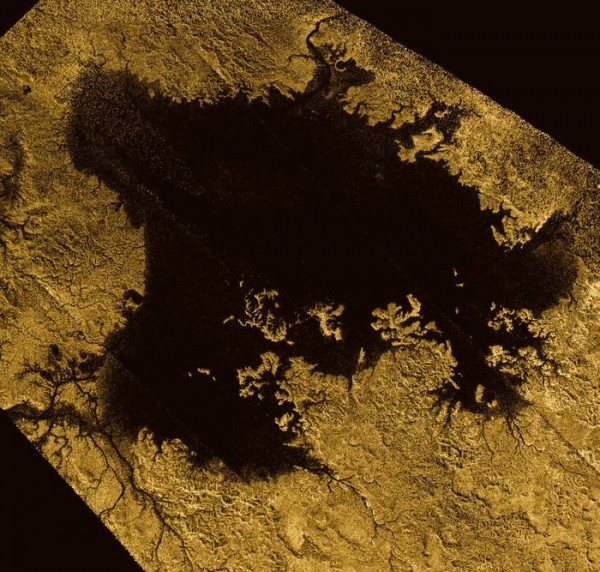 Ligeia Mare, shown here in a false-color image from the international Cassini mission. Its shorelines extend for over 1,240 miles (2,000 km). It is now known to be filled with liquid methane. Read more about this image, which is via the Cassini spacecraft.

There are three large seas on Titan, all close to the moon’s north pole, surrounded by dozens of smaller lakes in the moon’s northern hemisphere. Meanwhile, just one lake has been found in Titan’s southern hemisphere. Ligeia Mare is named for one of the sirens in Greek mythology. It’s the second-largest known body of liquid on Titan, after Kraken Mare, to which it may be hydrologically connected. That connection might be a clue to the composition of the lake. Le Gall explained:

Either Ligeia Mare is replenished by fresh methane rainfall, or something is removing ethane from it. It is possible that the ethane ends up in the undersea crust, or that it somehow flows into the adjacent sea, Kraken Mare, but that will require further investigation.

The exact make-up of Titan’s lakes and seas remained elusive until recently. In their research, Le Gall’s team use observations of heat emission from Ligeia Mare, and they made use of data from a radio sounding experiment performed in May, 2013, by Marco Mastrogiuseppe, who also collaborated on the current study. Their statement said:

During the radio sounding, the instrument detected echoes from the seafloor and inferred the depth of Ligeia Mare along Cassini’s track over the sea – the first-ever detection of the bottom of an extraterrestrial sea. The scientists were surprised to find depths in Ligeia Mare as great as 500 feet (160 meters) at the deepest point along the radar track.

With this depth information, Le Gall and her colleagues were able to separate the contributions made to the sea’s observed heat emission by the liquid sea and the seabed. Le Gall said:

This revealed that the seabed of Ligeia Mare is likely covered by a sludge layer of organic-rich compounds. 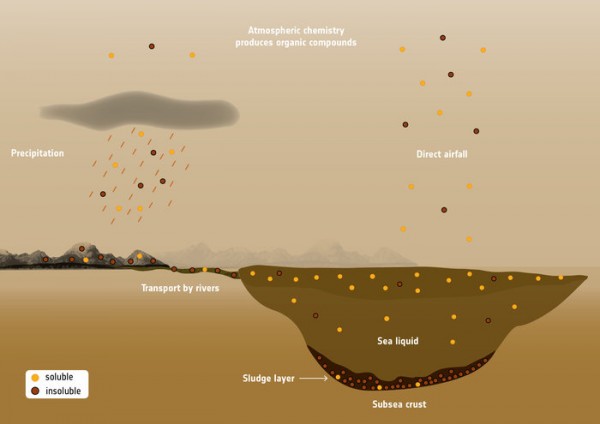 How different organic compounds make their way to the seas and lakes on Titan, Saturn’s largest moon. In the atmosphere of Titan, nitrogen and methane react to produce a wealth of organic molecules. Scientists believe that the heaviest of these molecules fall to the surface. When they reach the sea, either by directly falling from the air, via rain, or through the rivers, some are dissolved in the liquid methane (shown in yellow), while the insoluble ones – such as nitriles and benzene, shown in brown – sink to the sea floor. Image viaESA.

Bottom line: We knew that Saturn’s moon Titan had seas and lakes of liquid hydrocarbons, but their exact composition was elusive. Now Ligeia Mare – the second-largest of Titan’s seas – has been found to be filled with almost pure methane.