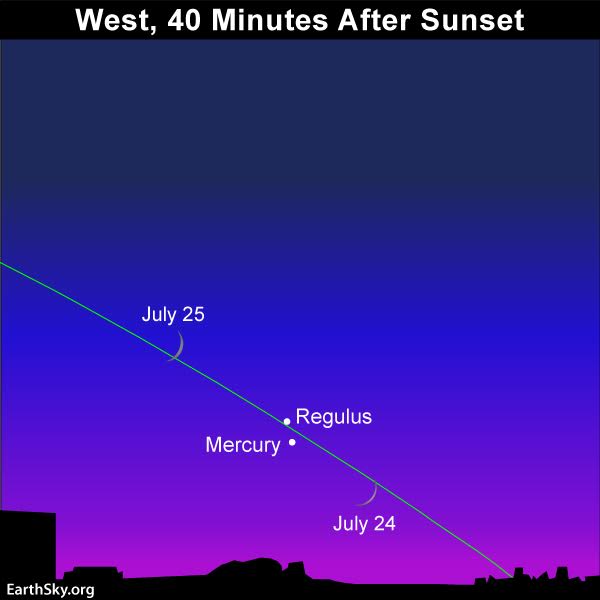 Tonight – July 24, 2017 – find an unobstructed horizon in the direction of sunset, shortly after the sun goes down. If possible, perch yourself on a hill or balcony, so that you can view a bit more sky beyond your ground-level horizon. Then, as the twilight fades around you, search for the pale, whisker-thin waxing crescent moon near the sunset point on the horizon. You might try starting your search 30 or 40 minutes after sunset. Binoculars will come in handy! If you’re lucky, you might also see the star Regulus and planet Mercury.

From mid-northern North American latitudes, the moon follows the sun beneath the horizon an hour after sunset. At more southerly latitudes, like those in South America, the moon stays out longer after sunset, so the young moon (and Regulus and Mercury) should be easier to spot from that part of the world.

Click here for recommended almanacs; they can tell you the moon’s setting time in your sky.

After you catch the moon – or even if you miss the moon – try looking for Mercury and Regulus in the deepening evening twilight. We talk more about Mercury on our post for July 25.

Next month, in the United States, the new moon will actually pass right in front of the sun on August 21, 2017, to stage a total solar eclipse.

Thank you! Your submission has been received!
Oops! Something went wrong while submitting the form.
END_OF_DOCUMENT_TOKEN_TO_BE_REPLACED