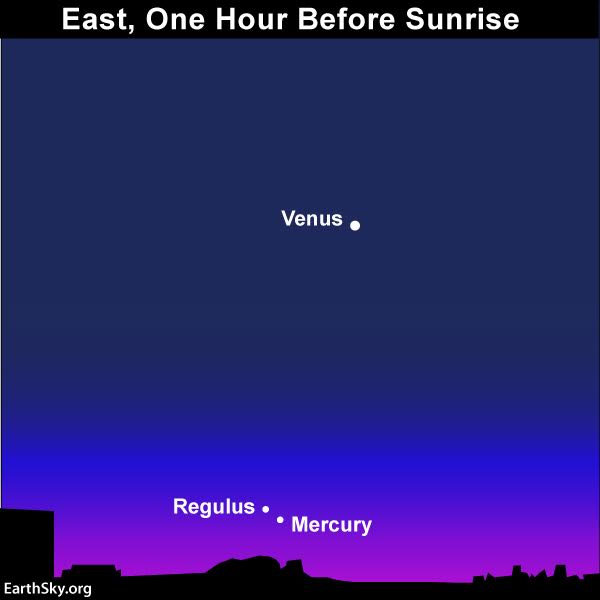 This weekend – on September 10 and 11 – try to catch Mercury in the morning sky. Mercury is sometimes called the most elusive planet because it always stays near the sun in the sky. Right now, you’ll have the best luck spotting Mercury if you’re in the Northern Hemisphere. Southern Hemisphere observers might see the planet, too, but it’ll be much harder because Mercury will stay lower in the sky before sunrise. Mercury will reach its greatest morning elongation from the sun – its greatest distance from the sun on the sky’s dome – on September 12. At that time, it’ll be 18o west of the sun, or low in the east before sunrise. Mercury is now rising approximately 90 minutes before sunrise at mid-northern latitudes.

Meanwhile, in the Southern Hemisphere, September 2017 doesn’t offer such a good showing of Mercury in the morning sky. You might need binoculars or a telephoto lens to spot Mercury before sunrise, especially at temperate latitudes.

Click here for an almanac telling you Mercury’s rising time in your sky.

Here’s how to find Mercury. Get up shortly before the sun and find an unobstructed horizon in the direction of sunrise. To increase your chances of spotting Mercury, perch atop a balcony or a hill, so that you can see more sky down to the horizon.

Look eastward for Venus, the brightest starlike object in the morning sky. You can’t miss Venus! Then start searching for Mercury below Venus. Given a clear sky at mid-northern latitudes, you might spot Mercury near the sunrise point on the horizon with the eye alone around 80 to 70 minutes before sunrise. If you get up less than one hour before sunrise, you might need binoculars to see Mercury in the encroaching morning twilight.

If you have good eyesight, you might also see Mercury pairing up with the star Regulus. How will you know which is Mercury and which is Regulus? Both will look like “stars,” but only Regulus is a true star. You can tell them apart easily, though, because Mercury will be shining 3 to 4 times more brightly than Regulus. If you see Mercury and not Regulus, try aiming binoculars toward Mercury. You might be able to view Mercury and Regulus in the same binocular field.

After the morning of September 10, the gap between Mercury and Regulus will increase, as Regulus climbs toward Venus in the morning sky.

Mercury will stay lower in the sky, but – here’s the good news – it’ll brighten day by day.

In the meantime, Mars is also now climbing out of the glare of morning twilight and will meet up with Mercury on September 16, 2017.

Bottom line: On the morning of September 10 – and in the few mornings after that – look for the planet Mercury and the star Regulus to couple up together before sunrise. You’ll find them in the east, below bright Venus.

Thank you! Your submission has been received!
Oops! Something went wrong while submitting the form.
END_OF_DOCUMENT_TOKEN_TO_BE_REPLACED