Spectacular Moon and Venus May 22 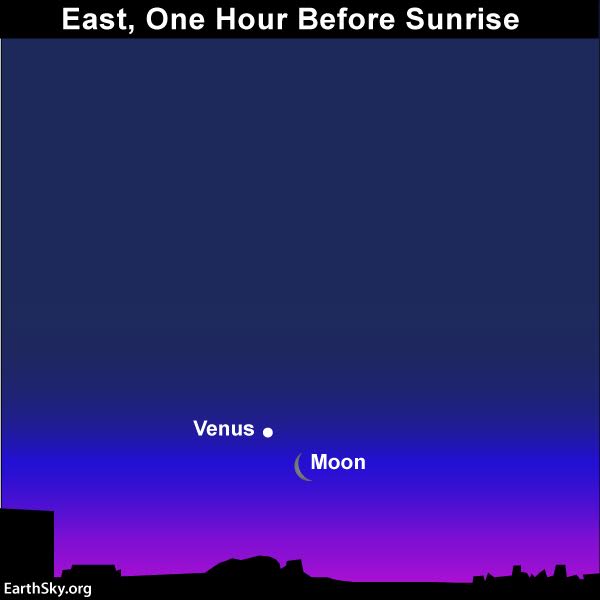 Tomorrow – May 22, 2017 – get up an hour or two before sunrise to see the moon and planet Venus, the second-brightest and third-brightest objects in the sky after the sun. The brilliant twosome will be near each other, a beautiful and compelling sight as seen from around the globe.

We’ll all be able to see these worlds shining in our dawn sky, but folks at southerly latitudes have the better view. Southern Hemisphere observers will see the moon and Venus lighting up the morning sky for a much longer period before sunrise than we will at more northerly latitudes.

In fact, the farther south you are on Earth’s globe on May 22, the bigger your advantage for catching the moon and Venus in the predawn/dawn sky. For example – on May 22, 2017 at Anchorage, Alaska (61o north latitude) – the moon rises about 12 minutes before sunrise, and Venus comes up about 35 minutes before the sun. On this same date at Honolulu, Hawaii (21o north latitude), the moon and Venus both come up well over two hours before sunrise.

At the more southerly latitudes, you also have a good chance of spotting Mercury, the innermost planet of the solar system. For example, Mercury follows Venus into the sky about one and one-quarter hours before sunrise on May 22 from Honolulu, Hawaii.

Bottom line: From around the world on the morning of May 22, 2017, you’ll find a picturesque scene in the east before dawn, as the waning crescent moon and very bright planet Venus pair up at early dawn.

Thank you! Your submission has been received!
Oops! Something went wrong while submitting the form.
END_OF_DOCUMENT_TOKEN_TO_BE_REPLACED