Come to know the Pleiades, or 7 Sisters

At this time of year, for all of us around the globe, the Pleiades star cluster culminates – reaches its highest point in the sky – around midnight.

Image at top: A laser pointer aims up past the V-shaped face of Taurus the Bull, toward the tiny, misty dipper of the Pleiades. Photo by Krishnan Subramanian near Mumbai, India.

Tonight, look for the tiny, misty dipper of stars known as the Pleiades or Seven Sisters. November is the month of the Pleiades star cluster. On these November nights, the Pleiades cluster shines from nightfall until dawn. It’s low in the east at nightfall, high overhead around midnight and low in the west before dawn. Locate it by the bright star Aldebaran this evening, or any evening soon.

You can view the Pleiades with either the unaided eye or an optical aid on these November nights. The Pleiades cluster is one of the most recognizable star patterns in the night sky. Its six brightest stars do look like a little dipper. In fact, people in the Northern Hemisphere often mistake the Pleiades for the real Little Dipper asterism, which is located farther north on the sky’s dome. The misty-looking dipper of the Pleiades hovers over the northeastern horizon as darkness falls. It moves across the night sky from east to west, much like the sun does during the day.

Do you love stargazing? Order an EarthSky planisphere 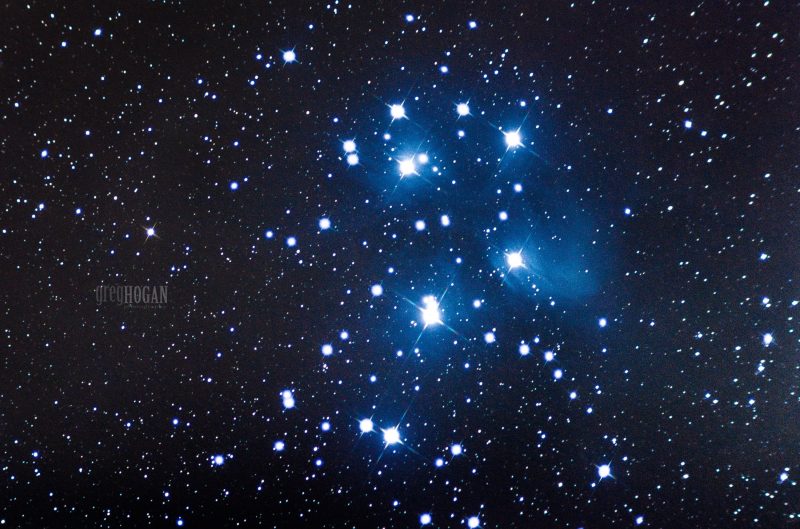 EarthSky community member Greg Hogan captured this image of the Pleiades in November 2015.

By the way, another name for the Pleiades is the Seven Sisters. But if you look with your eye alone, it’s likely you’ll only see six stars in the Pleiades. Some old Greek legends explore what might have happened to the missing sister, sometimes called the Lost Pleiad.

In the Northern Hemisphere, the Pleiades’ all-night appearance coincides with late autumn. As this part of the world moves toward winter, it’s easy to imagine the Pleiades as a frosty patch on the dome of night. But in the Southern Hemisphere now, where spring flowers are blooming, this cluster of nocturnal suns watches over the season of awakening and agriculture. In South Africa, for example, the Pleiades are called the hoeing stars.

Yearly, on or near November 21, the Pleiades cluster culminates – reaches its highest point in the sky – at midnight. (In this instance, midnight means midway between sunset and sunrise.) Historically, the midnight culmination of the Pleiades was very significant to many ancient peoples. Some of these Pleiades midnight celebrations still linger into the present, such as the old Druid rite of Halloween. Although the midnight culmination date for the Pleiades advances over the long course of time, the date of Halloween has remained fixed by tradition. 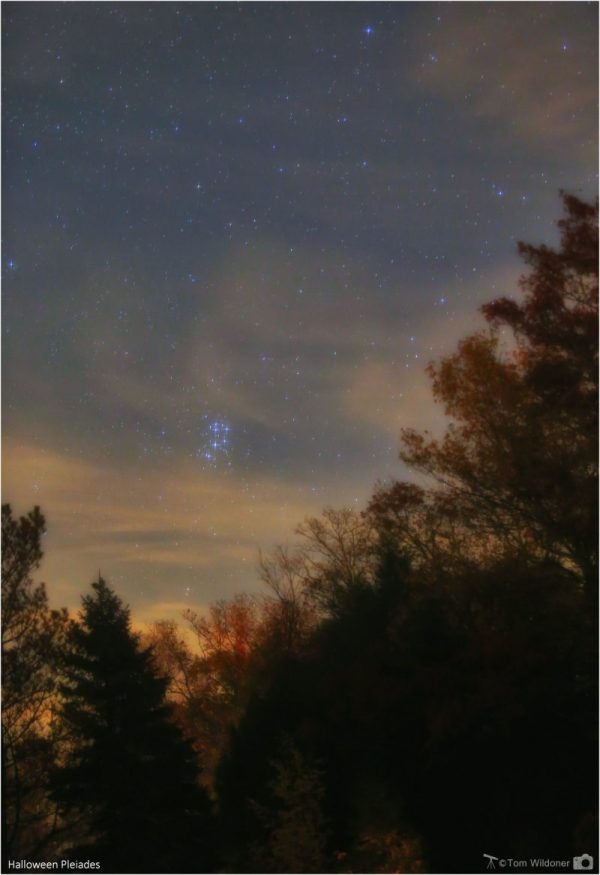 Tom Wildoner of LeisurelyScientist.com captured this image of the Pleiades on October 31, 2016.

Bottom line: Watch for the sky’s most celebrated star cluster – the Pleiades – a tiny, misty dipper-shaped star cluster adorning the sky all night long on these November nights.