Moon’s lit side points to Aldebaran 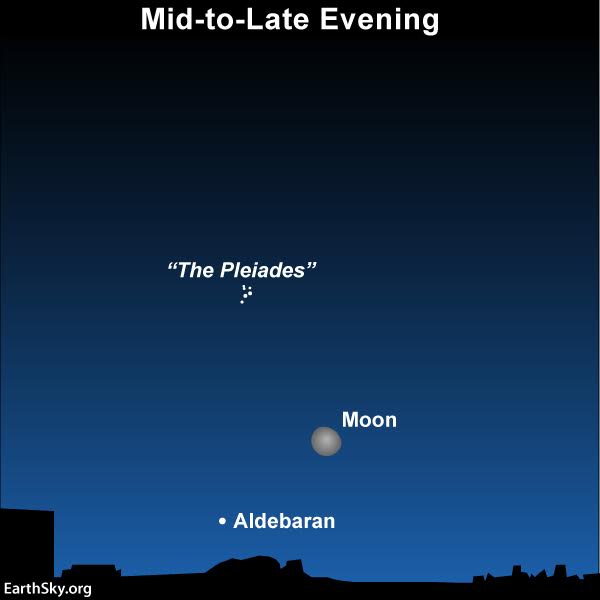 Tonight – October 8, 2017 – you’ll have to stay up fairly late this evening (10 p.m. or so at mid-northern latitudes) to see the waning gibbous moon and Aldebaran in your sky. This star represents the fiery eye of the Bull in the constellation Taurus. After the moon and Aldebaran rise over the eastern horizon, they climb upward together until reaching their high point for the night in the wee hours before dawn. If you’re up in the predawn hours tomorrow, on October 9, look for the moon and Aldebaran high in your southern sky from mid-northern latitudes. From the Southern Hemisphere, look in your northern sky.

Because the rising times for the moon and Aldebaran vary around the world, you might want to refer to the links on our almanac page. You can also find out the rising time for Aldebaran via the U.S. Naval Observatory.

The lit side of the waning gibbous moon will be pointing toward Aldebaran on the night of October 8-9. To reduce the lunar glare, try blotting out the moon with your finger to see Aldebaran better. Be aware that the illuminated side of a waning moon always points in the moon’s direction of travel: eastward through the constellations of the zodiac.

From much of Asia, it’s possible that the moon will block out Aldebaran for portion of your night on October 9-10. That’s because the moon will occult – cover over – Aldebaran as the moon travels eastward in front of the constellation Taurus the Bull. Aldebaran will disappear behind the lit side of the moon and reappear on the moon’s dark side.

As seen from Shijiazhuang, China, the moon will occult Aldebaran on October 10 from 1:16 to 2:20 a.m. China Standard Time (CST).

Click here to know when this occultation will take place for hundreds of other Asian localities in Universal Time (UTC). Here’s how to convert Universal Time to your local time.

It might be difficult to see the beginning of this occultation, because the star will disappear behind the moon’s illuminated side, only to reappear on the moon’s dark side.

Around the world tonight (October 8), look for moon’s lit side to point toward Aldebaran, as these two luminaries rise in the east late this evening.

Bottom line: Tonight – October 8, 2017 – you’ll have to stay up fairly late to see the waning gibbous moon near Aldebaran. This star represents the fiery eye of the Bull in the constellation Taurus. From Asia, the moon will pass directly in front of Aldebaran on the night of October 9-10.

The lunar calendars are almost here! View the moon phases throughout the year.

Thank you! Your submission has been received!
Oops! Something went wrong while submitting the form.
END_OF_DOCUMENT_TOKEN_TO_BE_REPLACED