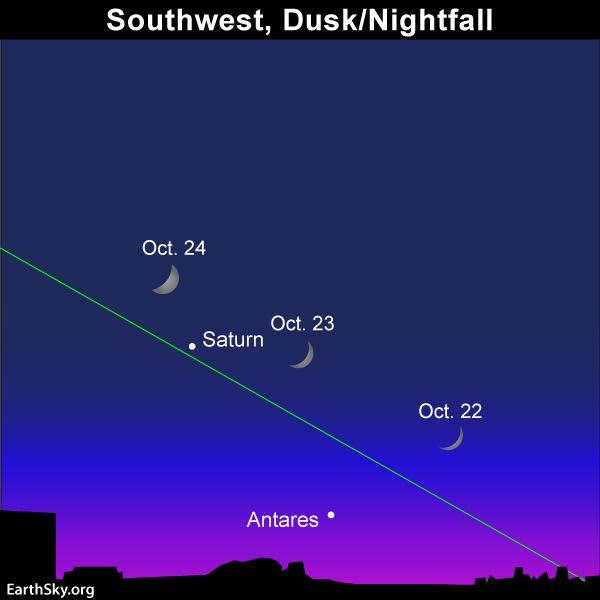 Tonight – October 23, 2017 – and tomorrow night, let the waxing crescent moon be your guide to the planet Saturn. The moon will be easy to spot above the sunset point. That nearby bright starlike object will be Saturn, 6th planet outward from the sun. Seek for the moon and Saturn as soon as darkness falls, or when these two celestial beauties are highest up for the night. From mid-northern latitudes, the moon and Saturn follow the sun beneath the horizon by early-to-mid evening; and from the Southern Hemisphere, these two worlds set at late evening.

Click here for recommended almanacs; they can tell you when the moon and Saturn will set in your sky.

Although the moon and Saturn are close together on the great dome of sky, these two worlds are nowhere close together in space. The moon, our closest celestial neighbor is little over 251,000 miles (404,000 km) from Earth; yet Saturn, the farthest world that you can easily see with the unaided eye, lodges way out there, at nearly four thousand times the moon’s distance from us.

The feature sky chart at top is designed for mid-northern North American latitudes and, for visual purposes, exaggerates the size of the moon. In the world’s Eastern Hemisphere – Europe, Africa, Asia, Indonesia, Australia and New Zealand – the moon’s position will be offset somewhat toward the previous date. Nonetheless, as seen from around the world, the nearby bright point of light in the moon’s vicinity tonight and tomorrow night will be Saturn.

You won’t have too much longer to see Saturn in the evening sky. This world is quickly sinking toward the glare of sunset day by day, to disappear from the evening sky by late November or early December 2017.

Bottom line: At nightfall tonight and tomorrow night – on October 23 and 24, 2017 – use the moon to locate the planet Saturn, whose rings can be seen through a modest, backyard telescope.

Thank you! Your submission has been received!
Oops! Something went wrong while submitting the form.
END_OF_DOCUMENT_TOKEN_TO_BE_REPLACED