1st quarter moon and Regulus May 21 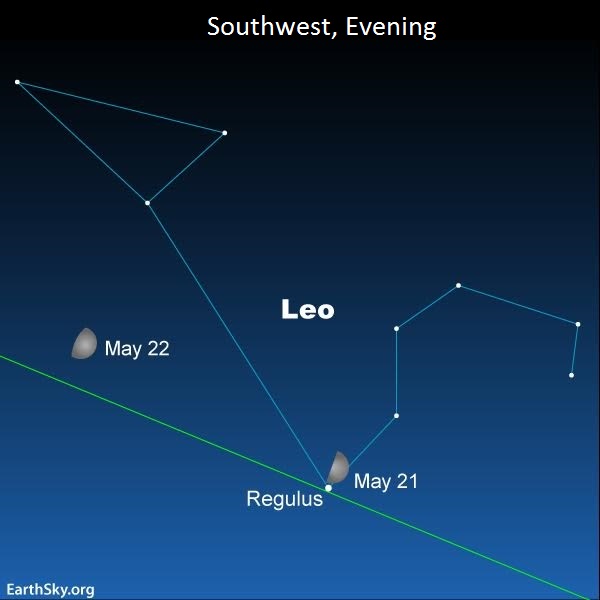 Tonight – May 21, 2018 – the half-lit first quarter moon passes 1.5 degrees (3 moon-diameters) north of Regulus, the brightest star in the constellation Leo the Lion. Nearly everyone worldwide can use the moon to find the star Regulus on this night.

Just look for the moon in the evening sky. The nearby bright star will be Regulus.

There’s little chance of mistaking another star for Regulus, because Regulus is the only bright object within a stone’s throw of the May 21 moon. Still, you’ll find two much-brighter “stars” in the May 21 sky. A long jump to the east (toward the sunrise direction) is a planet, giant Jupiter. It’s the second-brightest starlike object in the May evening sky. And the brightest starlike object? That would be Venus, now sitting in the west at nightfall and early evening, setting not long after the sun.

You should start to notice for the moon in the vicinity of Jupiter beginning around May 25.

No matter where you live worldwide, the moon always moves eastward relative to backdrop stars (and planets) of the zodiac. That’s in spite of the fact that the moon and Regulus move westward across the sky (like the sun in daytime) because of the Earth’s rotation. That eastward motion of the moon relative to the backdrop stars is caused by the moon’s orbit around Earth. Starting tonight and over the next several days, you can notice the orbital motion of the moon as it keeps traveling eastward of the star Regulus.

Bottom line: Tonight – May 21, 2018 – the first quarter moon pairs up with the star Regulus, the brightest star in the constellation Leo the Lion.

Thank you! Your submission has been received!
Oops! Something went wrong while submitting the form.
END_OF_DOCUMENT_TOKEN_TO_BE_REPLACED