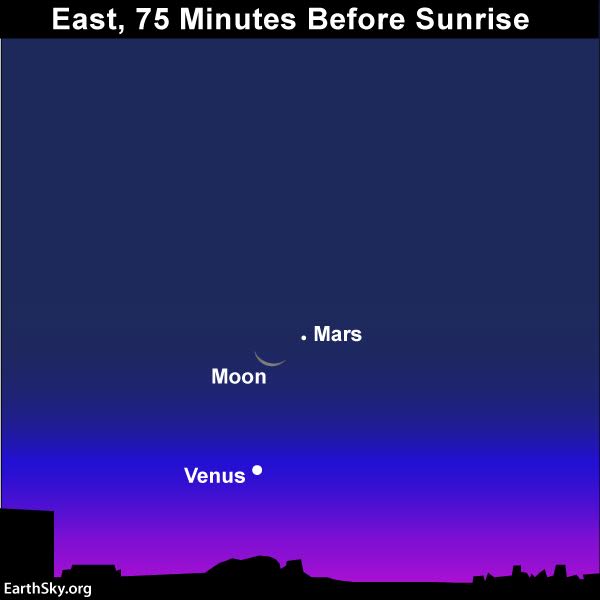 Before dawn tomorrow – October 17, 2017 – continue watching the spectacular moon and planets before dawn. The waning moon and Venus will easily catch your eye. The faint starlike point of light near the moon is the red planet Mars. Dazzling Venus outshines Mars by some 200 times now.

Click here for recommended almanacs; they can give you the rising times for the moon, Mars, Venus and the sun in your sky.

Earth orbits the sun in between the orbits of Venus and Mars. Venus is the 2nd planet outward from the sun, and Mars is the 4th. Earth, of course, is the 3rd planet out from our local star.

Why is Mars so faint now, while Venus is so bright? Venus, the larger of these two planets, is always bright in our sky, in part because of its nearness to us, but also because its surface is covered with highly reflective clouds. Mars lacks those thick clouds, and is far across the solar system from Earth now.

Bottom line: Before dawn tomorrow – on October 17, 2017 – watch for the spectacular view of the moon, Mars and Venus.

Thank you! Your submission has been received!
Oops! Something went wrong while submitting the form.
END_OF_DOCUMENT_TOKEN_TO_BE_REPLACED