Moon and Jupiter on May 14 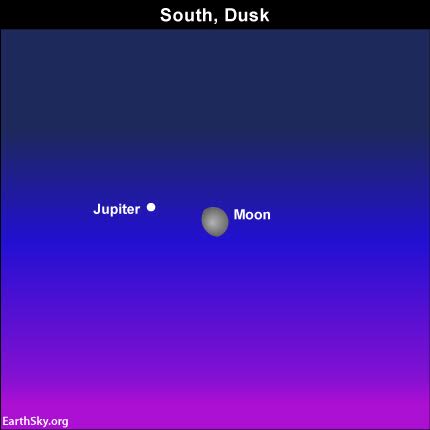 Tonight – May 14, 2016 – the first two celestial bodies to pop out in the sky after sunset are the waxing gibbous moon and the king planet Jupiter. From mid-northern attitudes, look for the moon and Jupiter high in your southern sky. From the northern tropics, look overhead. From the Southern Hemisphere, look in your northern sky.

Jupiter is the fifth planet outward from the sun. It ranks as the fourth-brightest celestial body to light up the heavens, after the sun, moon and planet Venus. But Venus is now lost in the glare of the sun, leaving Jupiter to reign as the brightest starlike object in the May and June, 2016, nighttime sky.

As the Earth spins eastward beneath the heavens on the night of May 14, watch as the moon and Jupiter move westward across your sky. They’ll set in the west in the wee hours on the morning on May 15.

As the minutes and hours tick by tonight, the moon will be moving eastward relative to Jupiter and to the backdrop stars of the Zodiac – even as it is moving westward in Earth’s sky.

The eastward motion in front of the stars of the Zodiac comes from the moon’s orbit around Earth. Its apparent westward motion during the night is caused by Earth’s spin under the sky.

How do astronomers know the mass of Jupiter?

By the way, people have been inquiring about the triangle of bright lights in the east at early-to-mid evening. They are, in their order of brilliance, the red planet Mars and the ringed planet Saturn, plus the star Antares.

May 2016 guide to the five naked-eye planets

Bottom line: As darkness falls on May 14, 2016, use the moon to find the king planet Jupiter. Watch for them. Really. They’ll be a sight to see in your sky on Saturday evening.

Thank you! Your submission has been received!
Oops! Something went wrong while submitting the form.
END_OF_DOCUMENT_TOKEN_TO_BE_REPLACED