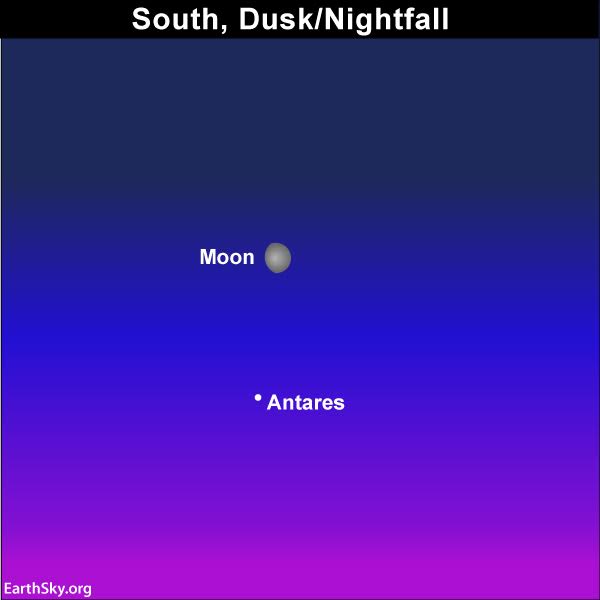 On July 22, 2018, you’ll find the moon moving through the southernmost constellation of the zodiac, Scorpius the Scorpion. The star Antares, brightest star in Scorpius, often described as the Scorpion’s Heart, can be found in the moon’s vicinity. The name Antares derives from ancient Greek and means rival to Ares – that is, rival to Mars. Like Mars, Antares is red in color. Antares is sometimes brighter than Mars, but it’s no match for Mars now!

This July 22 moon is in a waxing gibbous phase. It’s moving toward the full phase on July 27. This full moon will move through the Earth’s dark shadow, to give us the longest total lunar eclipse of the 21st century (2001 to 2100). On that night, Mars will be near the moon.

So, yes, it’s easy to get distracted by Mars now. But watch for Antares, too! From the perspective of mid-northern latitudes, the Scorpion skitters near the southern horizon during the evening hours, with its fishhook-shaped tail scraping along the ground. It might be difficult to view the J-shaped Scorpion in the glaring moonlight on July 22, but, if so, wait until the moon moves away. Even on a moonlit night, though, you can pick out Antares.

One of the fun associations of Scorpius is that of Orion the Hunter, a prominent constellation of our Northern Hemisphere winter evening skies, and also sometimes called the ghost of the summer dawn. According to star lore, Orion – a man of great beauty and a gifted hunter – boasted of his great prowess and was convinced of his own invincibility. He finally met his match, though, in the sting of the mighty Scorpion, sent by the gods. It’s said that the gods immortalized this story by placing the two combatants – Orion and the Scorpion – into the sky as constellations. But, even today, you never see them in the same sky together. Orion never appears in the sky until the Scorpion has left it, and vice versa.

This story – almost certainly – could only have originated in the Northern Hemisphere. In the Southern Hemisphere, New Zealanders see Orion climbing into the eastern sky in the wee hours before dawn right now – and at the same time, see the Scorpion’s stinger stars jutting up into the southwest sky. Not too surprisingly, many native Polynesians associate a different story with the constellation Scorpius, viewing its graceful J-shaped curve of stars as a Magic Fishhook.

Bottom line: On July 22, 2018, the bright waxing gibbous moon closely pairs up with Antares, heart of the Scorpion in the constellation Scorpius. The name Antares derives from ancient Greek and means rival to Ares – that is, rival to Mars. Like Mars, Antares is red in color. Antares is sometimes brighter than Mars, but it’s no match for Mars now! Watch for Mars near the moon on July 27, 2018, when those in Earth’s Eastern Hemisphere will see a total eclipse of the moon.

Orion the Hunter: Ghost of the summer dawn

Thank you! Your submission has been received!
Oops! Something went wrong while submitting the form.
END_OF_DOCUMENT_TOKEN_TO_BE_REPLACED