Mercury beneath Venus in western dusk 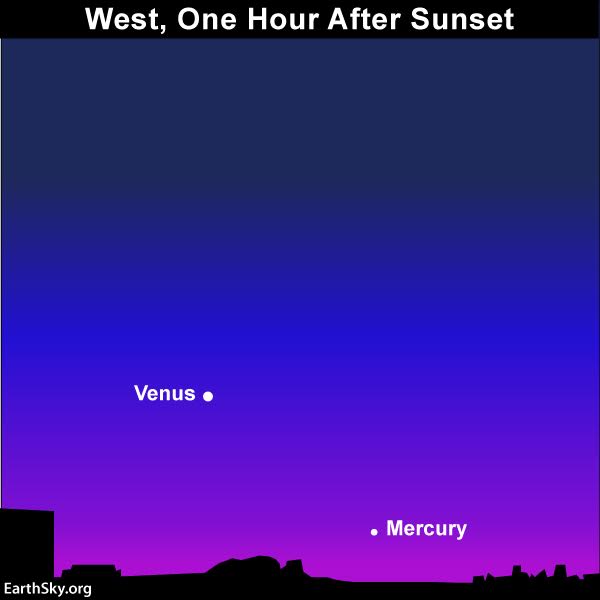 In late June 2018 – as dusk ebbs into darkness – try to catch the planet Mercury beneath Venus, the sky’s brightest planet. If you can spot Mercury around 60 to 90 minutes after sunset, then you have a good chance of spotting all 5 bright planets tonight (June 29, 2018) and for several weeks to come.

The 5 bright planets, which can be viewed with the eye alone and which have been observed since time immemorial, are Mercury, Venus, Mars, Jupiter and Saturn. Far and away, Mercury, the innermost planet, will be the hardest to see. Mercury is only visible at dusk and/or early evening, and follows the sun beneath the horizon by the time that it gets good and dark.

Here’s how to catch Mercury. Find an unobstructed horizon in the direction of sunset. Venus, the third-brightest celestial object, after the sun and moon, should be rather easy to see in your western sky around 30 to 45 minutes after sundown. Some people will probably spot Venus even sooner after sundown. Then look for Mercury beneath Venus about 60 to 90 minutes after sunset. If you can’t see Mercury with the unaided eye, by all means try your luck with binoculars.

Don’t fret if you miss Mercury beneath Venus this evening. The next couple of weeks should be fine for viewing Mercury below Venus in the Northern Hemisphere. For our friends in the Southern Hemisphere, July 2018 will feature the best evening apparition of Mercury for the year. Click here for a sky almanac providing the setting time for Mercury in your sky.

Last but not least, look for the red planet Mars to rise in the east to southeast sky after Venus follows the sun beneath the horizon. Seek for Mars, which is about the same brightness as Jupiter, beneath the golden planet Saturn. Click here for a recommended almanac providing Venus’ setting time and Mars’ rising time in your sky.

Thank you! Your submission has been received!
Oops! Something went wrong while submitting the form.
END_OF_DOCUMENT_TOKEN_TO_BE_REPLACED